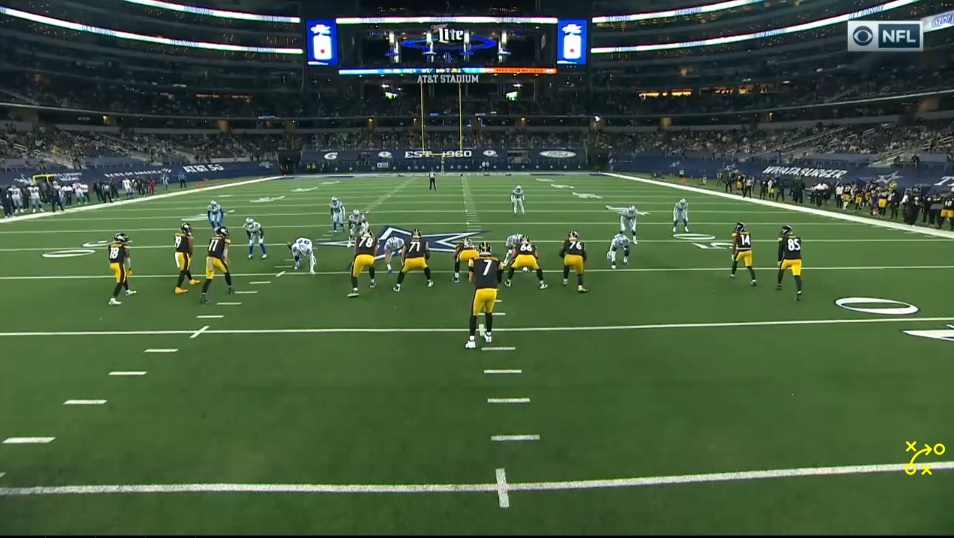 Much like the Pittsburgh Steelers’ Week 8 win over the Baltimore Ravens, Sunday’s offense relied on the team’s 01 personnel against Dallas. No backs, one tight end, and four receivers spread out on the field. It jumpstarted the team in the second half and on the team’s game-winning drive, ending in an eight yard score to Eric Ebron, the offense used 01 exclusively.

Let’s check out what made it so effective.

These are the final four plays of the drive. To be fair, the Steelers were in 01 the first three plays of it. All three fell incomplete though Pittsburgh got bailed out with a roughing the passer call that gave them new life. And Ben Roethlisberger found his groove.

1st and 10. Empty set. Spread the Cowboys out, force them to declare any potential blitzes, and give Roethlisberger plenty of options to work with. Four receivers plus the TE Ebron out there. Cowboys are playing off coverage to the three receiver side. “Catch and release” (like fishermen casting a line) from Roethlisberger to hit Claypool on a quick screen. 6’4, 230 pound player now has a head of steam and he picks up nine to make it 2nd and 1.

Next play. 42 yard completion to Diontae Johnson. Empty again. Cowboys playing soft, zone coverage. RCB is Saivion Smith, replacing the injured Trevon Diggs, whose arguably been their best cornerback this season. Roethlisberger knows to go after him. Smith is playing bail technique, worried about getting beat deep, and Johnson runs a ten yard out against him. Pitch and catch and Johnson does the rest, breaking Smith’s tackle and weaving downfield for a 42 yard pickup.

1st and ten in the red zone. Again, empty. Again, Dallas is playing soft zone. Steelers try to run their pump fake screen to hit the seam but the Cowboys don’t bite. Roethlisberger simply goes back to the original fake, hitting Claypool on another smoke screen with the Cowboys playing off to protect the seam.

Five more yards and the offense remains on schedule.

Finally, the TD. Empty again. Cowboys playing loose zone, spread out and afraid to roll up on anyone, especially given the Steelers’ preference to run rubs and crossers. Chase Claypool and JuJu Smith-Schuster release vertical to hold the DBs while Ebron runs into the flat. Flat defender isn’t there or doesn’t get width and it’s another easy catch. Looks like a 7v7 drill.

Ebron, as Roethlisberger said, shows he’s an athlete with a great hurdle and finish into the end zone. Touchdown Steelers.

There wasn’t anything mystical or magical about it. Spread the defense out, load up with weapons, and force the opposition to play conservative and pick them apart. It is frustrating this has been the only semblance of offense the last two weeks, especially against the Cowboys’ lowly unit, but it’s been highly effective. As JuJu Smith-Schuster said yesterday, it’s probably time to make this part of the gameplan as opposed to a last resort when nothing else is working.