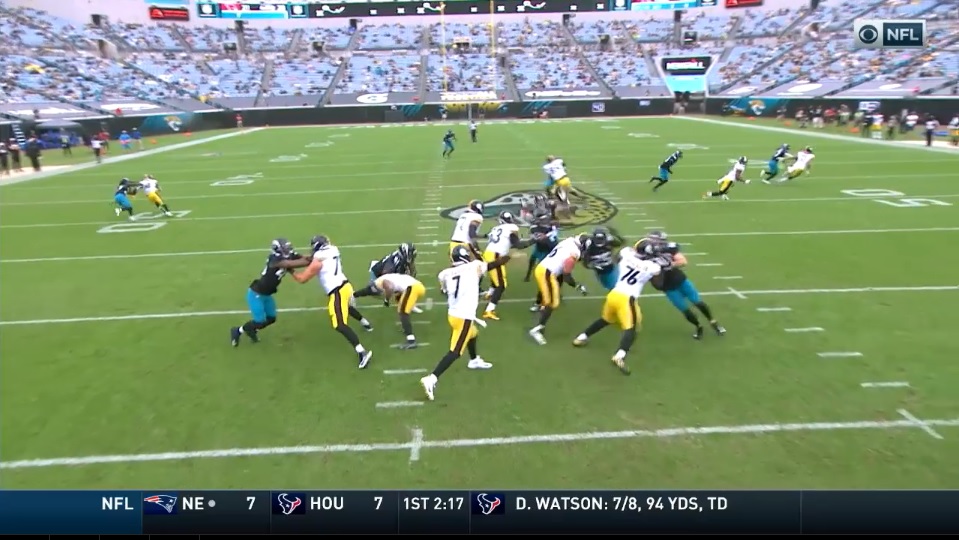 There’s no question the Pittsburgh Steelers’ run game has fallen flat over the past five games. They took steps in the right direction Sunday against the Jacksonville Jaguars and James Conner did a really good job of creating on his own. Still, there’s work to be done.

The great thing about Conner is his value is that it isn’t solely tied to the run game. He’s a well-rounded, three-down runner. Able to help the Steelers’ offense even when the run game is going nowhere. For the past couple weeks, he’s been as good as ever in pass protection. It’s an area of his game he’s shown steady improvement on since his sophomore season and one reason why Ben Roethlisberger has barely been touched, sacked just twice over the last five games.

An example from Sunday’s win over Jacksonville. Completion to Chase Claypool along the right side. Jaguars routinely brought pressure against Roethlisberger, partly in an effort to make up for a lackluster front four not getting home. DC Todd Wash also got creative with how he tried to generate pressure too. Like he did on this play.

Lines up #41 Josh Allen, their top pass rusher, off ball, to blitz behind #47 who shoots down into the A gap, drawing the eyes of LG Matt Feiler. Conner’s fearless picking up the block. Goes low, cuts him, and flips Allen over. Roethlisberger is kept clean and makes the throw to the sideline.

But Conner’s been strong in pass pro for weeks. What he did two weeks ago against the Cincinnati Bengals was even more impressive. Tons of examples of his sturdy pass pro in that game. Here, nice key and scan of safety Vonn Bell flying off the edge. Conner gets himself in position, square to the block, and keeps the pocket clean. Roethlisberger hits Diontae Johnson for an 18 yard gain.

Same thing against Bell in this clip. Sees Bell blitzing up the B gap and goes low to chop him and take out his legs. Gives Roethlisberger time to air it out right side, though his pass is incomplete.

Similar rep here. Not as strong here, Conner’s inside shoulder is too soft and he’s not square to the block but he holds up enough to stun the LB and let Roethlisberger fire away. He hits Chase Claypool over the middle for the touchdown.

Nice pickup here. Bengals showing pressure by mugging both linebackers into the A gap. Half-slide with Maurkice Pouncey sliding right to pick up the LILB while Conner comes across to pick off the RILB, rookie Logan Wilson. Gets to his spot, square to the block, and doesn’t give up an inch of ground. That’s a backs on ‘backers drill from camp in action.

There’s some edge pressure on the play that gets home and disrupts the throw but Conner does his job.

One last example from this game. Again, Conner scans and sees the DB blitzing off the offense’s right edge. Sees it, picks it up, and turns the blitzer inside. Roethlisberger rolls outside and hits JuJu Smith-Schuster for the completion.

Let’s take a look at an example from the Cowboys game three weeks ago, too. #54 Jaylon Smith shows blitz posture pre-snap. Conner comes across the formation on the snap and picks him up. Same technique as before. Physical, square, and picks Smith up. Loses him a little bit at the end but it’s more than enough for Roethlisberger to get the ball away. Pass complete to Eric Ebron.

That’s why Conner is the team’s feature back. For a team who throws the ball as much as the Steelers do, Roethlisberger has attempted 40+ passes in four of his last five games (despite them all coming in victories), they need someone who can protect him. Conner is one reason why Roethlisberger is being sacked at such low levels. It’s not the only factor, Roethlisberger’s quick release, are offensive line play larger roles, but Conner is an easy guy to trust when it comes to recognition and execution.