Zach Banner was supposed to be the Pittsburgh Steelers’ starting right tackle this season. And he was…until he wasn’t, unfortunately tearing his ACL in the Week One opener. That thrust third-year tackle Chukwuma Okorafor into action. With the way he’s performed, the Steelers are sure thankful this Thanksgiving for his depth.

Not that Okorafor has been perfect. But he had one of the best reps I’ve seen from him in his young career Sunday against the Jacksonville Jaguars. Quick look at it today.

In the clip below, he’s facing against the Jags’ top pass rusher Josh Allen. Allen hasn’t been amazing this year but is an athletic, twitchy pass rusher who leads the team in sacks. But Okorafor stuffs him here.

Starts with his set. Fires quickly off the ball with a 45 degree kick slide. Strong punch with proper hand placement, keeping his hands inside and into Allen’s chest. Allen tries to shed but Okorafor is too strong and Allen’s attempt to chop down Okorafor’s outside/right arm fails. Okorafor doubles over but he stays with the block. 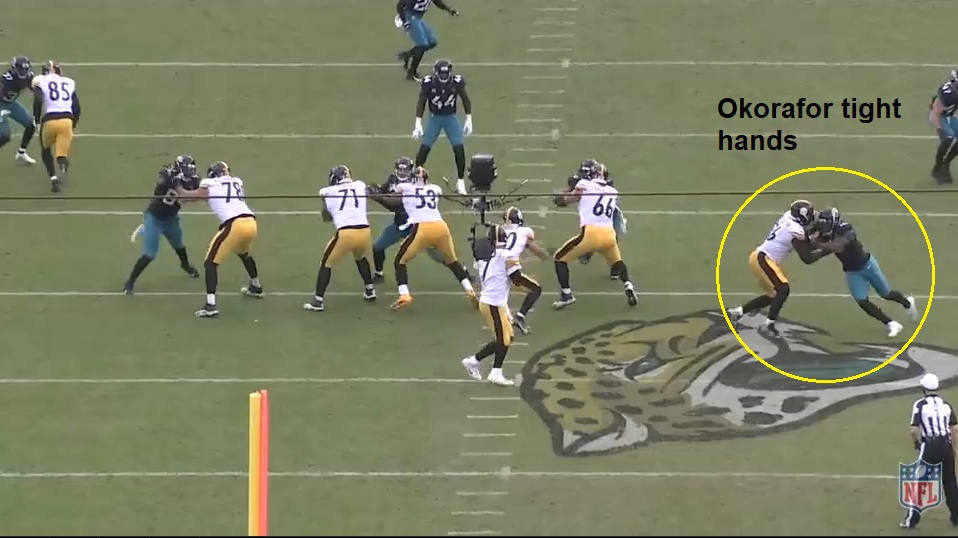 Okorafor keeps his feet moving and sticks to him the whole time, three or four seconds engaged, before Ben Roethlisberger checks down to James Conner.

Check out the whole play.

One of the best pass pro reps I've seen from RT Chukwuma Okorafor all season. In the past, he's had an issue with his punch and keeping his hands inside. No problem here. Good placement in this rep against Josh Allen. #Steelers pic.twitter.com/xmEjjwVfhr

The issue I’ve had with Okorafor over the years has been hand placement and how it correlated to a lack of power. Too often, his punch had been too far outside and he struggled as a run blocker and against bull rushes. Perhaps you can blame some of that on the shoulder injury that plagued him throughout last year or just a third-year player growing with experience and getting stronger.

Again, he’s had his struggles and I’ve say overall, he hasn’t played quite as well as perhaps some think. He has a tendency to overset and have too soft of an inside shoulder and gives up inside rushes and counters too often. But he is growing, he is getting better, and what I saw Sunday against the Jags was encouraging.