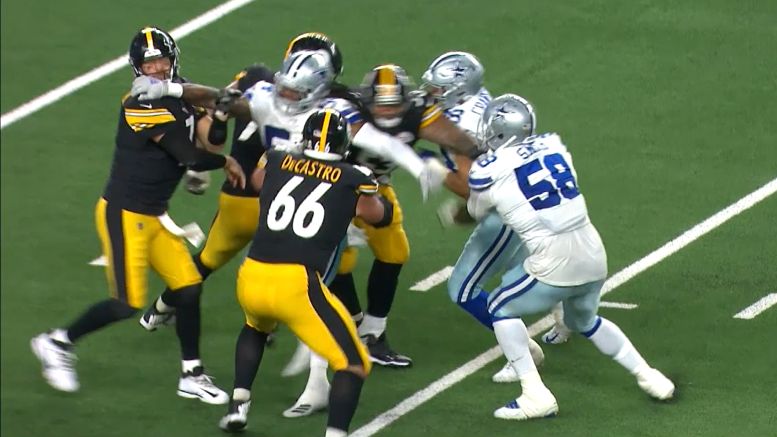 The Dallas Cowboys felt for a while that they could pull off the upset victory over the undefeated Pittsburgh Steelers on Sunday, and really, they came rather close to doing it. They had the opportunity to execute a game-winning drive, twice. The final play of the game was a shot into the end zone that would have given them the win, but Minkah Fitzpatrick batted it down.

Their defense didn’t do them any favors by drawing four penalties across two fourth-quarter drives that allowed them to turn a four-point deficit into a five-point lead with just a little over two minutes to play. And, this might shock you, but they also weren’t thrilled about it.

The first play wasn’t very important, just a simple offside penalty that allowed Ben Roethlisberger to take a deep shot on which he couldn’t connect. The second penalty on the very next play was huge. Jaylon Smith was flagged for illegal contact, rerouting Chase Claypool and knocking him to the ground beyond five yards.

Roethlisberger had the ball knocked out of his hands for a strip sack on the play by Tyrone Crawford, which would have given the Cowboys the ball in Steelers territory. The penalty wiped that out. Then Leighton Vander Esch was flagged for unnecessary roughness on the next play. This all helped lead them to a field goal that cut the deficit to one.

The last penalty was huge. On third and 10 from their own 21, with 4:03 to play, Roethlisberger threw incomplete deep to Claypool. Smith, however, was flagged for roughing the passer, lunging with his left forearm and hitting the quarterback across the face.

It gave the Steelers a new set of downs at the 36 and they quickly began to work down the field, aided by a 42-yard catch-and-run effort by Diontae Johnson, shortly thereafter finding Eric Ebron leaping over a defender into the end zone for the lead.

“The frustrating part is that it wasn’t in our control and I’m not the one to complain but that was total BS on that last call”,  DeMarcus Lawrence told the Fort Worth Star-Telegram of the roughing penalty. “Hopefully the NFL will can take that into account and we get better from it. I don’t know where that came from but that’s very unacceptable. I don’t know what they saw there”.

“They thought that I hit him and was just crazy over the top”, Smith added in his own defense. “I didn’t really do anything. I was just trying to press the quarterback and put my hand out. We just have to keep fighting”.

That is a pretty charitable description of the play. While many purists, even among Steelers fans, may have objected to the call, the fact is that it was a penalty by rule and it has been called this way for years, especially recently. You cannot hit a quarterback in the head.

Smith’s contact may not have been entirely intentional, but it was forceful enough to twist Roethlisberger’s helmet as his open fist pushed against the facemask, and ultimately led to him spilling to the ground. it is the pass-rusher’s responsibility to pull up and avoid the contact.