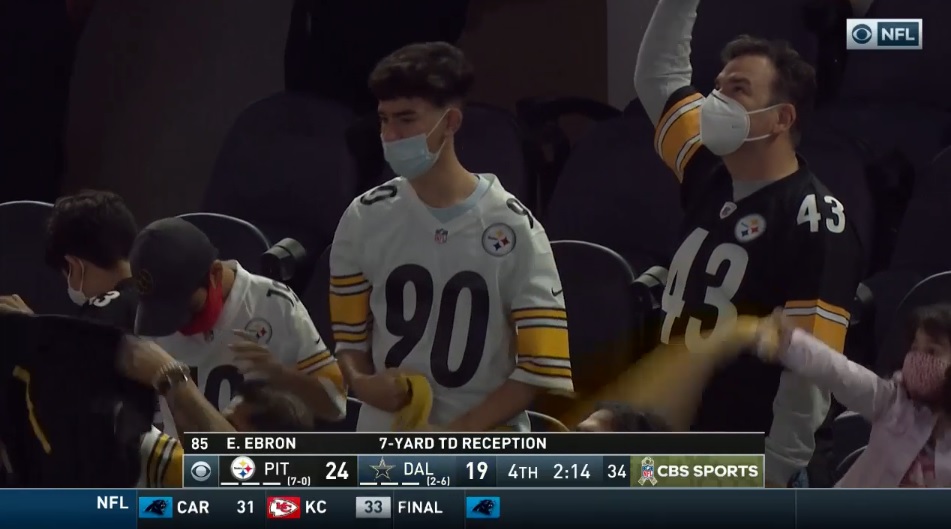 As the story goes, the Pittsburgh Steelers were approached during their 1970s dynasty to be “America’s Team.” Art Rooney, The Chief, declined the moniker, saying they were Pittsburgh’s team, and NFL Films chose Dallas instead. That still holds true today though Ben Roethlisberger might be in favor of some global expansion.

Speaking to reporters after the game, Roethlisberger gave a shoutout to Steelers’ Nation for their continued support.

“We’re the Pittsburgh Steelers,” he told reporters following Sunday’s win. “We know everyone’s coming for us. If you didn’t know who, I’m not trying to take any shots, anybody, but if you didn’t know who America’s team was, you should’ve seen the stands. All The Terrible Towels, Dallas may be America’s team. But we’ll be the world’s team. Cause we’ve got fans everywhere and they’re the best in the world.”

Jerry’s World certainly had a home game feel in this one. Over 30,000 fans attended the game, the NFL’s biggest crowd this season, and it felt like there were as many Steelers’ fans as there were Cowboys’ supporters in the stands. It was noticeable right away, big cheers as Pittsburgh came out of the tunnel before kickoff.

Dallas won the toss and defers to the second half.#HereWeGo pic.twitter.com/rJb1W0XDja

Every big play for the Steelers seemed to result in cheers. Every penalty against them in boos. I’m sure you could hear a “Fire Randy Fichtner” if you turned up the volume loud enough.

Of course, none of this is a surprise to Steelers’ Nation. Many in the national media believe fans travel to these games. Most don’t. Majority of them live in those areas. Families that were displaced a generation ago when the steel mills closed down. Starry-eyed fans who grew up watching that 70s dynasty or the multiple Super Bowl victories of the Roethlisberger era. And few fans are as die hard as Steelers’ Nation.

As Roethlisberger said, that support is felt worldwide. There’s a huge contingency of Steelers’ fans in Mexico. Over 87,000 fans watched the Steelers play a preseason game against the Colts in 2000. If you’ve listened to the Terrible Podcast, there’s a huge fanbase in Brazil along with Ireland and the rest of Europe. There’s even a Steelers’ bar in Rome.

So while The Chief’s proclamation of this being “Pittsburgh’s team” will always ring true, every corner of the Earth is supporting the black and gold.