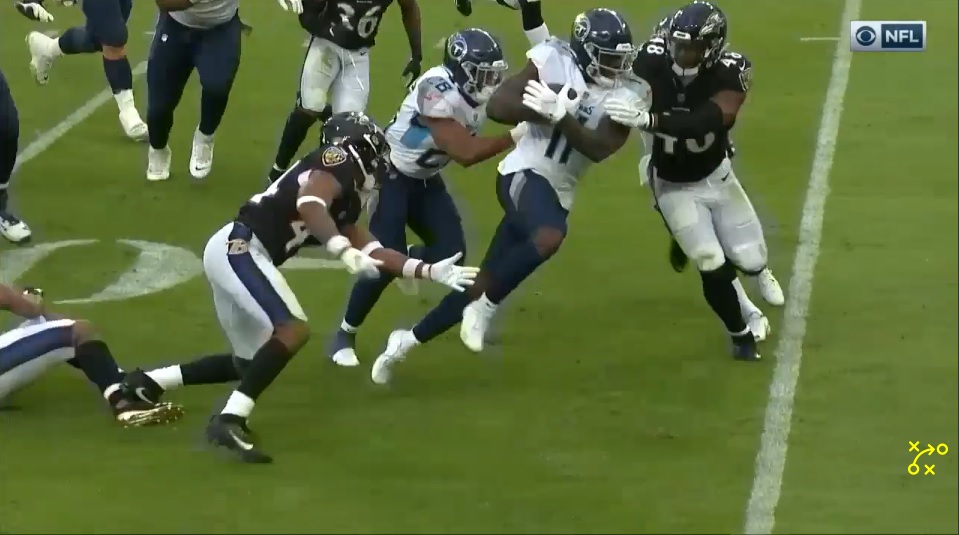 The Colts come out with two receivers to each side and a running back to the left of the quarterback.  The Ravens are in their Nickel defense with the defensive backs in tight over the receivers.

The Colts have T.Y. Hilton (13) wide to the left with Zach Pascal (14) in the left slot. To the right they have Michael Pittman (11) in the slot and tight end Jack Doyle (84) wide to the right.  Before the snap Doyle will go in motion to his left and settle on the wing and safety Chuck Clark (36) will follow him. This move by the defense usually will indicate Man coverage and in this case that is correct.

After the snap quarterback Philip Rivers (17) will fake the handoff to running back Jordan Wilkins (20).  This play action along with Doyle sliding across the formation is going to get the two rookie linebackers Malik Harrison (40) and Patrick Queen (48) to bite on the fake and step up toward the line of scrimmage.

After the fake Rivers will take a quick look at Hilton running a Go route but he doesn’t like the matchup. The two slot receivers are going to run crossing routes in the middle of the field to try to rub off one of the DB’s in Man coverage. Rivers sees Pascal create separation against the slot corner Terrell Bonds (38) and hits him for a 20 yard gain.

Steelers Scenario – In this play if Ben Roethlisberger sees a one on one situation on the Go route he is probably going to take that nine times out of ten. The crossing routes would be the second option with the TE in the flat the last option.  Diontae Johnson would be the Go route with JuJu Smith-Schuster and Chase Claypool on the crossing routes.

Indianapolis lines up with a tight end to the left with two receivers tight to his left. To the right is a lone receiver in the slot with and running back seven yards behind the quarterback who is under center. The Ravens are again in their Nickel defense.

To the defense the toss from the QB will look like it’s going to the running back but it will go to Harris on the end around.  Doyle who is out in front will act like he is going to block the defensive end Jaylon Ferguson (45). This will freeze Ferguson for a beat as Doyle continues outside and heads for the DB Marcus Peters (24) and takes him out of the play. The receiver to that side Hilton will block down inside on the safety Clark. The right tackle also went for Clark but if he gets out in front this play is even bigger.

Harris is able to beat LB Harrison around the edge and is 10 yards downfield before safety DeShon Elliott (32) makes the stop.

Steelers Scenario – The Colts ran Harris around the edge a couple times with Ferguson on that side. They must have noticed something on film when he is on the field. This is a formation the Steelers use with two receivers tight to the formation with Smith-Schuster usually being closest to the tight end with Claypool or James Washington on the outside. In fact, the Steelers ran a play just like this with Claypool for no gain against Cincinnati. Teams are keying on Claypool runs so try it with Washington or get Ray-Ray McCloud in there for this play.

With heavy personnel on the field the interestingly Colts go with an empty formation. RB Wilkins is wide left with wide receiver Daurice Fountain (10) in the slot to the left. To the right they have TE Mo Allie-Cox (81) in the tight slot, Doyle in the slot and TE Trey Burton wide to the right.

Baltimore does its best to matchup defender with receiver in the Man coverage situation.  Linebacker Chris Board (49) is on Wilkins with Jimmy Smith (22) in the slot with Fountain.  On the other side Peters is on Burton, Clark is on Doyle and Matthew Judon (99) is on Allie-Cox.  This play is all about finding the best matchup. In this case that matchup is with Judon.

To the left they run a shallow In and an Out route from the slot to clear out the left side.  To the right they run three In routes. Rivers will look left all the way to keep Smith thinking it’s coming his way with the plan to come back to Allie-Cox over the middle for 17 yards.

Steelers Scenario – The Steelers wouldn’t run this out of 13 personnel but they could do it out of 12 or 22. The key is to have Baltimore in their base defense to get the best matchup. Out of 12, use James Conner and Smith-Schuster to the left. Johnson out wide right with Vance McDonald in the slot and Ebron in the route vs Judon. Out of 22, put Derek Watt wide left with Claypool in left slot. Conner goes wide right and tight ends stay in the same spots.