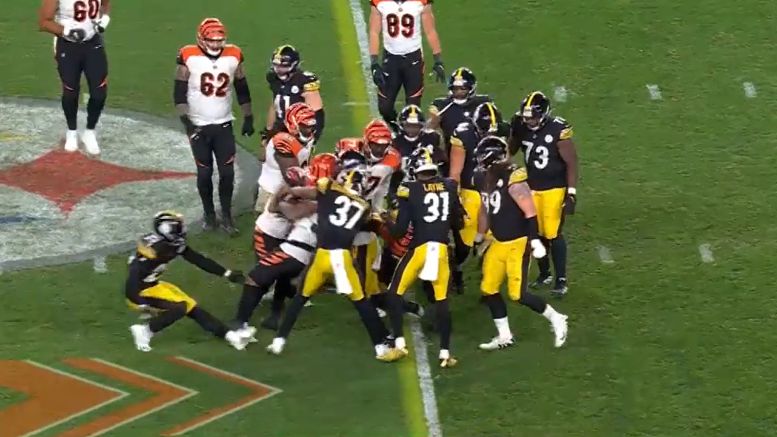 Reasoning: After receiving playing time on defense under meaningful circumstances for the past four games, second-year cornerback Justin Layne’s only playing time on Sunday against the Cincinnati Bengals came on the final five plays of the game, which was a 36-10 blowout.

A third-round pick a year ago, Justin Layne is a young defensive back about whom the Steelers remain hopeful is capable of developing into a positive and frequent contributor to the defense over time. Currently, he is not needed to serve in that capacity, but it was encouraging in recent weeks to see him get some dime playing time with Mike Hilton missing the past four games.

Thus, it was discouraging when the was not out there in the dime defense against the Cincinnati Bengals on Sunday—in spite of the fact that the Steelers used their dime extensively against a Bengals offense that uses a lot of pass-heavy sets.

Instead, they defense relied upon a pair of young safeties in Marcus Allen, more of a veteran, and Antoine Brooks, a sixth-round rookie receiving the first defensive playing time of his career. Was this simply a matter of getting the look that they wanted, or an indication of the team being disappointed in what Layne had been showing—or both?

With Hilton seemingly on his way back into the lineup, it’s likely that Layne’s window for getting defensive playing time this season has come to a close, barring another injury. Sutton would, of course, be the next man up in the event of any injury ahead of him.

Even in that scenario, would Layne play as a sixth defensive back, or would Allen? Historically, the Steelers have had a preference toward three-safety dime looks rather than having four cornerbacks on the field.

It is unfortunately difficult to gauge the development of young players when they can’t get on the field, and that is the case for the Michigan State product. He logged a total of just 44 snaps on defense. But he is still making plays on special teams, with a big tackle on a punt return on Sunday.