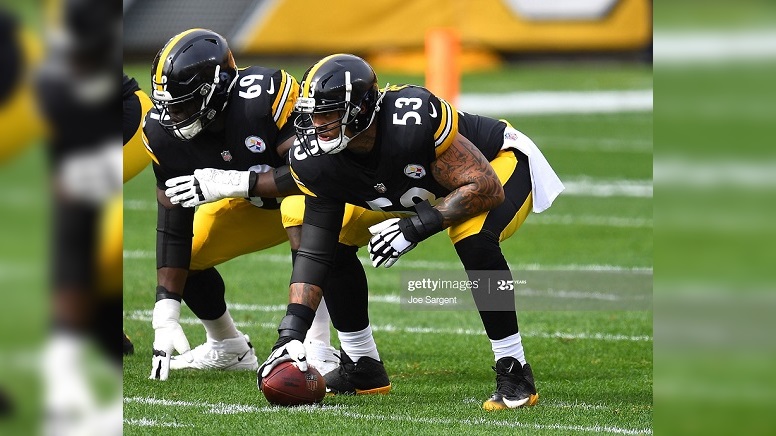 Pittsburgh Steelers rookie guard Kevin Dotson has only been on the team for seven games so far but that’s been long enough for him to make quite an impression on veteran center Maurkice Pouncey. On Friday, Pouncey was asked about the Steelers rookie guard out of Louisiana-Lafayette and he gave quite an in impressive review of him as the team prepares to play the Baltimore Ravens on Sunday at M&T Bank Stadium.

“Kevin Dodson will be a Steeler for a long time,” Pouncey said. “Obviously, he’ll be here. He’s like [David] DeCastro in a way. The way he pass sets, the way he run blocks, he has all the intangibles that you want in an offensive lineman.”

Dotson has already had to star two games this season in place of injured right guard David DeCastro and he has represented himself well in the 190 total offensive snaps that he’s played. While Dotson is now back on the sideline serving as a backup with DeCastro now back healthy, the Steelers have a lot of comfort that their rookie guard can fill in at a moment’s notice.

If things go well for the Steelers the remainder of the season, Dotson won’t play many more offensive snaps. Even if that’s ultimately the case, Dotson will be primed to start at one of the two guard spots in 2021 with DeCastro likely manning the other one.

Currently, veteran Matt Feiler is the team’s starting left guard. Feiler, however, is set to become an unrestricted free agent in March of 2021 and odds are good he’ll ultimately sign with another team.

At Louisiana-Lafayette, Dotson started 52 consecutive games at right guard, so he entered the annual NFL draft with tons of experience at the position and a lot of good tape to boot. Even so, Dotson wound up being a scouting combine snub for some reason. Dotson not going to the combine or having a college pro day limited his exposure to teams and it resulted in him being a gift for the Steelers in the fourth-round of the draft.

While it’s still extremely hard to make any long-term NFL career predictions when it comes to Dotson, his play and demeanor both remind you a little of another great former Steelers offensive lineman, center Dermontti Dawson. It will now be fun to watch Dotson’s career progress and he certainly seems destined to become the future leader of the Steelers offensive linemen room. Pouncey made it sound like on Friday that he’ll be surprised if that doesn’t ultimately happen.

“And he’s a really great kid and I can’t say enough about him,” Pouncey said of Dotson. “Hopefully he keeps his head on the right way and keeps progressing in the right way.”