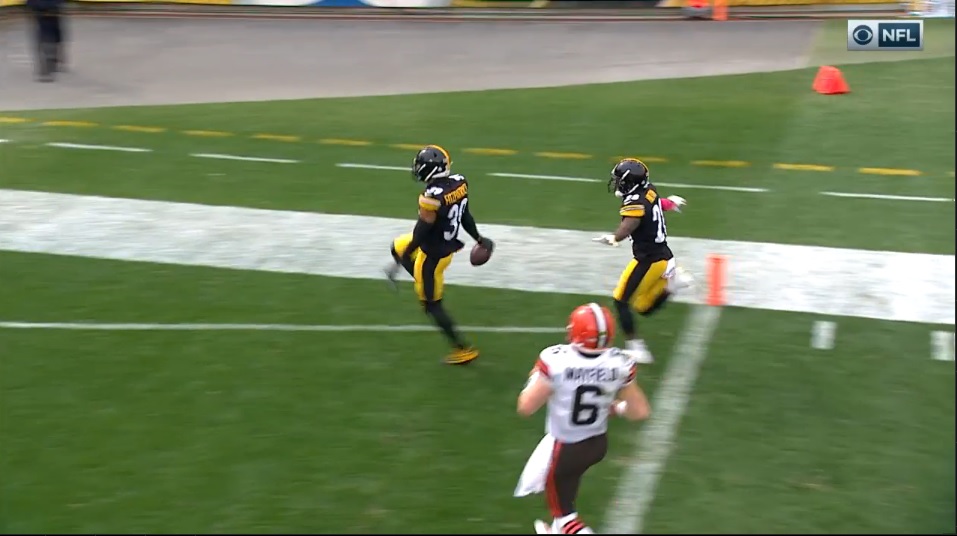 Things weren’t easy for the Cleveland Browns on third down today. They were even tougher when Baker Mayfield tried to throw it Minkah Fitzpatrick’s way. Fitzpatrick helped race the Steelers out to a double-digit lead they wouldn’t give back, a 33 yard snatch and score to put Pittsburgh up 10-0 in the first quarter. Cleveland wouldn’t get any better on third down the rest of the way, converting just once, and Mike Tomlin said Fitzpatrick’s play sent a message to the Browns.

“I don’t know what it does for us,” Tomlin told reporters after the game. “I think it sent a message to them. Third down wasn’t going to be easy sledding today. We needed it.”

Cleveland ended the day just 1/12 on third down and failed to convert on any of their trio of fourth down attempts. In total, 1/15 on 3rd and 4th down conversions. A night and day difference from a week ago, where Carson Wentz and the Eagles carved Pittsburgh up, going 10/14 on third down, including several 3rd and 7+ conversions.

Mike Tomlin and company openly stated their focus was improving on get-off downs this week. Mission accomplished. The Steelers generated constant pressure, contained Mayfield in the pocket, while the secondary plastered and made plays on the football.

For Fitzpatrick, it was his first interception since Week 10 of last season. That play should finally quiet those who have been critical of his play, fans questioning his effort, wondering if he was healthy, and if the Steelers were getting him involved enough. His INT came as a Robber/Rat in the hole, reading the QBs eyes and breaking on the ball. Fitzpatrick had been used as such several times this year. This was his first chance to capitalize and make a play. Tomlin praised him for providing early splash.

“Minkah is an ‘A’ player. He plays ‘A.’ It was a significant play. He’s capable of delivering those types of plays. We’ll keep snapping the ball and watching him do it. That’s the type of player he is.”

Pittsburgh’s defense took the ball away twice against the Browns, continuing their streak as one of the league’s most aggressive and ball-hawking defenses. Cam Sutton had the other interception, also on third down.