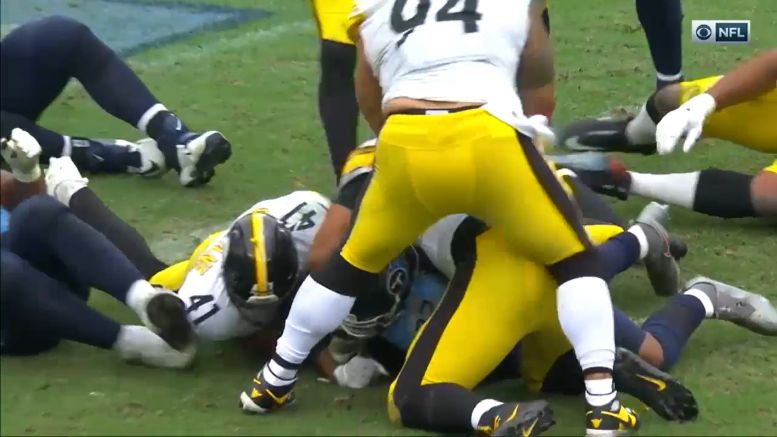 When you have a second-year former college free agent who never played a snap prior to the start of the season replacing a player who played literally every defensive snap of the year up to the point that he suffered a torn ACL, suffice it to say that you can bank on his not being asked to play every snap.

That would apply to most positions outside of, perhaps, along the offensive line or at quarterback—if a quarterback with that sort of pedigree were ever to find himself in such a position, which frankly is not very often.

It is not Robert Spillane’s situation, even though he is the ‘next man up’ for the Pittsburgh Steelers in filling the shoes of Devin Bush, who was lost for the rest of the season last week due to a knee injury. But while yesterday’s game showed that they are not going to ask him to play every single snap, and that they will supplement him with others, it was also clear that he is in the driver’s seat at mack linebacker.

And his teammates have his back.

It’s very tough to fill in that middle linebacker position, especially when you have a player as talented as Devin is”, said T.J. Watt, via transcript, but “we truly believe in the next man up mentality and I feel like Rob Spillane did a great job”.

He did allow that there is plenty of game tape to go over to really see how everybody played, but even head coach Mike Tomlin acknowledged that his young injury replacement played ‘winning football’. He also said that he believed Spillane could play winning ball if they limit his exposure.

This is the same approach that they took in 2013 after Larry Foote’s injury in the season opener, supplementing the base defense with a significant amount of dime. Since Mike Hilton was out for yesterday’s game, they will probably use even more dime once he gets back.

The long and short of it is that Spillane appears to have passed the first test, but there is still a long way to go. The Steelers have 10 more games in the regular season that they have to cobble together with him and Ulysees Gilbert and Cameron Sutton and whoever else might see an increased role due to the absence of their 10th-overall pick.

And facing Lamar Jackson and the Baltimore Ravens with a week of rest will be about as big a test as they are going to face from here on out, especially as a game on the road. Spillane is more athletic than some might think, but he’s not about to keep up with Mark Andrews, let alone shadow Jackson.