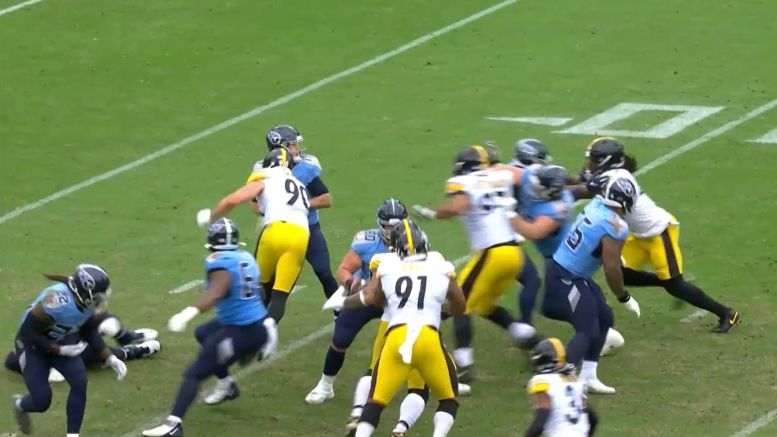 Even though the Pittsburgh Steelers ended up surrendering 24 points to the Tennessee Titans, including 17 points in the second half, there were some standout performances on the defensive side of the ball, players who didn’t really factor significantly into that negative turn the game took.

Aside from the fact that one of the Titans’ touchdowns came on a single 73-yard passing play, Tennessee’s play-to-play consistency and efficiency was far from spectacular. Everything that they got, they earned, outside of perhaps that one major play. Of note was the run defense, which held Derrick Henry to 75 yards, holding his run success rate to under 50 percent, and linebackers Vince Williams and T.J. Watt were key in that.

Both veterans record multiple run-stop tackles against Henry in the game on Sunday, with Watt even registering two tackles for loss. Williams now leads the league with 12 tackles for loss on the season. They also recorded the team’s only two sacks of the game.

And they also made Pro Football Focus’ Team of the Week for week seven of the 2020 regular season. This is far from the first appearance of the season for Watt, but it is for Williams, who finished the game with 10 tackles and a sack.

In fact, Watt was named the defensive player of the week for the outlet, the second time of the season, and he remains their highest-graded defensive player on the year, and the edge rusher with the highest pass-rush grade as well.

Watt put up a 91.8 PFF grade against the Tennessee Titans in Week 7 — his fourth game this year above 90.0. It’s also his 13th game since the start of 2019 in which he earned a grade above 80.0 — four more than second and six more than third. Pittsburgh blitzed far less than they normally had to start out the year. In fact, their blitz rate dropped nearly 20 percentage points from their first six weeks compared to Week 7. That played a part in some production dips by various pieces along the defensive front, but not Watt. He was the only one to make a major dent as a pass-rusher as he came away with a 28.6% pass-rush win rate. That brings his season-long rate to 26.7%, which is 4.5 percentage points higher than any other edge rusher. Oh, and he had the highest single-game run-defense grade of his career at 90.7.

As we noted yesterday, Watt said that he learned from his older brother how to stop Henry, and he applied the techniques of J.J. Watt to his own game to record a couple of clear wins for his defense during the game.