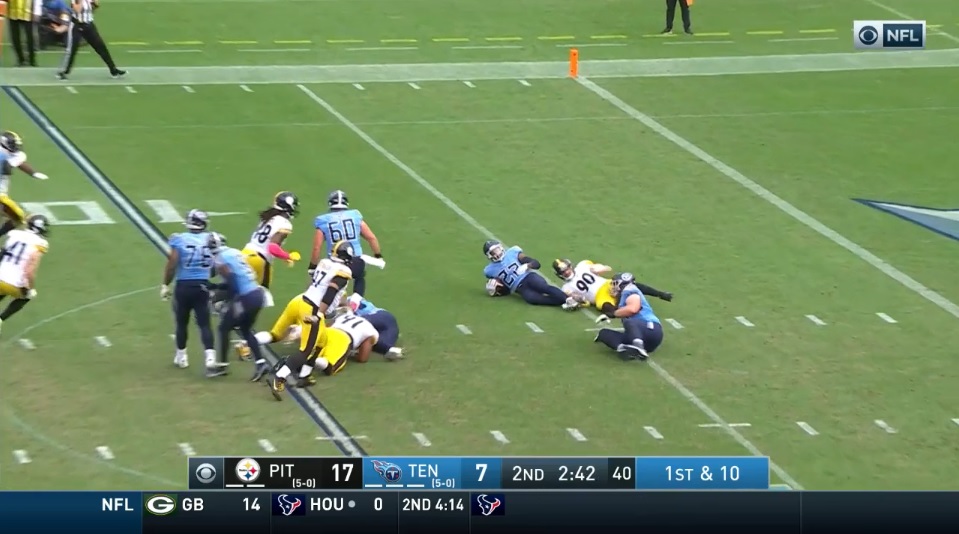 TJ Watt was as instrumental as anyone in containing Derrick Henry in Sunday’s win over the Titans. Watt finished the day with five tackles (four solo) and a whopping three tackles for loss as Henry was largely bottled up to 75 yards and under four yards per carry. Older brother JJ Watt should get an assist for at least one of TJ’s TFL’s. In a great nugget in Peter King’s FMIA for Pro Football Talk, TJ explained how he watched JJ – who played Tennessee in Week 6 – to prepare for the game.

“On first down, Ryan Tannehill handed to Derrick Henry for a common-sense sweep around right end. Get out of the hole, see if you can get some momentum and put up some points before halftime. Offensive coordinator Arthur Smith put the ball in his playmaker’s hands. Watt, at left outside linebacker, saw the play. He knew precisely what was coming.

He knew what was coming because of his big brother, Houston defensive lineman J.J. Watt.

Sure enough, they’re almost identical. Three clips below, two from JJ and the third from Watt yesterday. TJ had the same inside swim move on RT Dennis Kelly to drop Henry at or behind the line of scrimmage. Check it out.

JJ Watt’s Texans didn’t have the success the Steelers did yesterday. Against Houston, Henry went off for 212 yards and over nine yards per carry. But that’s a product of team run defense and there’s no question the Steelers have a better unit overall.

“I watched their steps, their rush, TV copy, coaches film,” Watt told King. “Coach Tomlin says, ‘We don’t care where good ideas come from.’ So this week, I’m watching my brother rush Derrick Henry, and I get some ideas.”

What Watt gleaned from his older brother speaks to his work ethic and dedication to film study. It’s been a running theme of the season. Watt’s openly discussed watching TV tape to hear the QB’s cadence and snap count cues. It’s worked and one reason why his get-off is so remarkable. And now he’s using any avenue possible, including big brother, to gain an advantage on Sundays. Really impressive stuff and a great piece of information from King’s column.