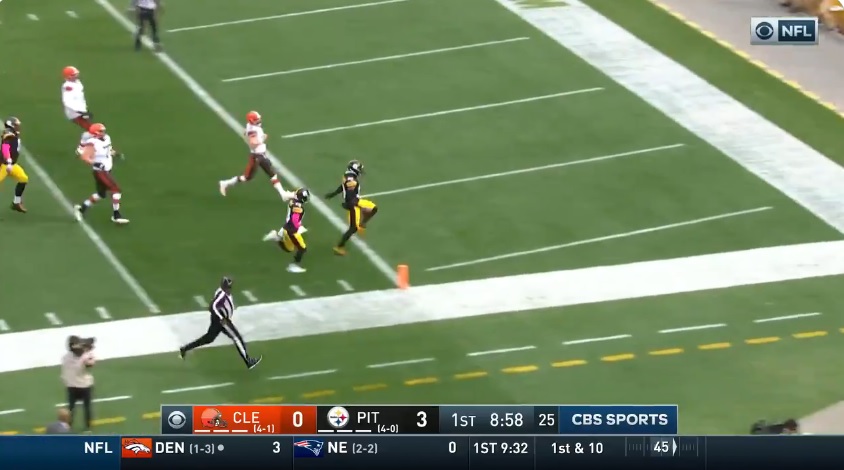 It was a long day for the Browns offensive line, who gave up four sacks, in the Steelers big time win over the Cleveland Browns to move to 5-0 for the first time since 1978.

The black and gold offense had a solid start to their first possession, moving the ball 58 yards over 11 plays. However, they would not find the endzone, and cap their first drive off with a 35 yard Chris Boswell field goal. The Steelers lead 3-0 at that point.

On the Browns ensuing possession, Baker Mayfield would be intercepted by Minkah Fitzpatrick, who would return it 33 yards for a touchdown. The Steelers jumped out to an early 10-0 lead.

Over the next five possessions, neither offense could move the ball effectively, each resulting in punts.

After two straight possessions ending in punts, the Steelers offense came alive early in the second quarter. Completions to Eric Ebron and James Washington helped move the offense in position to take a deep shot. Big Ben would hook up with his new favorite deep target, Chase Claypool, for a 33 yard gain, that set them up for first and goal. James Conner would punch it in from a few yards out to put the Steelers ahead 17-0 with a little over 10 minutes left in the second quarter.

On the next Browns possession, Mayfield is intercepted again, this time by Cameron Sutton, setting the Steelers up at midfield midway through the second quarter.

Big Ben would find James Washington for a 28 yard touchdown just a few plays later on a double move. The Steelers offense continued to hit their stride in the second quarter.

However, the Steelers shut out would end in the waning moments of the second quarter. The Browns and Mayfield would move the ball down the field, in nine plays, milking over four minutes of time on the clock. Mayfield would find Rashard Higgins wide open for a 13 yard touchdown, to cut the Steelers lead to 24-7 heading into halftime.

The second half began poorly for the Browns. After a Bud Dupree sack, the Browns were put behind the sticks and forced to punt after going three and out.

The Steelers were derailed by a holding and offensive pass interference penalty on their next possession, leading to a punt.

The Browns attempted to convert a fourth down and one on the next possession, but were stuffed by the Steelers defense, led by Cam Heyward. The Steelers would take over on the Browns 29 yard line.

After runs by Benny Snell and James Conner, the Steelers moved the ball to the two yard line. Chase Claypool would score on a fly sweep, extending the Steelers lead to 31-7 just before the start of the fourth quarter.

In the fourth quarter, the game continued to trend in the Steelers favor. Benny Snell would add another touchdown with eight minutes left to put the Steelers up 38-7.

The Steelers would go on to win, 38-7. There is concern for the defense though, as starting linebacker Devin Bush left the game with a knee injury. Big Ben threw for 162 yards and a touchdown, James Conner ran for over 100 yards. Bud Dupree led the way defensively with two sacks. The defense only allowed 75 yards rushing to the number one rushing offense in the league.

The Steelers will face the Tennessee Titans next Sunday, in a game that had to be rescheduled due several positive tests by Titans staff and players. The game will kickoff at 1 pm in Nashville.