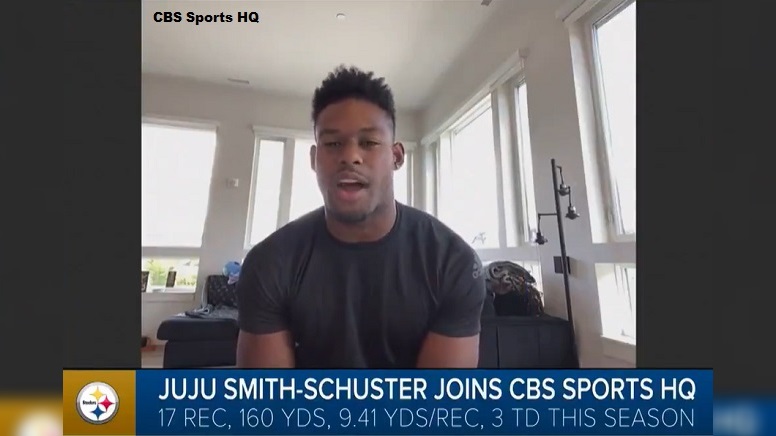 Pittsburgh Steelers wide receiver JuJu Smith-Schuster has a little bit more than five months left before he can become an unrestricted free agent. Even so, that hasn’t stopped people from asking him about what he thinks the future holds for him past the 2020 season, the final year of his rookie contract. On Saturday, Smith-Schuster was a guest on CBS Sports HQ and during his interview there was a rapid-fire question and answer session and during it he was asked to comment on long-term extension or free agency.

“Oh, long term extension,” Smith-Schuster said. “I, honestly, with the Steelers, man, I love it here. I had spoken to some other of my other teammates and I don’t know, man, I just love the Steelers, I just love being here. I’ve already made a name for myself and pretty much, you know, this team is just, you know, we got it, we got something going. So, I’d rather stay here for a very long time.”

Smith-Schuster’s response, just like the one he gave a few days ago to a similar question during a podcast interview, was not a bit surprising. After all. why wouldn’t Smith-Schuster want to stay in Pittsburgh? He’s a great kid and an incredibly talented one at that. The Steelers also would probably like Smith-Schuster to stay around past this season if something can be worked out.

The biggest obstacle related to Smith-Schuster potentially staying with the Steelers past the 2020 season is obviously related to the associated cost in concert with the team’s salary cap situation, which doesn’t look great right now with a little more than five months left before they’ll need to be compliant with the 2021 league-wide number.

We’re going to be discussing Smith-Schuster’s future past the 2020 season quite a bit in the next five and a half months as the former second-round draft pick out of USC is bound to be asked more questions about it as well. His answer isn’t likely to change much, if any. The Steelers 2021 cap situation, however, won’t either, baring 2020 revenues coming in much, much higher than expected.

While many wont choose to accept it, Smith-Schuster’s curer market value is right around $16 million per season, which is just slightly more than what 2021 franchise tag amount for wide receivers is expected to be based on an $175 million league-wide cap number.

Can the Steelers get themselves into a position where they can use the franchise tag on Smith-Schuster come late February or early March? While not an impossible task, it’s a very daunting one and especially if the 2021 cap number comes in at less than 2020’s number, which was $198.2 million. Remember, the greater the 2021 cap number is over $175 million, the greater the franchise tag amount for wide receivers will be.

The best contract comparative that we have for Smith-Schuster right now is the one that Los Angeles Rams wide receiver Cooper Kupp signed several weeks ago. That three-year, $47.25 million new money extension included a $6 million signing bonus. The total guaranteed in that deal was reportedly $20.633 million.

What does the outline of Kupp’s deal mean for a similar deal for Smith-Schuster from the Steelers prior to him getting franchise tagged by the team in the early spring? Honestly, roughly $20 million in 2021 total earnings is what it likely would take to get Smith-Schuster to sign a long-term deal next spring and prior to placing the franchise tag on him. For example, a $17 million signing bonus and a $3 million base salary. That rough spitball estimate would result in a 2021 cap charge of $6.4 million for Smith-Schuster, which would be $9 million or so less than the currently projected franchise tag amount on him.

Obviously, Smith-Schuster’s market value could increase or decrease as the 2020 season rolls on. He is off to a nice start, however, and barring him missing time with injuries, his 2021 market value could wind up being closer to $18 million.

Once again. Smith-Schuster’s market value isn’t the biggest issue when it comes to him staying in Pittsburgh past the 2020 season. The issue also obviously isn’t that he doesn’t want to stay or that the team won’t want him back. The issue is the 2021 salary cap situation the Steelers potentially face.

With 13 Steelers regular season games remaining to be played in the 2020 season, the best way to close out this post is to indicate that this topic is sure to be continued in future posts.