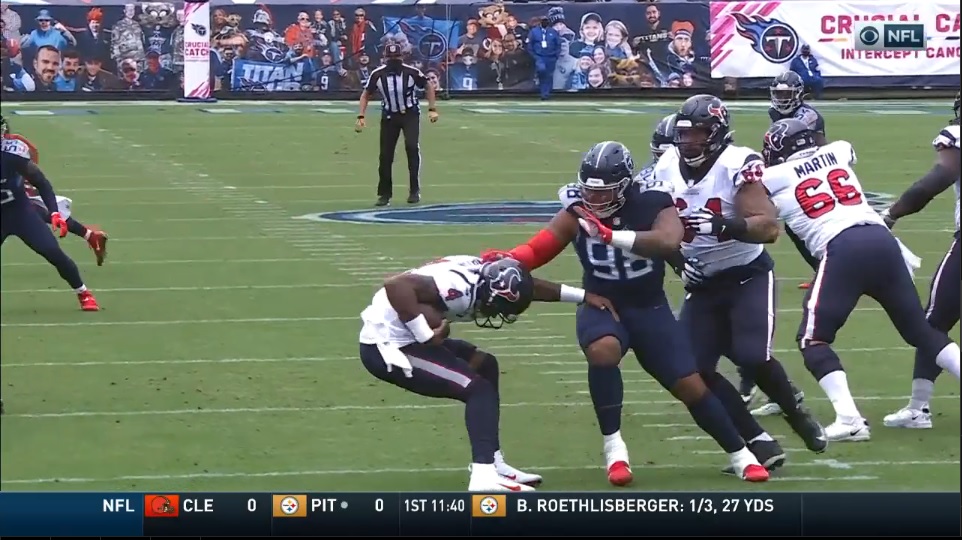 The Titans’ run defense statistically hasn’t been good. They’re allowing an ugly 5.1 YPC, 29th in football. They’re also giving up 137 yards per game on the ground, one of the lower marks in football. Tennessee also has allowed 21 runs of 10+ yard runs. That’s tied for 24th most. They have an old-school mentality of playing a more traditional, 2-gap front, letting their talented linebackers like Rashaan Evans make plays behind them. Or the d-line can do the job themselves. Example of the latter.

But they can penetrate and one-gap too, especially when against zone looks. They tend to spike and scrape too, using their athletic linebackers like Jadeveon Clowney and Harold Landry to disrupt in the backfield.

Tom will touch on it more in his individual report but I’ve been really impressed by LB Rashaan Evans, former first round pick out of Alabama and someone the Steelers were reportedly going to take before Tennessee nabbed him. Watch him stuff David Johnson at the goal line in last week’s win over the Texans.

Some other defensive stats. They’re middle in the pack in PPG allowed, giving up 25.2. But there’s been some wild swings there. In two games, they’ve given up 14 and 16 points. In the three other games, they’ve allowed 30+ including 36 to Houston last week. One reason for that? They’ve been the league’s worst on 3rd down and red zone. 57.8% on third down and 87.5% in the red zone. Really ugly numbers.

It’s been middling to below average and the pressure hasn’t been much better either. They have just seven sacks in five games. That’s tied for 28th in football. Only Jeffrey Simmons has more than one sack and he has only two. Two of those sacks have come from DBs so though the team’s blitz rate isn’t terribly high, just 28.5%, they are getting home. Their overall pressure rate is just 20.8%, the bottom half of football.

Some other pass defense stats. They’ve averaging in YPA at 7.5 but have given up their fair share of TDs through the air. 13 of them, tied for 26th worst in the NFL. They have six INTs, tied for 8th most in football, and as I pointed out in the offensive report, their takeaway-happy defense has tied them for the best TO differential in football at +6.

CB Malcolm Butler is third on the team with 33 tackles. Not too often you see a corner make that many tackles. Not sure if that’s a good thing either. But he has the 6th most tackles by any cornerback in football so not someone afraid to stick his face in the fan.

Ok, let’s talk about their coverage. I don’t have hard data but based on the eye test, I haven’t seen a defense play as much zone coverage this year than the Titans. Partially influenced by facing some mobile QBs like Josh Allen and Deshaun Watson but they’re playing a ton of spot drop zone. Cover 2 and Cover 3 the most popular concepts. They will drop eight into coverage to make their zone spot drops tighter. Against a pretty immobile QB like Ben Roethlisberger in terms of him running pas the LOS, I expect them to drop eight a fair amount this weekend.

Against 2×2 sets, you mostly get C3. You can get rotation out of that too. Show two high pre-snap and then spin down to single high.

And they can invert their C2 too. Like Minkah Fitzpatrick, they’ll spin star safety Kevin Byard down to rob underneath routes. Byard and Kenny Vacarro are an excellent pairing.

They don’t blitz a lot but they’ll bring pressure all over the field. From field side nickel corners to boundary outside corners. Mike Vrabel has a small numbers of blitzes but that can surprise opposing offenses.

The Steelers hit the road for a matchup of unbeaten teams when they meet Tennessee this week. While the Titans offense is clicking ranking number 2 in scoring and yards while the defense is not as formidable.  They are 15th in point’s allowed and 26th in yards allowed playing a bend but don’t break style and will use multiple fronts and alignments.

Up front on the inside they’re led by Jeffrey Simmons. He was injured his final year of college and he’s really starting to put it together now. He’ll play from the 0-3T and is a great combination of agility and strength with very good use of hands to shed versus the run or attack as a pass rusher. Next to him is DaQuan Jones who is solid against double team blocks, shows good chase against the run and will use a club and lateral agility to get to the QB. He has a foot injury and may not play this week. The weak side DE is Jadeveon Clowney who’ll work mostly from the 5 tech to the wide 9. He has the strength to set the edge and his best pass rush comes from his agility rushing outside and then jumping to the inside. On the strong side is Harold Landry who plays the 7-9 tech on even fronts and will play the SAM linebacker as well. He has a high motor, always chasing to the ball, and uses speed as well as improving power rushes. He’s adequate in coverage so the Steelers could throw his way when he at linebacker.

Here is Simmons (98) making a big play in the red zone.  He’s the 3 tech on the right side and at the snap will drive the left guard into the backfield that also takes out the pulling left tackle. He then chases to the outside to get in on the tackle.

The backups up front include Jack Crawford. He will play inside and as the strong side DE has the strength to play the double team and stack and shed in a two gap scheme. Rookie Larrell Murchison plays the 1/3 tech has a high motor rushing the QB and is a strong tackler. Isaiah Mack is big bodied DT filling running lanes and used as a penetrator on stunts to open up lanes for the edge rushers.

At linebacker they have Jayon Brown who plays the MACK/WILL depending on scheme. He’s very athletic, takes good angles to the ball, processes screens well but will try to duck under blocks rather than take them on. Rashaan Evans plays the MIKE/BUCK position he flows to the ball well particularly to the outside and is a strong tackler but reacts to runs right at him a little slow. Kamalei Correa will play the WILL/SAM is also very athletic and probably their best coverage linebacker.

Here is Evans (54) filling the gap in the red zone. He hesitates for a split second but still makes the stop short of the goal line.

Vic Beasley will come in as a situational pass rusher and uses good leverage on power rushes and is willing to set the edge against the run but rarely tackles.  He has 1 tackle assist this year on 57 snaps. David Long backs up on the inside and is very athletic and can be over aggressive to the ball. Derick Roberson was brought in for his first snaps on the edge last week and showed solid quickness, used a long arm rushing the passer and seemed better going forward rather than laterally.

They have a solid trio of safeties with the starters rarely leaving the game.  Kenny Vaccaro is the strong safety and will be used on the backend in various coverages and also in Man coverage on the RB in when the defense is in dime. He flies all over the field and attacks the run. Kevin Byard is the free safety and is often used in the box or in robber coverage. He fills gaps versus the run but his angles are only adequate on the outside. He often covers the TE in sub packages and likes to play physical coverage. Amani Hooker is the third safety and he is brought in to be the deep safety in dime coverage or to be used in the slot.

Here’s an example of Vaccaro (24) supporting the run. He starts out 8 yards off the LOS, reads the blocking and fills the gap to make the stop for no gain.

The Titans lost Adoree Jackson earlier in the year to a knee injury and is designated to return but not quite ready yet. The corners include Malcolm Butler who is usually on the right side with veteran Johnathan Joseph on the other side. Butler is a very savvy defender, situationally aware and has very good ball skills especially in Man coverage. He’s a reluctant tackler but will get physical when needed. Joseph is in his 15th season supports the run well and is better in off coverage breaking on the ball. Kristian Fulton is the number three DB plays in the slot and will be used to blitz.  He will be the DB they will likely attack. The Titans have also used rookie Chris Jackson who has some versatility playing safety in college and Tye Smith who is a Zone corner who can play with physicality in coverage and against the run.

Here is Butler (21) versus the Texans. He shows patience at the LOS mirroring the WR uses his hands to deflect those of the receiver and is in good position to read the WR eyes to break up the underthrown pass.