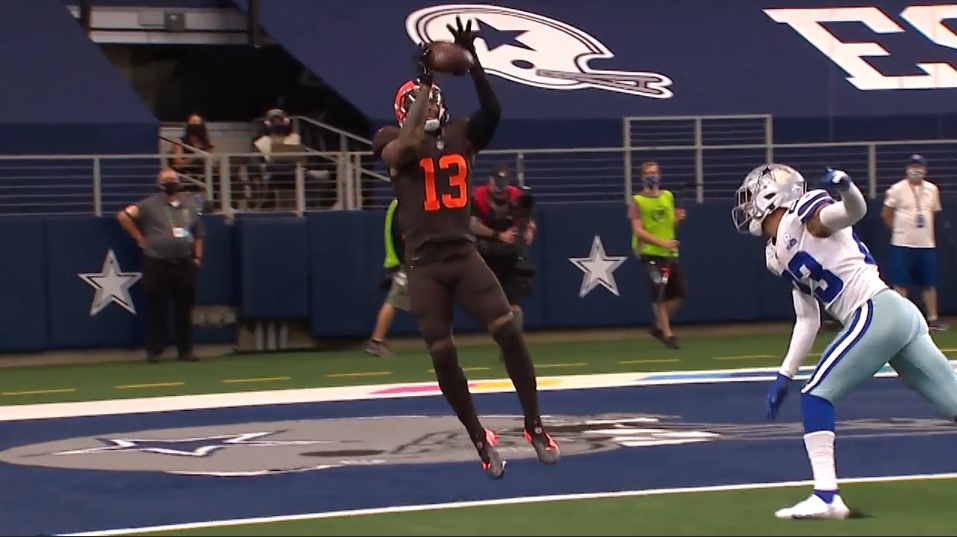 Here’s our breakdown of the Cleveland Browns’ offense.

As you may know by now, the Browns enter Week 5 with the league’s best rushing attack. What they won’t have is Nick Chubb, suffering a freak knee injury in Week 4’s win over the Dallas Cowboys. Still, their rushing attack is potent with Kareem Hunt, the emergence of D’Ernest Johnson, a good offensive line, and highly touted o-line coach in Bill Callahan. Callahan is having a similar impact on the Browns’ run game as Mike Munchak had for the Steelers’ pass pro.

Cleveland is likely to be without guard Wyatt Teller, who has been a fantastic run blocker, due to a calf injury. Ex-Steeler Chris Hubbard will fill in at RG. Read more about them in Josh’s section of the report.

To the numbers. They’re first in rush yards per game at 188.4 and are second in YPC at 5.5, narrowly behind the Baltimore Ravens. Unsurprisingly, they’re 1st in runs of 10+ yards (33) and runs of 20+ (12). Kareem Hunt will be their lead back, averaging five yards per carry. Johnson has an even better YPC at exactly 6.0, though he has only 22 carries on the season.

Schematically, they’re a heavy zone team, capable of running inside or outside zone. Get the line on a singular track and let the back pick his lane. They can run this out of one back or two back, the latter with veteran FB Andy Janovich. An example.

And they’ll add some interesting wrinkles to their run game too. Especially in short-yardage situations. Pair of examples. 3rd and 1 speed option and a 1st and goal fullback counter. Stuff you’re more likely to see on Friday night, not Sunday afternoon.

Odell Beckham Jr. has three rushes and a touchdown, a 50 yard scamper to seal the win over the Cowboys. Some other offensive stats. They have the fourth highest scoring offense at 31.2 points per game. Aided by a top five red zone unit, finding the end zone 73.7% of the time. They’re average on 3rd down, ranking 14th at 45.2%.

Led by Baker Mayfield who despite some sore ribs, should play Sunday. Mayfield was played good, not great. Nine touchdowns to four INTs. His YPA is very low at 6.4 per attempt. That’s tied for 26th in football right around Joe Burrow, Dwayne Haskins, and Mitch Trubisky. Not the best company to keep. Despite the low YPA, his completion percentage is also low, dipping near 61%. The o-line has kept him upright – a great run game and having leads helps with this stat too – and Mayfield has been sacked only seven times this season. Additions of Jack Conklin at RT and drafting Jedrick Wills at LT have really gone a long way.

Watch out for those tricky, tricky Cleveland Browns too. OBJ and Landry have each thrown a pass this year. Both completed and Landry threw a dime to OBJ for a long TD. It’s hard to put a theme on when they’re going to use those plays. OBJ’s pass came out of the two minute warning in the first half at their own 45. Landry’s came on 1st and 10 on the Browns’ first drive on the Cowboys’ 37. So just watch out for it coming out of a timeout/two minute warning or opening drive script.

On the receiving end of things, Beckham Jr. leads the team in targets but he and Landry are tied with 21 receptions. TE Austin Hooper inked a big deal in the offseason and has gotten involved in the offense the past two weeks, catching five balls in each game. RB Kareem Hunt is tied for the team lead with three receiving scores.

Speaking of Hunt, they love to get him involved in the route tree immediately. Not a lot of slower, check releases. A fast three to the two receiver side, creating three-level concepts like Sail.

And as we wrote yesterday, the Browns love playaction. Most teams will roll QBs to their throwing hand, so rolling right. Few teams roll left as much as Cleveland uses Mayfield, who has a strong arm and the ability to throw cross-body and off-platform. Sometimes they’ll run an over route to the left or mix it up with Y leak, the TE sneaking out and getting wide open if the defense loses sight of him. Dallas covered it well here.

Alert for playaction when the ball is on the right hash. Good chance Mayfield is booting to the left (the field side).

Heading into the Week 6 matchup at Heinz Field between the two AFC North foes, tensions are high, as is the anticipation of the matchup between two teams vying not only for the AFC North title in 2020 – but bragging rights in the AFC.

This isn’t your daddy’s Browns.

With new head coach Kevin Stefanski calling the shots, the Browns have become an efficient offense, going ground and pound early and often with some play-action mixed in, giving quarterback Baker Mayfield some easy throws to hit.

While Mayfield isn’t putting up huge numbers this year, he’s been extremely efficient this season, getting the ball to guys like Odell Beckham Jr., Jarvis Landry and Austin Hooper.

The Browns love play-action under Stefanski, so don’t be surprised to see it a ton of Sunday.

Usually, when Mayfield is utilizing play action, he’s looking for Landry, who can make some of the difficult catches downfield. He took a real shot here to the ribs, but this throw is only made because Mayfield has the arm strength to throw back across the field.

There’s very few throws Mayfield can’t make. He’s not going to sling the football around the field in this offense, but he be efficient and distribute the ball to his playmakers, allowing them to make plays.

One thing I’ve noticed with Mayfield this year is that he’s starting to realize when to protect his receivers and throw them into safe areas of the field.

He could have continued to lead Landry to the sidelines here, but that would have opened him up to massive shot for the second time early in the game. Instead, Mayfield throws it back shoulder so Landry has to adjust and settle, keeping him protected.

We’ve known Mayfield could throw on the move since coming out of Oklahoma a few years ago, but this might be the best throw I’ve seen him make on the move.

Again, play-action here for Mayfield, getting him out on the perimeter with two options to throw to.

Look at arm strength and accuracy here to rookie tight end Harrison Bryant, fitting this football in a tight window through Jaylon Smith’s arms for the 14-yard gain.

When he makes throws like this, he’s tough to defend as a quarterback.

While Mayfield is playing well overall early in the season, make no mistake about it: this is a run-first team.

Losing Nick Chubb for at least six weeks would hurt almost every other team, but not this version of the Browns. Having guys like Kareem Hunt, D’Ernest Johnson and Dontrell Hilliard as depth is a real luxury.

Hunt is likely a starting running back elsewhere, but having him back up Chubb allows the Browns to remain committed to the ground game. He’s a high-level dual threat back.

The one guy that has caught my eye though is former AAF star D’Ernest Johnson, who burst onto the scene with 98 yards in the win over the Cowboys.

He runs hard, is decisive and is light on his feet.

What I like about Johnson is that he’s not like most running backs in the sense that he just crashes into the line. He has good vision, is patient and can pick his way through defenses.

The key to this Browns roster is its offensive line.

Here’s how I expect them to line up on Sunday, left to right:

The key piece so far up front has been right guard Wyatt Teller. He’s become a road grader in the run game, often pulling out in front of guys like Chubb, Hunt and Johnson on long runs.

Teller hasn’t practiced this week due to a calf injury, so if he can’t go it will hinder Cleveland’s style of play. Expect former Steeler Chris Hubbard to start in his place, should he be unable to go.

Special teams is interesting for the Browns. I’m a big, big believer in punter Jamie Gillan, who has a monster leg, but the kicking game and return game concerns me.

Cody Parkey – he of double doink fame in Chicago – hasn’t missed a kick this year, but a lot of his kicks have been adventures.

The Browns are deploying rookie Donovan Peoples-Jones as the punt and kick returner. He’s been solid for now, but he had a gaffe on a kick return against the Cowboys where he didn’t field the kick and stood around waiting for the ball to roll into the end zone.

If the Steelers have an advantage on Sunday, it’ll be on special teams.