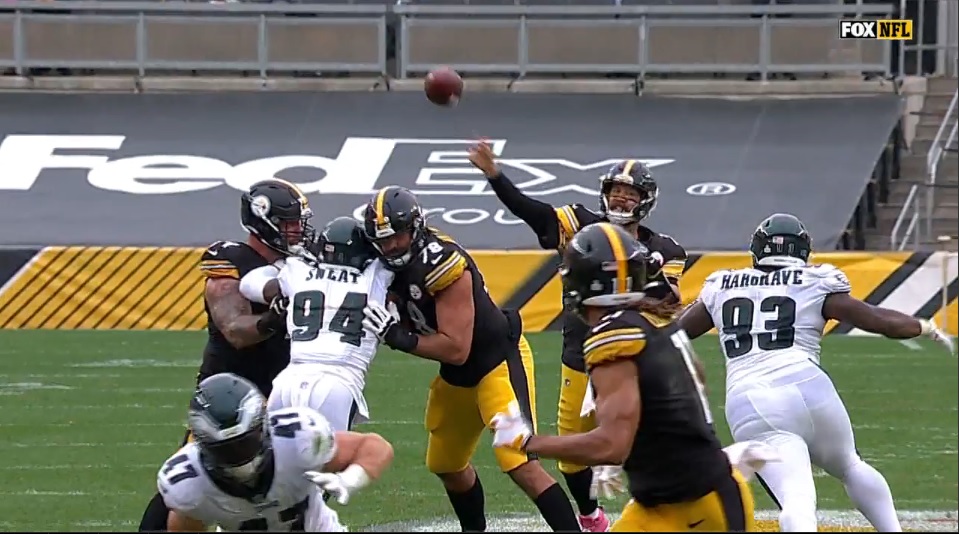 Chase Claypool is everything you want in a receiver, Big. Fast. Strong. And whip smart. Talking to the media after Sunday’s 38-29 win over the Eagles, Ben Roethlisberger praised Claypool’s complete body of work. And one heck of a performance.

“He’s talented,” Roethlisberger said. “He has got some God given abilities that not many people in this world have. He’s big, fast and strong, and he’s very, very smart. And so we’re able to do those things, like move him around and do some things with him.”

Claypool became the first Steelers’ rookie in team history with four touchdowns in a game. Just the third ever to do in a Pittsburgh uniform. That included catching the game-sealing 35 yard score to hold off a furious Eagles’ comeback. Roethlisberger broke down that play, saying he changed the call at the last moment.

“That’s a new formation we put in this week with Ray-Ray in the game. Taking the back out and we went to it a couple of times today. And so we expected them on that particular play to kind of go with an all-out blitz. So we had a play called to get the ball out quick and hopefully try and beat the blitz. And, they sat back in a Cover 2 zone and just, wasn’t what we expected. So I saw that and I changed the play. I think the coolest part about the whole thing is we’ve never run the play I called with that formation or that group on the field. So Chase has never been in that spot. Ray-Ray’s never been in that spot. The other three kind of know what they’re supposed to do, but we changed the play. And I can’t say enough about Chase getting down in the middle of the field and making that play for us.”

He finished the day with seven catches for 110 yards and three touchdowns with three carries for six yards and another score. A breakout game if there ever was one. Despite the difficulty of this rookie season for this entire class, Claypool is playing like a cool, calm, collected veteran.

Diontae Johnson is likely to return next week, muddying up the receiver room more than it’s been the last two weeks, but Claypool has earned a serious role in this offense. He’ll likely keep chipping away at James Washington’s snaps and target share.