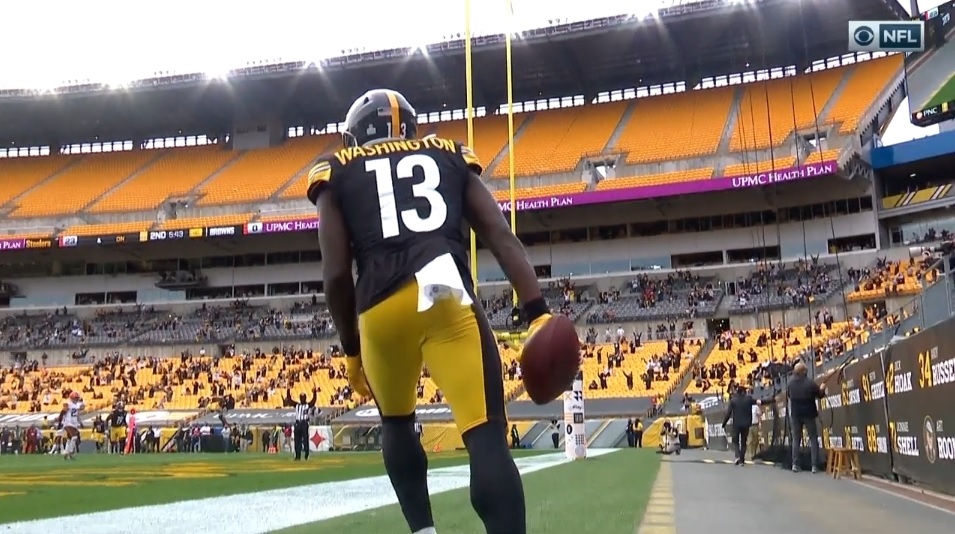 Josh Dobbs hasn’t played a snap for the Steelers, he hasn’t even dressed for a game, but he’s still making an impact on the offense. Ben Roethlisberger spoke with the media after the game and credited Dobbs for suggesting James Washington’s double-move that led to an easy, 28 yard score.

“You know, James caught the long one,” Roethlisberger said via the team. “Which I gotta give credit Josh Dobbs on the sideline. We were talking about plays and he had mentioned, calling a play that we basically scored a touchdown on. So I gotta give Dobbs credit for that talk on the sideline.”

Cleveland played plenty of tight, press coverage early in the game. Roethlisberger threw incomplete on his first three RPOs. One was nearly intercepted and another probably would have been had the pass not been batted down at the line of scrimmage. So Dobbs and the playcalling smartly adjusted to playing off that aggressiveness. Influencing the Browns by making Washington’s route look like an out route and then stemming vertical and getting free. Roethlisberger’s pump fake sold the deal. Take a look.

Coming out of the draft, Dobbs had always been credited as an incredibly smart player on and off the field, famously discussed for his aerospace engineering degree and work with NASA. Sitting on the sidelines offers a different perspective Roethlisberger might not have on the field in the middle of it all.

It’s fair to say Roethlisberger is even mentally sharper this season because of the time he missed, a silver lining to an ugly 2019 season marred by season-ending elbow surgery. Tomlin made that point speaking with Bob Pompeani on The Mike Tomlin Show which aired yesterday.

“There’s no question he’s as mentally sharp as he’s ever been,” Tomlin said about Roethlisberger. It’s reasonable to expect that a guy that has the level of playing experience that he has that had an opportunity to maybe change his perspective a year ago and to watch. As miserable as that experience probably was from for him, I’m sure it provided some perspective for him that he’s utilizing back in his more comfortable and familiar role.”

Dobbs did the same on the sidelines Sunday. Credit Roethlisberger with the throw, Washington with the catch, and Dobbs the assist. When Dobbs’ football career ends, if he wants to, he’s going to make one heck of a coach.