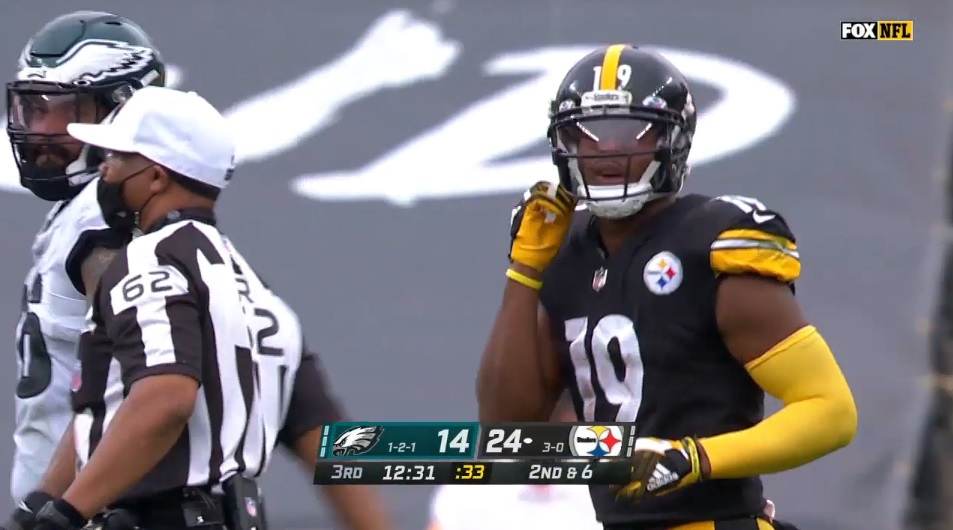 This Pittsburgh Steelers’ offense is filled to the brim with weapons. In most respects, that’s a good thing. The only potential downside are the number of mouths to feed. Every receiver wants the football. And as we’ve seen in years past, not getting those guys involved could lead to…issues. Not with this group. Ben Roethlisberger made it a point to credit the receiver group for how selfless they’ve been.

“When I came into the locker room after this last week, I wasn’t sure what the demeanor was going to be from the other receivers, to be perfectly honest,” Roethlisberger told the media in a Wednesday Q&A session. “Because obviously Chase [Claypool] had an amazing day. I looked over at JuJu [Smith-Schuster] to kind of see his reaction because he is our No. 1 receiver. I looked over at him, and he had the biggest smile on his face. And it’s not because Chase was right there with him. Chase wasn’t even next to him. He had the biggest smile. He was having fun with other guys.”

Chase Claypool stole the show with a record-setting four touchdown performance, the first rookie in team history to accomplish that feat. JuJu Smith-Schuster was on the other end of the spectrum with a quiet four catch, 28 yard game with no significant plays among them. But Smith-Schuster was as happy as anyone for Claypool and the offense’s success, breaking the 30 point barrier for the first time in 24 games. Something that really resonated with Roethlisberger.

“I just can’t say enough about [JuJu] and what that meant to me and what that meant to other guys and how proud we are of him that he truly was happy for Chase. He was happy that we won the game. Did he have huge stats? No. But we won the game and that’s all that matters. I think for a No. 1 receiver to feel that way in the locker room, I told my wife about it, I told my closest friends about it.”

As great of a receiver as Antonio Brown was, the team heard about it when he wasn’t getting involved. Gameplans had to get him the ball early and often. And when frustration boiled over, it became obvious, sometimes ending in a Gatorade jug taking the worst of it. That led to more drama, storylines, questions for teammates and coaches to be pestered with during the week. Things we’re not seeing now. Claypool himself credited Smith-Schuster for the mentorship and advice he’s given on and off the field

Of course, winning cures all ills. It’s easy to be happy when you’re undefeated. The true test of the team is when there are losses, adversity, and hardship, but nothing Smith-Schuster has done in the NFL suggests he’ll be a headache. Few players embody the “take the blame, deflect the credit” like he has.

“That just made me really proud and happy that we have selfless guys on this team that are more about the win than they are trying to get their stats. I can’t say enough about JuJu and what that meant after the game.”