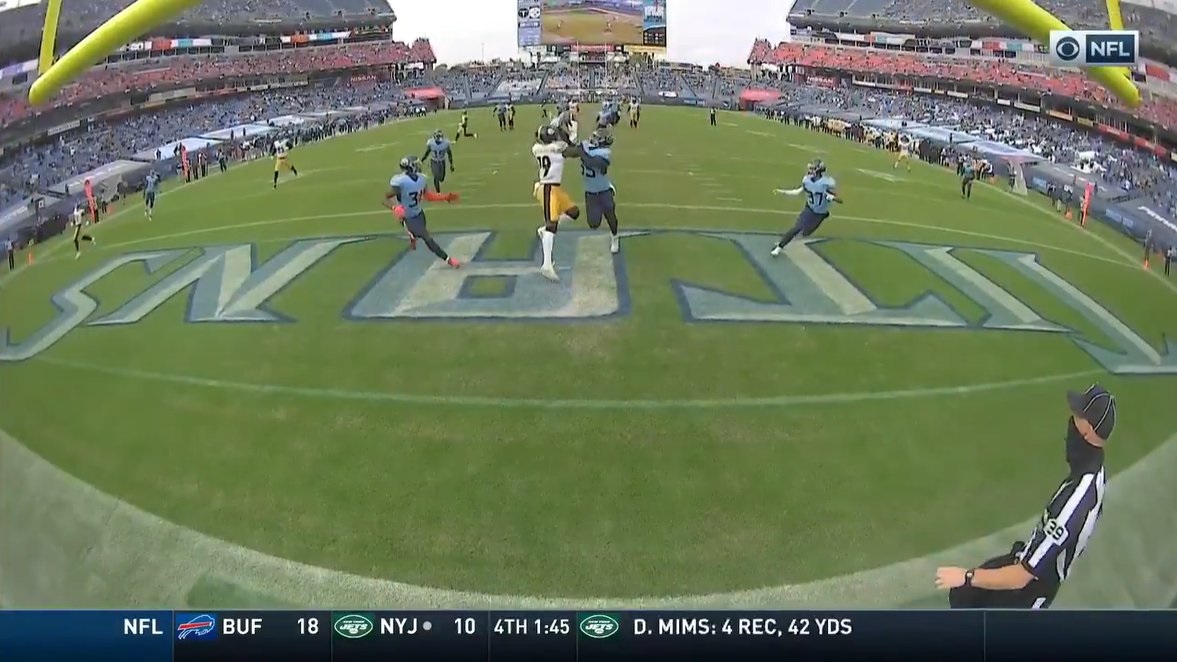 Sunday’s mythological tilt between the Steelers and the Titans – two of the final three unbeaten teams in the NFL — had it all: a first-half beatdown an a near epic second-half comeback before the Steelers somehow held on to win the battle of the unbeaten 27-24, thanks to a missed field goal by veteran Titans kicker Stephen Gostkowski.

Pittsburgh looked so dominant in the first half on Sunday, rolling to a 27-7 lead at the half. Things fell apart in the second half though as Ben Roethlisberger turned the ball over twice, including a terrible interception in the end zone targeting JuJu Smith-Schuster in triple coverage. With the Steelers’ offense stalling out, the Steelers’ defense looked worn down as Derrick Henry and the Titans got going.

An interception to end the first half on a heave to the end zone seemed to get Roethlisberger out of rhythm, as the veteran signal caller came out in the second half and was mostly a mess, getting a couple of passes batted at the line – one of which was picked off – and forced a throw into the end zone to Smith-Schuster with the Steelers in field goal range.

After being so conservative early in the year, it felt like Roethlisberger forced a number of throws on Sunday. Let’s hope he cleans it up next week and returns to his first-half style, because that was lethal.

James Conner continues to have a really strong start to the 2020 season. On Sunday, Conner really took over the game for stretches, running hard against a physical Titans’ front, having a lot of success on counters, powers and draws.

He did drop a would-be touchdown in the red zone and fumbled the football on an early carry. However, he was really solid in space and racked up yards. I am excited to see how his successful run rate is this week, one week after putting up a 70% success rate.

Behind Conner, I loved seeing Snell continue to get goal line work, walking on over the left side thanks to two great blocks from Henry Mondeaux and Jerald Hawkins.

I am not a fan of getting Jaylen Samuels touches at all. Why not give Anthony McFarland touches, especially on jet sweeps. It makes no sense. Samuels also had a killer offensive pass interference call that stalled a drive. I’d like to see him not see the field unless there’s an injury. He’s simply not good enough.

I thought Smith-Schuster would get a ton of work on Sunday and he delivered. Smith-Schuster was targeted 14 times on Sunday, hauling in nine passes for 85 yards to lead the Steelers. He made some tough catches over the middle and did a great job moving the chains throughout the game.

Johnson matched Smith-Schuster with nine catches, finishing with 81 yards and two scores. It feels like it could have been a bigger day for Johnson, who dropped at least two touchdowns, including a free-play shot late in the first half down the right sideline in the end zone.

He’s so talented as a route runner and is electrifying with the football in his hands, but he needs to clean up the drops issues.

Chase Claypool and James Washington were negated on Sunday, drawing just two targets. That’s bound to happen. Claypool looked to have converted a key third down late in the game, but Samuels’ pass interference call wiped out the catch.

I like the mix Ray-Ray McCloud brings to the table as the fifth option. He finished with two catches for 12 yards, giving the Titans another weapon to think about.

I was really, really pleased with the tight ends and their usage on Sunday.

Eric Ebron continues to be a safety outlet for Roethlisberger, finishing with six catches for 50 yards. He was targeted three times in the red zone, which helped free up room for others.

Vance McDonald finished with two catches for 14 yards, but his real impact came as a run blocker, serving as the second lead blocker often on powers and counters, clearing lanes for Conner.

No sacks, just three quarterback hits and a consistent run game all day long has me pleased with the offensive line.

Chukwuma Okorafor had a rough start to the game on the first drive with a holding and a facemask call that nearly stalled the drive, but after that he rebounded to hang tough against Jadaveon Clowney on Sunday.

Jerald Hawkins came into the game for Okorafor due to injury and played well, from what I saw on TV tape. He had a key block earlier in the game as the extra tight end, springing Snell for the touchdown.

Overall, the numbers weren’t quite there, but I thought Cam Heyward, Stephon Tuitt and Tyson Alualu really got after Tennessee’s offensive line, helping shut down Derrick Henry and Tennessee’s smashmouth run game.

The trio drew blockers all game long, which helped free up Bud Dupree and TJ Watt on the edge, and allowed linebackers Robert Spillane and Vince Williams to roam freely and make stops against the run.

Coming into Sunday’s game, I had Williams circled as THE guy to be a major factor against the run. Williams lived up to it, finishing with a game-high 10 stops, including two tackles for a loss and a sack of Ryan Tannehill. Williams knifed through gaps in the Titans’ line and did a great job laying the lumber to Henry.

Speaking of laying the lumber, Spillane did an incredible job meeting Henry in the hole near the goalline, stopping the 250-pound back in his tracks. Hopefully the shoulder injury that came from it doesn’t linger long.

Outside, Dupree didn’t crack the stats sheet but he was a menace all game long, moving all over the field to give the Titans’ offense issues. Watt did a great job putting pressure on Tannehill throughout the game, finishing with a sack in the win.

Another game, another one I’m not too thrilled with the secondary overall.

I thought Cam Sutton and Terrell Edmunds were fantastic Sunday, taking away Jonnu Smith and Anthony Firkser throughout the game, but aside from those two it was a rough day for the secondary.

Minkah Fitzpatrick had an ugly rep on AJ Brown’s long touchdown, getting caught in between thinking Williams was going to tip the pass and going for the tackle. Then, he had a bad holding call in the end zone on Smith that extended Tennessee’s drive and led to a Henry touchdown plunge.

Steven Nelson and Joe Haden really struggled against play-action on Sunday, especially against mesh routes. They found themselves trailing often. Haden gave up a long completion down the right sideline to Brown on the final drive of the game after playing in the trail technique. Have to clean it up.

I’m really, really pleased with the special teams so far this season.

McCloud has been a godsend as a return. On Sunday, he ripped off a 57-yard punt return to set up a Steelers’ score.

Chris Boswell was super solid on Sunday, drilling both of his field goals and all three extra points, while old-but-new punter Jordan Berry really punted the football well, averaging 50 yards per punt on two kicks, pinning the Titans inside the 20 yard line on both punts.

Coverage units were very sound Sunday too. Boswell’s directional kickoff helped pin the Titans deep inside their own 10 yard line.