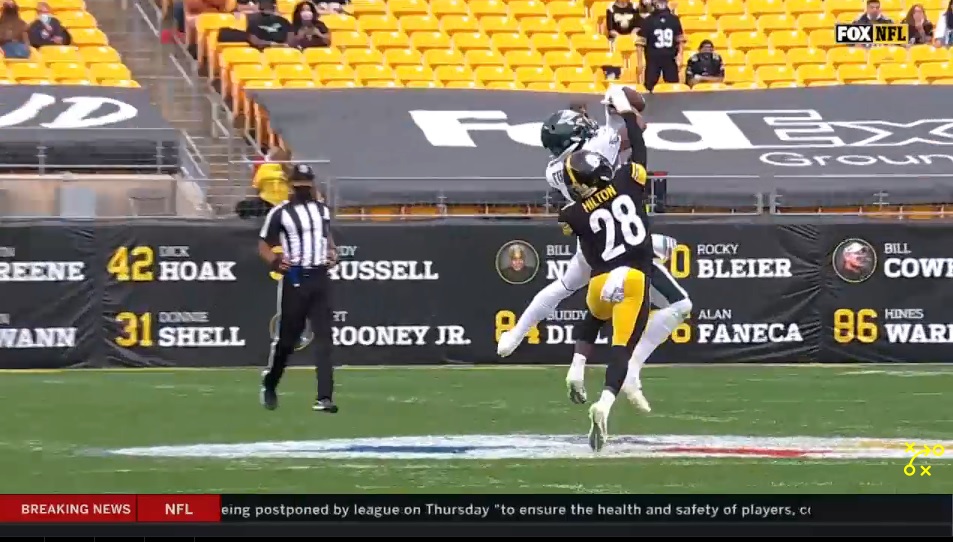 Steelers Nation might be griping about the the team’s secondary. Not Mike Tomlin. At least publicly, Tomlin hasn’t changed his tune about the talent and ability of the group. At his Tuesday press conference, Tomlin was asked to evaluate his defensive backs.

“I just attribute it to a four game sample size,” Tomlin said. “Keep watching. We’ll continue to write our story particularly as it pertains to comparing it to a 16 game body of work from a year ago, if you took a sample size of our body of work last year, at this time through four games, it was miserable, I think. And so we were very much in development and I like the overall trajectory of our group in the corners. And we’re just going to keep working.”

The unit didn’t have a great game against the Philadelphia Eagles, letting little-known receiver Travis Fulgham account for half of Carson Wentz’s completions. That included repeated pickups on 3rd and long, allowing the Eagles to string together drives and nearly complete a comeback.

As Tomlin said, the unit struggled out of the gate a season ago. They allowed 24+ points in their first three games, unable to slow down Tom Brady, Russell Wilson, and still losing to the 49ers despite forcing five turnovers. They turned things around the rest of the way, becoming one of the league’s top defenses.

2020’s numbers tell a different story than the tape. Pittsburgh’s defense still ranks high in many categories. They’re third in total yards allowed, sixth in points per game allowed, second in QB completion percentage, and are tied third in interceptions with six. They also haven’t faced a murderer’s row of great QB play and in the first half against the Houston Texans, Deshaun Watson carved them up.

The competing thoughts between the stats versus the tape versus the realization offenses are scoring more points than ever (offenses are averaging 25.7 PPG through the first month, compared to 22.8 PPG last season) that makes this group a little harder to evaluate.

A better gauge for this team will be over the next several weeks. That begins this Sunday against a Browns’ offense firing on all cylinders, handling the top-rated Colts’ defense this past weekend. That’s followed up by a solid Titans team then a road test against Lamar Jackson and the Baltimore Ravens.