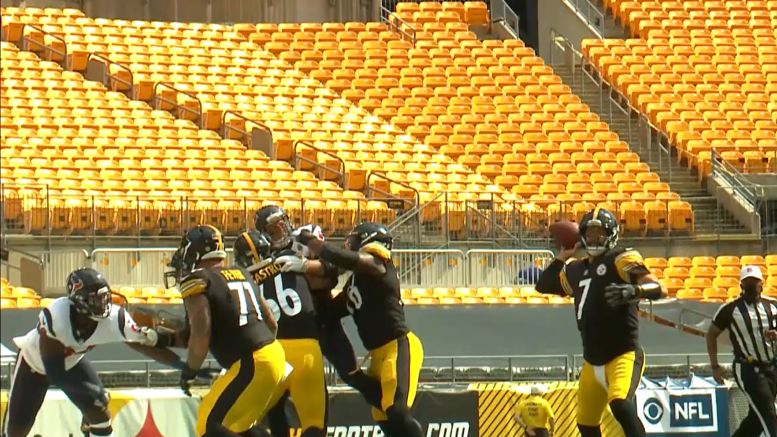 Ben Roethlisberger has been very reserved in his self-congratulatory language over the course of the first month of the 2020 season. The Pittsburgh Steelers quarterback, still only about a year removed from major elbow surgery in his throwing arm, has generally been pretty critical of his performance so far this year, despite posting very solid numbers.

To date, he has completed 100 of 143 passes for 1016 yards with 10 touchdowns and one interception. His completion percentage of just under 70 is the highest of his career—although his yards per attempt of 7.1 is very near the lowest as well. Still, he is on pace for a 400-completion, 4000-yard, 40-touchdown season. He has only twice before completed 400 passes, and has never thrown more than 34 touchdowns.

Head coach Mike Tomlin was asked about Roethlisberger’s harsh observations toward himself, including his stating that he felt as though he has not yet played a good game, and he suggested that it could be a shift in his perspective after missing most of last year.

“He’s very mentally sharp. Sometimes when you have the perspective that he has now—he watches the bulk of football in 2019, and oftentimes, when you are removed from your role and you get to watch it from a different perspective, it might change your perspective on performance and evaluation thereof”, Tomlin said.

“I’m not displeased with the overall trajectory of his play. I like the fact that he’s being critical of his performance”, he added. “I also like where he is from a mental standpoint right now, and we’re just gonna continue to work and knock the rust off and gain the rhythm that we’re accustomed to seeing from him, and hopefully, we better continue to win while we do that”.

As you might notice, his head coach is not tripping over his feet with laudations for his performance, either. “Not displeased with the overall trajectory” is very faint praise indeed, but that is sometimes just how Tomlin expresses himself.

One area in which Roethlisberger has been justifiably critical of himself has been in his deep passing performance, as he has really struggled to connect on the long ball so far this year—part of the reason he is ranked 22nd in the league in yards per attempt.

But the 38-year-old quarterback is still working his way back, from a playing perspective, from that elbow injury that he suffered a year ago. each game that passes is another step forward, back toward his old self, and a sense, toward his new arm.

He even half-joked following Sunday’s game wondering if the surgery didn’t make his arm stronger, something that he still has to learn to adjust to, after observing that his misses on deep balls have been long, rather than short.