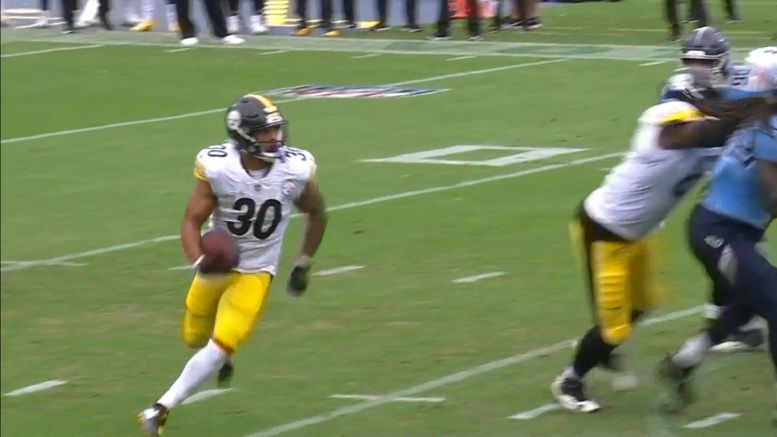 It seemed as though all of the attention entering Sunday’s game against the Tennessee Titans was on their running back, the NFL’s leading rusher and reigning rushing champion, Derrick Henry. While that is an understandable concern, and the Pittsburgh Steelers paid quite a bit of attention to it entering the game, he wasn’t the only Pro Bowl running back in the game.

And it was almost as though he knew that, and wanted to remind people of that fact. James Conner was a Pro Bowler in 2018, scoring 13 touchdowns in 13 games, but he went through a series of injuries last season that made many kind of forget what kind of player he is capable of being.

He was looking for a redemption season in 2020 during a contract year, but it looked like that might have been derailed early. He left the season opener with an ankle injury, and Benny Snell recorded a 100-yard game in his place.

But Conner returned just one week later and he has been rattling off 100-yard games since then. Entering the day, he recorded three 100-yard games over the past four weeks of football. He picked up 369 yards on the ground on 75 carries with four rushing touchdowns. Over the past four games, he has recorded 69 attempts for 360 yards, averaging 5.2 yards per carry, with one score per game.

While it wasn’t perfect, Conner had a strong first half in Tennessee, rushing for 60 yards on 11 attempts, including a 24-yard draw run. He also had two catches for 22 yards. But he had a receiving touchdown taken off the board due to a facemask penalty on the opening drive.

And then he dropped a would-be receiving touchdown on the second drive of the game before Benny Snell took the ball off the perimeter for the score on the next play. He also fumbled inside the 10-yard line, but was able to recover it himself. So not a perfect start, but overall a productive one with some no-harm, no-foul blemishes.

The second half was considerably more of a grind, mustering just 22 more yards on the ground on nine attempts, but with deeper nuance, was see that even four of those carries were successful run plays in context, such as a three-yard gain on 2nd and 5. He was stopped for no gain or worse four times in the second half. In all, he recorded 12 successful runs on his 20 attempts for 82 total yards.

Since drafting Conner, the Steelers have drafted three more running backs in the middle rounds, most recently Anthony McFarland, a speedy change-of-pace back out of Maryland, this year, and Snell, who profiles more in Conner’s style, out of Kentucky a year ago.

And the Pittsburgh product is in the final year of his rookie contract, looking very much like an RB1, but likely somebody else’s RB1 in 2021, given the Steelers’ salary cap situation. And with each strong game that he rattles off, it becomes less and less easy to put him squarely in the ‘fungible’ category—at least when he is healthy and on the field, which hasn’t been frequently enough.