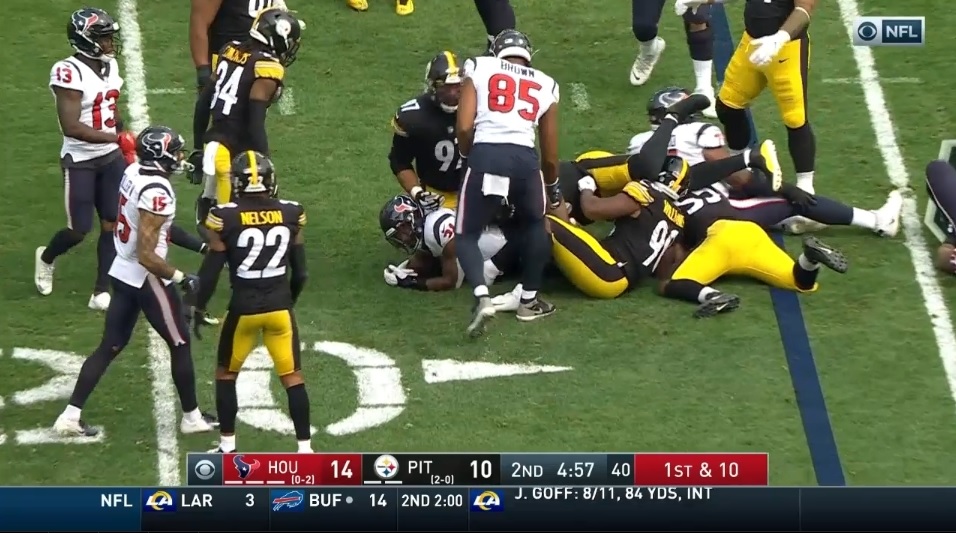 Through three games, the Pittsburgh Steelers have the NFL’s best run defense. It’s the best initial three-game stretch of run defense to begin a year in NFL history. You don’t reach that level of dominance without being physical and doing the little things it takes to stop rushing attacks. Short film room to show two examples from last Sunday’s win over Houston.

Some of the best run defense comes without actually making the tackle. Steelers’ fans know this. Casey Hampton, Brett Keisel, Aaron Smith were all key cogs in Pittsburgh’s run defense during the 2000s even if their numbers weren’t gaudy.

Same applies to Vince Williams on this play (though he obviously makes more tackles/high impact plays than say, Hampton). During this first half run, Houston is running a Dart scheme. Backside tackle pulling across with the running back following behind.

Williams steps down into the C gap and meets the puller, RT Tytus Howard, a large man at 6’5, 322 pounds. Williams hangs tough, drops his left shoulder, and absorbs the blow. Howard and Williams fall to the ground but that’s a win for the defense. Collapse and plug the hole the back should be running through. Devin Bush does a nice job to read the play, avoid the center climbing to the second level, fill his gap and make the stop. It’s just a two yard run for David Johnson, a successful run stop for the Steelers, forcing the Texans into 2nd and 8. That was followed up by a sack, putting Houston in 3rd and long, and forcing a punt. But it begins with that run stop on first down.

Two looks at it. One from the true end zone view and another with me zoomed in.

Takes a lot of guts to stand in there against a 320+ pound linemen so someone else can make the play.

Another play from earlier in the game. Not a puller but watch Williams blow up the insert block by the TE. Downhill, aggressive, no hesitation or false steps, and blows up the block on his way to smack David Johnson in the backfield for a two yard loss.

As I’ve said time and time again, run defense is an 11 man job. It’s hard to hide a weakness in any area of your team. Great run defenses like the Steelers have right now require players to do the dirty work and take pride in the details. Williams is one of those guys but you can say the same about virtually every player on this unit.