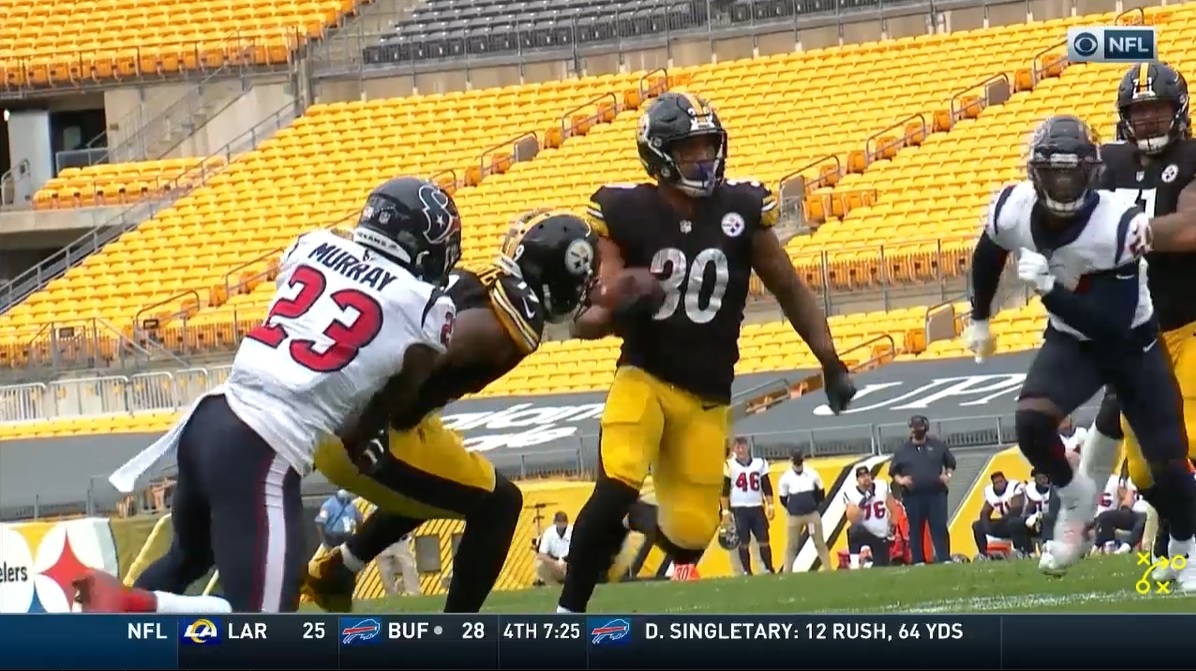 Through three games the Steelers running backs have compiled 398 yards and were the only team through three weeks to have a 100 yard rusher in each game. With that being said there’s still a ton of question marks about Pittsburgh’s running game as they’ve compiled much of their rushing yards in the final quarter of games against poor teams. The Steelers have averaged around 75 yards a game through the first three quarters and 65 in the final quarter. This sounds good until you look into the individual team’s current records and rush defenses all coming in the bottom half of the league.

You’d like to see the team have a more effective running attack throughout the game, and you started to see that in the Houston game gaining 92 yards through three quarters. A big part of that? The receivers blocking down field. It’s no secret it all starts up front for the run game, but as my college receiver coach always said, “anything past 10 yards is up to us.” What that means is once those initial blocks are set the receivers blocking guys at the 2nd level is truly what can spring those 10-yard runs into 20, 30, 40 yarders or even touchdowns.

Week 3 is really where you started to see the Steelers’ receivers assert their physicality in the run game. Players like JuJu Smith-Schuster, James Washington, and Chase Claypool starting to block downfield can add a whole different element to your run game.

When Smith-Schuster came into the league he was known for being a physical player and after his rookie season that included mashing hated-Bengal Vontez Burfict on a blindside block, many started to compare him to Hines Ward in that aspect of his game. He continues to show his blocking ability in his 4th season.

Here he notices the cornerback is in a man-technique with him turning towards Smith-Schuster. This prompts JuJu to “run off” the defender downfield as he knows he’ll follow him. Then, after 10 yards, he squares up with the defender and continues to block him out of bound and out of the play 25 yards down the field. Giving Anthony McFarland more than enough room to operate on the outside.

James Washington is another receiver that has started to show just how physical he can be as a blocker. If you remember last year against the Dolphins on Monday Night Football he laid a knockout block at the end of Diontae Johnson’s 50-yard touchdown just before halftime. Since, I’ve really taken notice how personal Washington takes blocking.

In the below clip you can see he does a great job at selling his route to the cornerback. Within the confines of his selling of the pass he’s doing what is called “closing out” or basically closing the space between yourself and the defender in order to get into position to block. He then gets square with his hands inside and keeps his feet moving. Another great rep blocking a cornerback 15-20 yards downfield that gives the ball carrier a ton of space to work on the outside.

Below is another solid rep from Washington. I love the aggression and urgency the Steelers’ receivers show in the run game. Again, he uses a foot fire at the line to sell the pass and close out the cornerback. Then, he keeps his feet moving to seal off the cornerback from any chance of making the play. In my breakdown of Antony McFarland’s touches I pointed out I would have liked for him to make an inside out move on the Texans safety here and test his speed on the outside. If he does, it’s likely he makes this an explosive play in large part to Washington’s effort.

Here’s another block from Smith-Schuster. This time he springs James Conner for the eventual game-winnign touchdown against the Texans. The announcers pointed out the block on the live broadcast and for good reason. You can again see the aggression and urgency JuJu shows here at the point of attack. He simply wants it more than the cornerback and bullies him out of the play. His aggression may have even led him to be a bit out of position towards the end of the block, but he shows good effort by “boxing out” the corner like a power forward on the hardwood leaving an angle for Conner to hit paydirt.

Lastly, I wanted to point out the Steelers newest receiver, Chase Claypool. At 6’5” 240 he’s a physical specimen and loves to show it off in the run game by bullying corners. Below, you can see he also uses the run off technique against man coverage and then uses his strength to push the corner while he’s off balance.  He continues to clear the corner from the play 15 yards downfield giving Conner space to pick up the first down.

One critique of Claypool I have is you’d like to see him eventually reel in some of his strength and use the technique that you saw in the above clips from James Washington. It didn’t matter in this clip, but eventually he will play more physical cornerbacks that will take advantage of the space he gives through the pushing and stop a big play. He has all the strength in the world, more than enough needed to grip defenders up like Washington and take them out of the play for good.

You can see cornerbacks don’t take kindly to getting bullied in the run game all day and can start to get a little feisty. That’s when you know you’ve done your job in the run game as a receiver when you can get in the DB’s head and possibly draw a cheap 15-yard personal foul penalty if you play your cards right.

Overall, you have to be really happy with what you’ve seen from the Steelers’ receivers in the blocking game. This type of effort in the run game is something that I haven’t seen for years as a unit and in general around the league you’ll often see receivers take run plays off. When you can have receivers blocking like tight ends (or maybe even better than tight ends in the Steelers case) it adds a whole new element to your offense. Combine that with an explosive back like Anthony McFarland starting to get carries, I wouldn’t be surprised to see a few long touchdown runs from him this year due in large part to some key downfield blocks from these physical Pittsburgh receivers.