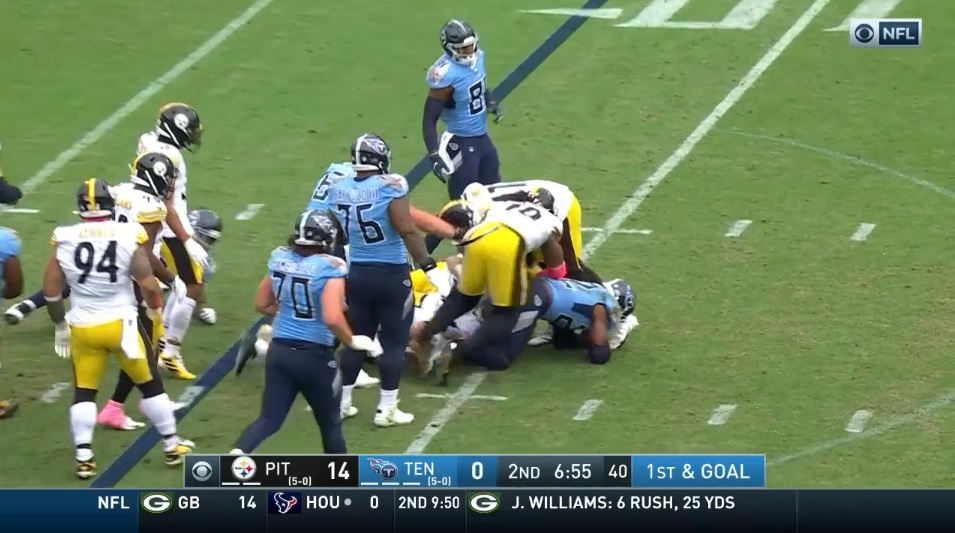 I’m having a ton of fun this year watching and breaking down the Pittsburgh Steelers’ run defense. They’re among the best in football, ranked 2nd in YPC allowed (3.4) and yards per game allowed (68.8). We’ve covered their successes time and time again, most often focusing on the guys who made the play. But run D is so much more about that. If you want a top unit like the Steelers have, all 11 guys better buy in. The guys who don’t show up on the box score are often just as important as the ones who do. That’s what we’ll show you today from Sunday’s win over the Tennessee Titans.

First play might be my favorite. Titans learning a lesson most of teams have painfully found out. Don’t leave TJ Watt unblocked on the backside. Watt comes flying in to drop Henry in the backfield. But this play is also made possible by Bud Dupree on the frontside. Titans are running a gap scheme with 6’4, 316 pound RG Nate Davis pulling out in front. His goal is to kick out ROLB Bud Dupree.

Dupree shut that thought down. The two collide at speed and Dupree wins the battle, jolting Davis back. An OLB knocking a guard back on his heels. You don’t see that too often. Henry has nowhere to go, the frontside sealed off and Watt coming in free from the backside. Watt gets credit for the tackle but Dupree has a big hand in this play. If he doesn’t set such a strong edge, Henry might be able to explode off Davis’ hip and Watt would have a tougher tackle to try and make. One of Dupree’s best reps against the run and as you know, he has a bunch of them.

Check out Robert Spillane here. Everyone knows about his head-on collision with Derrick Henry at the goal line. But Spillane got in those car crashes with Titans’ players all afternoon. Watch him press and fill the gap on the FB. Blows him up, clogs the lane, and Vince Williams flows down the line to fill and make the tackle. Spillane sacrificed himself to make the play. And honestly, as good as Devin Bush is, he’s not making this play with that level of physicality in the hole. In that limited sense, Spillane is an upgrade.

This is just all-around great team defense. Hard to even find out where to start. Start with Vince Williams shooting his gap to make sure he spills Henry down the line. Force him to cut laterally and not build up a head of steam. Alex Highsmith keeps the edge off the TE, staying clean and forcing the split zone block by the TE – the man coming across the formation – to account for him. Logs him inside but that clutters up the gap and the Y tight end can’t combo and climb to Spillane. That activates Spillane and frees him up; Highsmith is effectively forcing a double-team.

Chris Wormley wins his matchup and defeats his block. Joe Haden leaves his feet to crash into Henry. And Dupree, backside on this play, screams in to finish it. By plays end, there are at least five Steelers around the ball carrier. This is just quintessential team run defense. Everyone doing their job.

Another example. Williams, like the play above, reads the play and shoots his gap. Such a quick processor and the center can’t come off the block in time to reach him. That spills Henry, again forcing him to cut and bounce the run wide. Not letting him get downhill.

Stephon Tuitt defeats RT Dennis Kelly’s block and is first to get his hands on Henry. Haden finishes things off by dropping his shoulder and bringing him to the ground. CB doing the dirty work of a linebacker and Henry is kept lateral this whole play. Much easier to tackle him when he’s going sideways.

Last one. Tyson Alualu doing what he’s done all season. Wrecking centers. Tilted nose and barrels into center Ben Jones at the snap. Rolls into Ryan Tannehill, who barely has time to handoff to Henry, and nearly makes a diving tackle on him at the line. Vince Williams does a great job to defeat the cutblock (thumbs down is the coaching point) and Alex Highsmith flies in backside to finish it off.

These are a combination of little things that lead to big things. Run defense isn’t pretty. It’s doing your job. Filling your gap, sacrificing your body, doing what needs to be done even if someone else makes the play. That stuff doesn’t show up on the box score, help you get paid, reach a contract incentive. It’s selfless play and what makes this run defense elite. They’ll need to do the same against the Ravens on Sunday.