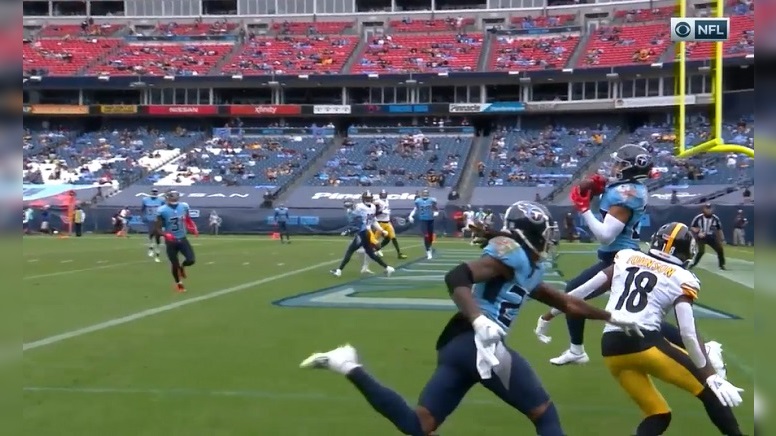 Pittsburgh Steelers quarterback Be Roethlisberger threw three interceptions in the team’s Week 6 Sunday road win against the Tennessee Titans and while unfortunate, only one of them should anyone take issue with. That only one was his first one, which came on the final play of the first half.

In case you forgot the situation and sequence, the Steelers had just been the beneficiary of an aborted punt and thus took possession of the football at the Titans 32 yard-line with 14 seconds left in the first half. The Steelers were already out of timeouts at the time as well. Unfortunately, their first attempt to run a play after the change of possession was interrupted by tight end Eric Ebron being flagged for a false start. That penalty moved the football back to the Titans 37-yard-line and presumably out of field goal range for kicker Chris Boswell (55 yard).

The Steelers lined back up in the same personnel and formation after the penalty and proceeded to run four vertical routes to the end zone against a very deep two-man zone coverage look. In short, the Steelers offense was trying for a Hail Mary while the Titans defense was trying to prevent one from happening. The subsequent deep pass to wide receiver Diontae Johnson down the right side never really stood a chance of being competed and it was easily intercepted in the end zone by Titans safety Dane Cruikshank and the first half then came to an end.

Had there only been five or less seconds left in the half ahead of that Hail Mary play being run, not too many people would have batted an eye at the desperation deep pass play call. However, with their being 14 seconds left and the Steelers being on the edge of field goal range and leading 24-7 at the time, it seems like a more conscience effort to get at least 3-points should have been made.

Quite honestly, a quick 7-yard out route to either Johnson on the right side or wide receiver Chase Claypool on the left side seemingly could have been completed with ease and with plenty of time for either wide receiver to get out of bounds. Seven more yards would have resulted in a possible 47- or 48-yard field goal attempt for Boswell, who has kicked very well so far this season. You can see the all-22 of the play below to see the route combinations and the coverage.

Even if a quick sideline throw to Johnson or Claypool had gone incomplete, perhaps there would have still been enough time left to try another quick pass along the sideline or a not-so-likely-to-be-completed Hail Mary attempt. Think about it, 14 seconds is a lot of time.

So, who called the ill-fated Hail Mary? Was it offensive coordinator Randy Fichtner? Was it Roethlisberger? Was it both? Will we ever know?

After the game was over, Tomlin was asked about the decision to go for the Hail Mary and not a shorter pass to possibly get into field goal range. He essentially blamed the decision on the false start penalty.

“Prior to the false start, all the things that you mentioned were on the table,” Tomlin said. “Once we lost the five yards on the false start then our mindset changed.”

Here’s the thing, as I mentioned above, the Steelers used the same personnel grouping and formation after the false start as they did on that penalized no play. Judging by the television tape, there didn’t seem to be much of a huddle while the penalty was being assessed. Maybe Roethlisberger just openly called fort the Hail Mary after the false start and we just couldn’t see it. Also, what was the play call had Ebron not false started?

Steelers head coach Mike Tomlin essentially glossed over all three of Roethlisberger’s Sunday interceptions during his Tuesday press conference and he wasn’t pressed any more about his decision to go for the Hail Mary instead of another 7 or so yards.

“Nothing to be concerned about”, Tomlin said on Tuesday. “One of them was at the end of a half and we were trying to make a play. The other one was a tipped pass. Sometimes that misfortune happens. And the other one was trying to make an aggressive play at the end of the game to a guy that he developed a great rapport with over the course of the game, and who had made several top-notch, tough, combat catches”.

Look, I’ve gone back and looked at all three of the Sunday interceptions and I have no issues with the final two. The first, however, I do have an issue with and more so with the playcall than Roethlisberger’s actual throw. Hell, he had almost no chance to complete that Hail Mary pass barring a minor miracle taking place.

Roethlisberger wasn’t asked on Wednesday during his media session about the end-of-half decision to throw a Hail Mary on the edge of field goal range with 14 seconds left and that’s very unfortunate. With Tomlin and Roethlisberger both essentially done with their media responsibilities for the week that leaves Fichtner to ask the hard and more pressing questions to on Thursday.

Somebody from the media needs to do just that on Thursday as the decision to call for a Hail Mary play with 14 seconds left on the clock while being on the edge of field goal range and up 17 points was the wrong call and even if a minor miracle had happened and the play resulted in a touchdown.

The Steelers won by 3-points thanks mainly to a missed field goal by the Titans. Had they wound up losing that game in overtime, there’d likely be a lot more talk about the playcall at the end of the first half that resulted in Roethlisberger’s first of three interceptions of the game and a waste of a gift from the Titans.