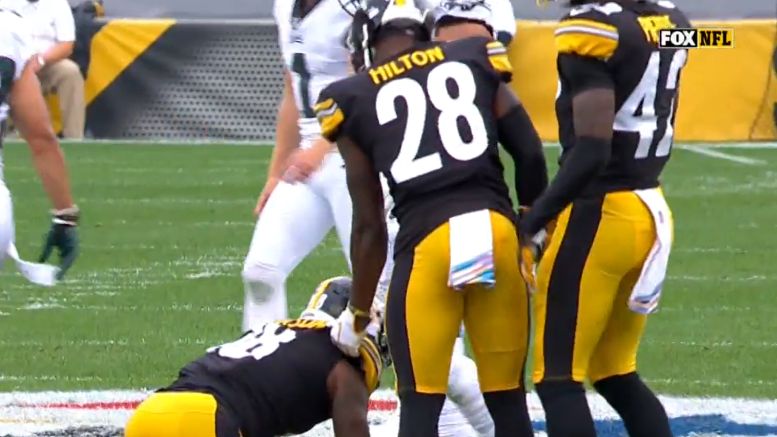 It’s a good thing that the Pittsburgh Steelers have seen the rapid emergence of rookie wide receiver Chase Claypool, because second-year Diontae Johnson has not been fortunate on the health front in the early stages of the 2020 season. While he has not missed a game, he has had to exit in the first half of each of the past two weeks.

After being targeted a whopping 23 times in the first two games of the season, Johnson has only been on the field for a couple dozen snaps over the past two games, seeing a total of three targets for one catch that lost two yards. He was injured today on a punt return that for six yards. In the previous game, he suffered a concussion on a rushing attempt.

That’s two injuries that the second-year man has suffered doing things outside of the purview of his primary job, which is running routes and catching passes. While I’m not advocating for the position, it beggars the question as to whether or not they need to consider dialing back his extraneous responsibilities, especially with Ray-Ray McCloud proving to be effective as a returner.

Many people were expecting Johnson to emerge as the Steelers’ number one threat this year. That may well still happen, but through four games, it seems as though the plan is emerging into one of a hot-hand approach—and right now, Claypool has the hot hand.

Johnson is entirely capable of being that hot hand, and he was the hot hand for the Steelers’ offense late last season and early this season. But you obviously have to be available in order to make plays for your team, so the team has to monitor the nicks and bumps that he is taking.

After yesterday’s game, head coach Mike Tomlin said that Johnson took a direct hit to his back, but left open the possibility that the young wide receiver would be available for next week’s game against the Cleveland Browns.

But minor injuries have been a common theme throughout his professional career so far, which literally traces all the way back to rookie minicamp. He was limited even then due to minor ailments, and really, throughout his rookie offseason.

Johnson, who had groin surgery early this offseason, told reporters that he put on some muscle over the past several months in order to help him last 16 games. So far, he’s not off to a great start, though of course, some things, like suffering a concussion, can’t be helped.