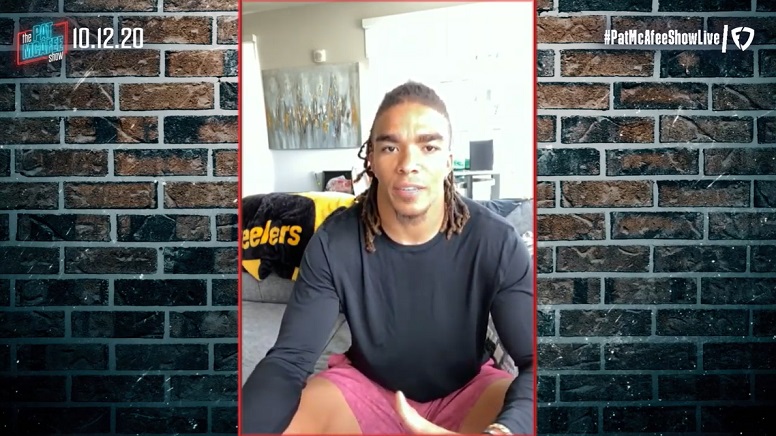 Pittsburgh Steelers rookie wide receiver Chase Claypool had an incredible game on Sunday against the Philadelphia Eagles as the Note Dame product scored four touchdowns in total at Heinz Field on his way to catching seven passes for 110 yards. On the heels of Sunday’s game, it certainly now looks like Claypool in well on his way to being the next hot connection for quarterback Ben Roethlisberger. On Monday, Claypool was a quest on ‘The Pat McAfee Show’ and during his interview he was asked at what point did he know that he and Roethlisberger would make a good connection for the Steelers.

“I honestly thought that as soon as I got drafted, but as a young rook, you can’t really go ahead and say that until you start producing on the field,” Claypool said. “So, I had to wait for my time and finally it came. So, I was thinking that the whole time.”

Claypool’s meteoric rise as an NFL wide receiver is quite impressive in light of him not having a normal rookie offseason program and camps due to the coronavirus pandemic. In fact, Claypool didn’t get to catch an initial pass from Roethlisberger until roughly a month and a half prior to training camp getting underway.

“That must must’ve been in June, Claypool recalled. “We had some PRPs [player run practices] going on and that’s the first time I met him, first time I got to throw with him. And as soon as I was able to catch one of his passes, I knew right away it was going to be a good year.”

Judging by what we saw on Sunday against the Eagles, Claypool, and Roethlisberger already seem to have a great rapport with each other. Claypool was asked on Monday if that’s the case and how that happened to come about so quickly.

“I think this year, especially, he’s really specific in what he wants from his receivers and after any play that he didn’t feel right about it, Claypool said of Roethlisberger. “he’ll go ahead and tell you, ‘Hey, you got to release this way. You have to break out of your route this way. This is where I’m going to put the ball.’ So, I think that really helps kind of knowing what to expect on each play.”

Claypool then proceeded to reveal how and when Roethlisberger goes about building a player-to-player rapport with him during games as well.

“Ether right after a play, or right before a play,” Claypool said. “So, if he calls a play in the huddle, he’ll be like, ‘All right, if you have this coverage, this is how I want you to run it. If it’s this coverage, I might not even be going to you, so you should run it this way to free someone else up.’ So, he’s always thinking and it’s crazy to think that someone’s been around for that long and they know what’s going to happen before happens.”

With his first four NFL games now in the books, Claypool has already registered 13 receptions for 261 yards and 4 touchdowns. His 20.1 yards per catch average is third-best in the NFL entering Monday night. He’s on pace to have 1044 receiving yards and 16 receiving touchdowns and both of those would be franchise records for a rookie.

Without a doubt, Claypool is a physical specimen as he has good height, weight and speed to play wide receiver in the NFL. He made it known on Monday that he’s aware of that.

“I’ve been blessed with good genetics for sure,” Claypool said.