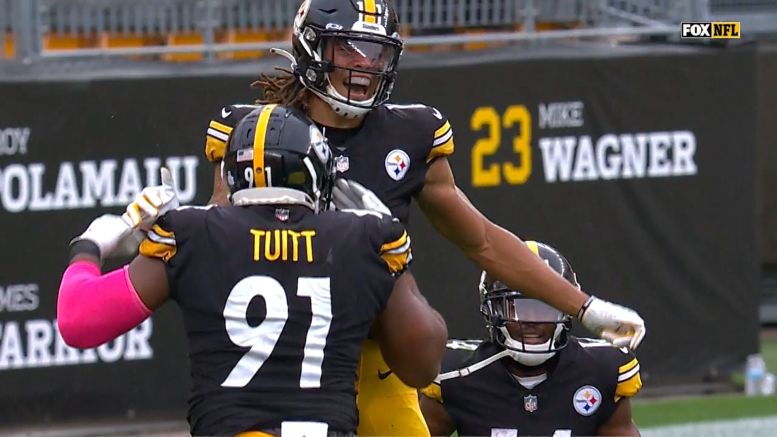 Chase Claypool just did something nobody in a Pittsburgh Steelers uniform has done since 1968, which is to score four scrimmage touchdowns in a single game. In just his fourth career game on Sunday, the rookie caught three touchdown passes and had another rushing score, giving him four for the game, and five on the season.

And does he want to do next? Of course, that’s what matters. Scoring four times in one game is nice, but it doesn’t define your career—or if it does, it means you didn’t have a very prolific and productive one. A big game catches people’s attention, and makes them want to see what you do after the fact.

“The most important thing is picking up where I left off”, he said yesterday during an appearance on the Rich Eisen Show. “Obviously I might not get four again, but another big week [would be good]. You’ve got to stack weeks. And next weeks against the Browns, a division rival, is a good time to do that”.

He couldn’t be more right about that, especially this year, as this is literally the best that the Cleveland Browns have been since they have been this incarnation of the Browns. They are off to a 4-1 start in 2020, besting any other start they have had since before the Browns moved to Maryland and changed their name to the Baltimore Ravens, ditching their history in the process.

Claypool didn’t just have four touchdowns, of course. He caught four passes for a total of 110 yards, his first 100-yard game of his young career. He also had 88 yards in the second week of the season, which of course was headlined by an NFL-best 84-yard touchdown reception.

But he averaged just three targets per game over the course of his first three games. Even though he played substantially in the game before Sunday’s contest against the Philadelphia Eagles, he still saw just four targets in the passing game. In his four-touchdown game, he was targeted 11 times, more than doubling his career total up to that point, now placing him in a tie for the third-most targets on the team so far this season.

Claypool has gotten extended playing time in the past two games because Diontae Johnson has left injured in the first half of each game, but given his recent performances, it’s unlikely that he will be spending the majority of the game on the bench anymore.

The Steelers will either have to find ways to rotate everybody in and keep the group fresh—as Mike Tomlin just started saying recently, the strength of the pack is the pack—or somebody will have to lose playing time, assuming the rookie keeps on his current trajectory.