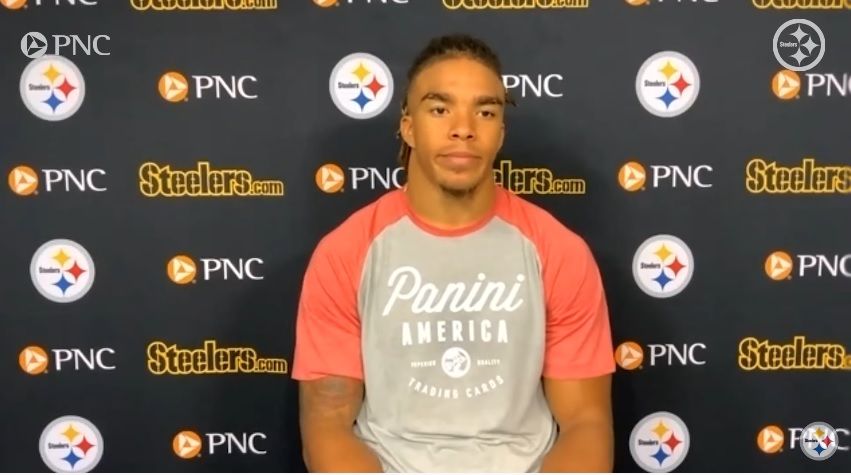 It’s safe to say Chase Claypool’s rookie year isn’t exactly as he envisioned it. On the field, maybe, it’s been as he pictured. He’s been excellent on special teams and is seeing his role grow on offense, highlighted by an 84 yard catch for his first trip to the end zone in Week 2 versus Denver. But everything else? It’s weird. Claypool is in a new city, like any rookie, but unique to this rookie class,  navigating a new world in the middle of a hundred year pandemic.

Talking to reporters via Zoom yesterday, Claypool was asked how he’s handling these sudden life changes.

“I haven’t really been able to see much of the city,” he said via the team’s Youtube Channel. “I’ve been to a couple places to eat. But other than that, just really been spending most of the day in my house. The guys are great. I try to get together with the guys off the field every now and then just to, um, just to hang out and keep my sanity. So it’s been good.”

One of those off-field invites included a rookie dinner over the weekend, Claypool getting stuck with the tab at the end. Hope his wallet isn’t hurt too bad.

Claypool’s also been keeping busy by starting up a Youtube channel, posting three videos before the season began. Since the regular season kicked off, he’s been quieter but told reporters he’ll soon post a video reacting to his ratings and player build in Madden 21. His channel’s already seen quite a bit of success with over 36,000 subscribers and all his videos easily surpassing 100,000 views. That’s following JuJu Smith-Schuster’s footsteps, whose built up an incredible social media following and a brand that honestly might be earning him more than he’s making on his rookie contract.

Like Bud Dupree and Steven Nelson, Claypool is remaining at his Pittsburgh apartment during the pandemic. This weekend served as a wake-up call to the league that one bad decision, malicious or not, could lead to an outbreak and domino effect. If anything though, staying at home and focusing on football may make this class all the more ready. There aren’t outside distractions of life in a big city that could interfere with football. Claypool’s work ethic has sure paid off.

While we focus on rookies from an on-field perspective, it’s always worth understanding the giant life shift they’re dealing with. A new city. New apartment. Away from friends and family for potentially the first time (though Claypool was born in Canada, so he’s probably used to the latter). The whole “adulting” thing of paying your bills, washing dishes, doing everything on your own. Based on everything we’ve seen so far, Claypool is handling life on and off the field as well as you could expect, a testament to the front office’s “hearts and smarts” mantra that have made them one of the better drafting teams over the last two decades.