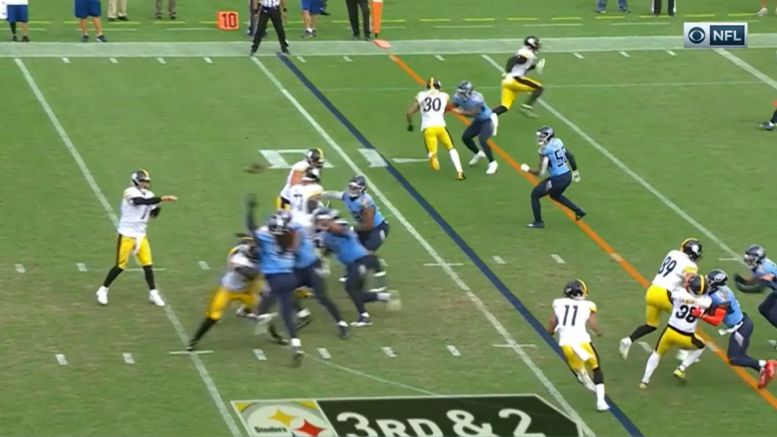 I’m indeed a little late getting to the subject, but what did everyone think about the officiating during the Pittsburgh Steelers Sunday road win against the Tennessee Titans? For the most part, I thought referee Shawn Hochuli and the rest of his crew did a fine job outside of one play. That one play was the offensive pass interference penalty that was called on Steelers running back Jaylen Samuels on a 3rd and 2 play from the Titans 9-yardline with 2:45 left in regulation. Not surprisingly, that one penalty call was really the only bad call that former NFL referee turned CBS Sports rules analysts Gene Steratore took issue with during that Steelers Titans game on Sunday.

During his Monday morning appearance on DVE Radio, Steratore talked about the officiating of the Steelers game against the Titans and why he took issue with Samuels being flagged for offensive pass interference on the previously noted play.

“The one that I didn’t like of the whole game, and I thought they did a pretty darn good job in that football game, I will say that, too, was the offensive pass interference they called against Pittsburgh,” Steratore said. “I thought that play was a really big play, which requires a couple of officials to communicate, and then there was the release of both of those receivers from Pittsburgh going down the field and the defense initiated that contact with both receivers.

“So, they continued to run knowing that the defense initiated contact with them. Yeah, their job was to get in the way of the defenders to create that little screen type block down field, but because of the way the action happened at the snap, I didn’t think that was a foul for offensive pass interference. It’s not an easy call, but it was one that I thought was really, as the game started to finish there, I thought, boy, this could be a big play that creates a difference in the outcome. And that was the one that I was critical of personally.”

Steratore’s opinion on the play matches mine. The play is below, and I have zoomed and slowed it for all to see better as well.

Had that penalty not been called and the quick pass to wide receiver Chase Claypool stood, Steelers head coach Mike Tomlin may have challenged the spot of the football. And even had Claypool been ruled a yard short, the Steelers could have either went for it on 4th and 1 or kicked a short field goal to go up 6 points. Instead, after the 15 yard penalty on Samuels was assessed, quarterback Ben Roethlisberger attempted to connect with wide receiver Juju Smith-Schuster down the middle of the field in the end zone for a touchdown on 3rd and 12 and the pass was intercepted.

The Titans took over at their own 20-yard-line following the interception and drove a good chunk of the field to attempt a 45-yard field goal with 19 seconds left in regulation time. Fortunately, Titans kicker Stephen Gostkowski missed the kick. Had he not and had the Steelers ultimately lost to the Titans in overtime, we surely would have been talking about the pass interference penalty called on Samuels almost immediately after the game had ended.