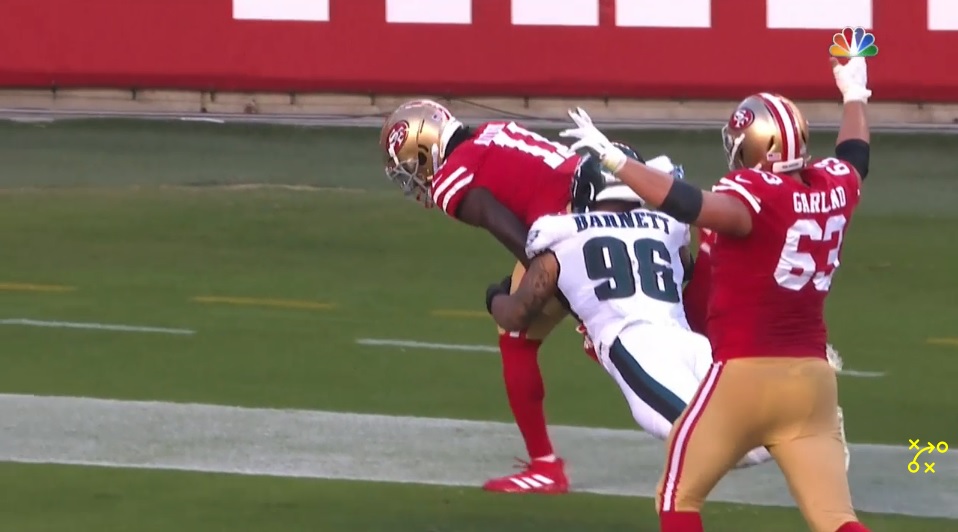 The Niners align with three wide receivers to the right and a tight end to the left with a running back flanking the quarterback to his right. To the right the Niners have Kendrick Bourne (84) in the tight slot off the line of scrimmage, Trent Taylor (15) is in the slot on the LOS and Brandon Aiyuk (11) to the outside of him off the LOS. To the left is tight end George Kittle (85) standing up next to the offensive tackle. Jerick McKinnon (28) is in the backfield with QB Nick Mullens (4).

The Eagles are in their dime package with 6 defensive backs on the field. Jalen Mills (21) is lined up across from Kittle. Cre’von LeBlanc is matched up with Bourne, Nickell Robey-Coleman (31) over Taylor and Darius Slay (24) on the outside. The deep safeties are Rodney McLeod (23) and Marcus Epps (22).

Pre snap Bourne will go in motion to the left taking LeBlanc with him. At the snap he will turn to the QB showing a screen look with Kittle looking to block out in front. This attracts 3 defenders. To the right side they are also showing a screen look with Aiyuk turning to the QB and retreating 6 yards behind the LOS while Taylor looks to block. Mullens tosses the ball to Aiyuk which ends up being a lateral. The first big block is by Taylor walling off Nickell-Roby. Four offensive linemen release to get downfield and two end up with the other blocks. Right tackle Mike McGlinchey leads the way attempting to cut block Slay. It’s not a good block but his helmet hits Slays knee and he hops away from the play. Right guard Daniel Brunskill has a more effective block taking down McLeod.

Aiyuk avoids the tackling efforts of DT Fletcher Cox (91) and LeBlanc slides off the legs of the receiver. Aiyuk has one man to beat and he hurdles Epps with ease for the 38 yard touchdowns.

Steelers Scenario – I am not a fan of throwing the ball to WR’s behind the line of scrimmage but the run this type of play then the most often used trio of WR’s the Steelers use in 11 personnel are Diontae Johnson, Juju Smith-Schuster and James Washington. Use JuJu as the motion man, Washington as the blocker and get the ball to Johnson their most dynamic WR after the catch.

The Niners are in the same personnel package with the same players on the field.  The left they have Aiyuk on the line of scrimmage with Taylor stacked just inside him. To the right Kittle is on the LOS with Bourne using a short motion starting from the right wing and will settle just behind and outside of Kittle.

The Eagles in their Dime package with play Man coverage with one safety over the top. Epps will be the deep safety. To the right of their defense they have Mills on the outside on Aiyuk and Nickell-Robey on Taylor with help from safety McLeod. On the other side LeBlanc is heads up on Kittle with Slay matching up with Bourne.

Aiyuk will run an In route with Taylor running a short Out. Kittle will release to the outside and run a go route up the sideline with Bourne running a whip route underneath.  Kittle is able to get behind LeBlanc and Mullens hits him in stride for a 38 yard gain.

Steelers Scenario – For the Steelers they could have Washington run the In route with Juju running the out. Johnson can run the whip with Eric Ebron running the go route. This would be longer version of the route Ebron ran for the TD against Houston.

The Niners line up with two tight ends on the right with two WR’s on the left. To the left San Francisco has Aiyuk in the slot with Deebo Samuel (19) lineup up wide.  Kittle is the inline tight end with Ross Dwelley flanking him to the right.

The Eagles are in their base defense and are going to rush six. Mills starts lined up over Samuel but will shift inside with McLeod switching to Samuel.  K’Von Wallace is lined up near the linebacker and will have Man coverage on Kittle. Slay has any receiver that comes to the right side.  The Eagles are in a Cover 0 which means the defenders are in Man coverage with zero deep defenders to help.

Pre snap Samuel will motion to his right into an orbit motion behind the quarterback and will end up in the right flat with McLeod following him. Mills is one on one with Aiyuk who runs up the seam. Kittle releases inside and will press out to get Wallace to drop his outside foot. Kittle then cuts inside of him and runs a Drive route across the field. Wallace has pretty solid coverage and the pass isn’t very good but Kittle hauls it in for 20 yard gain.

Steelers Scenario – Twelve personnel is usually Juju and Johnson at the receivers and Ebron and Vance McDonald.  Johnson would run the motion with JuJu running the go routes.  Ebron would likely be the TE on the routes with McDonald being the better blocker.