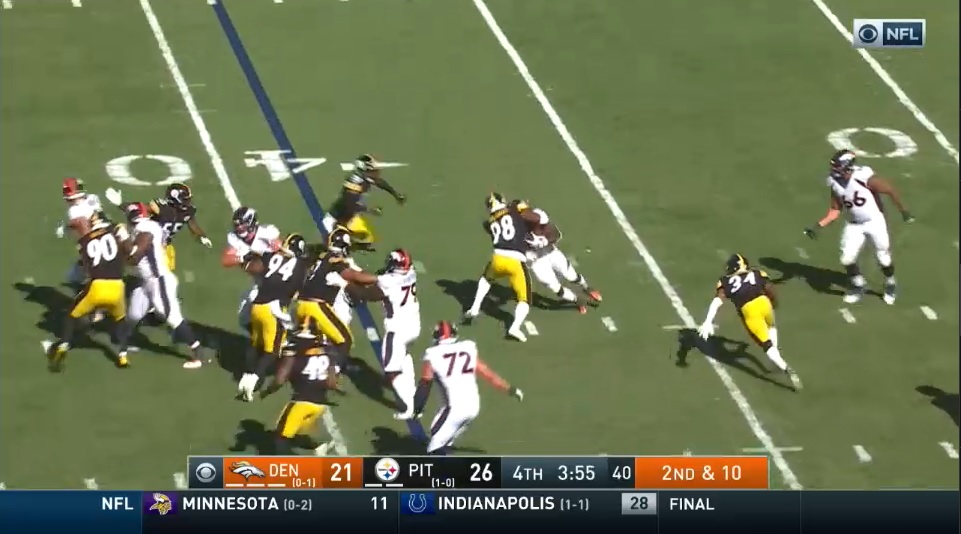 Vince Williams has been a man on a mission behind the line of scrimmage. Through the first two weeks, he leads the NFL in tackles for loss on non-sack plays. Here’s the top five.

Williams paces the field with five. And even if you included sacks, he’d still be in the lead with six, one more than anyone else in football. You’ll also notice fellow Steeler Tyson Alualu on this list with four.

Here’s a compilation of Williams’ five tackles for loss, excluding his Week One sack. Four against the run and the fifth on a screen pass.

Common themes of the play. Williams processing, taking good angles to the ball, showing explosiveness off the snap, and finishing with authority. No doubt his defensive line has helped him stay clean and not work through blocks but he’s been his typical physical self against the run.

It’s only been two weeks so the sample size is obviously small but the Steelers have the #1 run defense in football. They’re allowing only 66.5 yards per game, allowed just 2.9 yards per carry (tied for the best mark with Tampa Bay), and are one of just three teams not to allow a rushing touchdown. The Giants and Ravens are the other two. They’ve made both teams largely one-dimensional, though Denver saw first half success with the run before Pittsburgh stayed in their base, even versus three receiver sets, to contain Melvin Gordon.

As a team, the Steelers have 15 non-sack tackles for loss in two games. Williams leads the team with five, Alualu with four, while Bud Dupree is the third Steeler with multiple TFLs with two. Mike Hilton, Ola Adeniyi, TJ Watt, and Cam Heyward each have one.