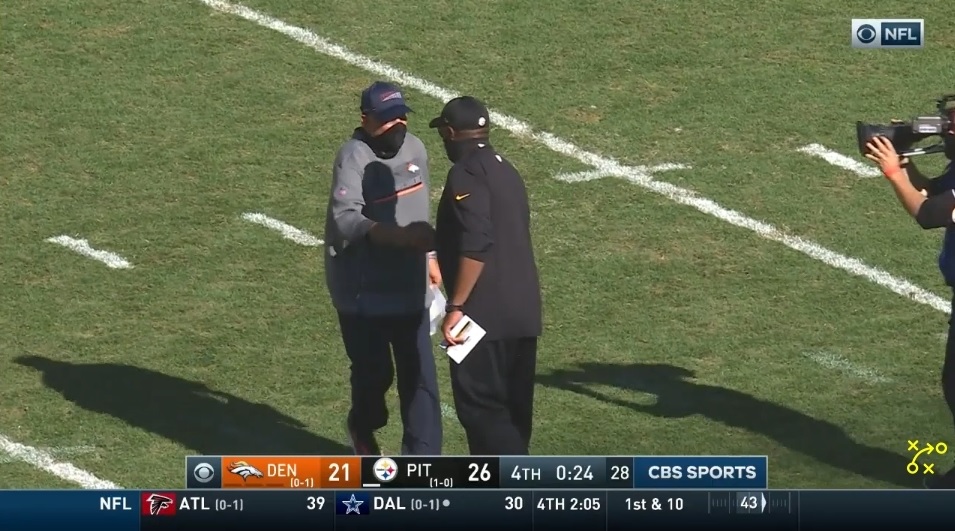 1. Corners Complacent? – I’ll start by saying my expectations may be a bit high based on last year but to me the duo of Joe Haden and Steven Nelson so far haven’t played up to their abilities. Uninspired is the word that comes to mind. There seems to be less fire in them compared to the rest of the defense. Haden was beaten easily this week by Courtland Sutton for 45 yards. Nelson was in coverage on Darius Slayton’s long TD in week one. No need to worry yet but it’s on my radar.

2. Splashing By the ‘Pool – Teams are always looking for splash plays and Chase Claypool made a big one today. Give credit to Ben Roethlisberger who put the deep throw on the money while taking a hit but Claypool beating another rookie deep, tracking the ball well and finishing to the end zone made it a complete play.  He was also known for his special teams work in college and he was in on two kickoff tackles and one on punt coverage as well.  Well done, Rook.

3. Ben is Behind – Coming back from his injury we know there would be rust and overall he has played well. However his timing is just a tick off with his receivers. He was consistently throwing the ball behind receivers the entire game. Receivers did a nice job to adjust but it’s something to monitor going forward. As well as he has played, if he can get that timing just right it will give the receivers a better shot after the catch.

4. Watt a Half – It’ll be interesting to watch the tape again but I had T.J. Watt involved somehow in 5 different sacks. He tripped up the QB when Bud Dupree forced the fumble that knocked out Drew Lock.  He met Cam Heyward at the QB for another.  He swatted at the QB’s arm to force him to step up into the Tyson Alualu sack. He had a solo sack himself and the had another combined sack with Terrell Edmunds. Really impressive first half and 2.5 sacks for the game.

5. Drops a Plenty – This goes along with Ben’s subtle inaccuracies as the receivers had to adjust to the ball so frequently but I had 5 drops in the game. I know some of them may have been tough catches but if you get two hands on it, you have to make the play. I had Diontae Johnson with two and Eric Ebron, Jaylen Samuels and James Washington each with one.  Not a trend you want to see continue.

6. Hilton Head of the Class – There are going to be a lot of decisions made after the season about free agents but how do you replace a guy like Mike Hilton. He led the team I tackles with 8 and had too big run stops early in the game, one while still being blocked.  He had a fumble recovery, as sack, made a quick tackle on a WR screen and had a pass break up.  He does so many different things against the run and the pass.  If he does go elsewhere, he will be very hard to replace.

7. The Forgotten Man – I get it. Ebron is like the new toy you get on Christmas. You want to play with as much as possible.  Meanwhile, that great toy you had just sits on the shelf.  Where is Vance McDonald in this offense? His numbers were down last year like everyone’s but he had 50 receptions and over 600 yards in 2018 and through two game he as 4 targets, 2 catches and 6 yards?  He needs to be used more often in 11 personnel for his blocking and get him involved in the game plan more than just a couple routes to the flat. Get back to using that tight end screen they used so well in 2018.

8. It Had to Happen Eventually – Minkah Fitzpatrick didn’t have a good game. If you look at the box score it doesn’t look that way with 6 tackles but he had his share of mishaps.  It started with a missed tackle on a crossing pattern.  He had a horse collar penalty on a Noah Fant reception that didn’t seem necessary. Then he had a defensive pass interference penalty that didn’t need to happen because he was already in a good position.  I’ve given him so much praise when he’s great; I have to throw this out there when he wasn’t.

9. Ugly Can Still Be Pretty – This thought is just a general yuck to whole game. Don’t get me wrong. A conference win is a beautiful thing but there was a lot not to like.  Too many drops on offense. The run game was pretty bad except for one play.  I think there were 5 defensive pass interference calls, a roughing the passer and a defensive holding.  Snell’s fumble. Another lost challenge. Devin Bush’s struggles in coverage. Allowing Denver back in the game. That being said, it’s a win.  That’ll be my mantra this week.

10. Things Can Change In a Week – Let’s end on a positive. The special teams play was much better all around.  Ray-Ray McCloud and Diontae Johnson had good kickoff returns. Johnson averaged 12.5 yards on punt returns. They were gifted a safety on a punt but they were there to make the play. Dustin Colquitt seemed unhappy with his first two punts but the other three were solid including two inside the 20. I was worried after the early punt where Johnson caught the ball low and ran into his teammate but lots of positives today.