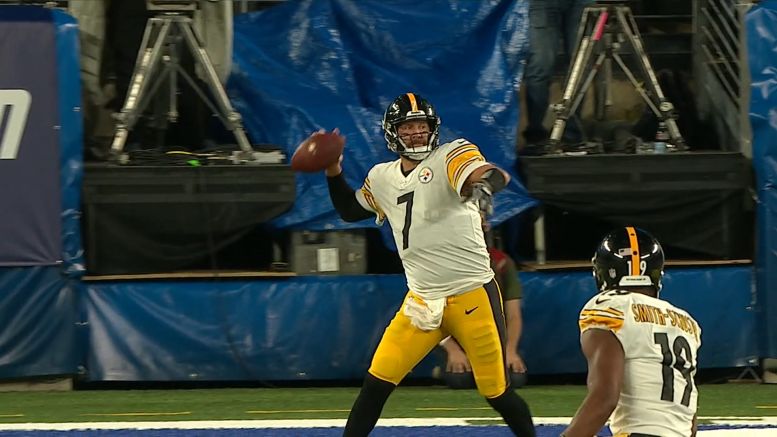 Pittsburgh Steelers quarterback Ben Roethlisberger has helped guide the team to a 2-0 start upon his return from last season’s seriously elbow injury that required surgery and a lengthy rehab process. While Roethlisberger has had some good moments and throws in the team’s first two games of the 2020 season, he’s also had a few others of both where he’s looked a bit rusty and untrusting when it comes to his abilities. On Tuesday, Steelers head coach Mike Tomlin was asked to assess Roethlisberger’s play and decision-making so far through the first two games and he was short and direct in his response.

“I like where he is,” Tomlin said of Roethlisberger. “I think there’s more meat on the bone. I’m excited about him continuing to knock the rust off and finding his All-Pro form, if you will.”

To date, Roethlisberger has completed 50 of his 73 total pass attempts for 540 yards with five touchdowns and one interception in the Steelers 0-2 start of 2020. His lone interception came in the team’s Week 2 home win over the Denver Broncos and the pass he threw on that particular play was one he admitted after the contest was over with that he shouldn’t have thrown.

Here is the Ben INT. He said after the game he should have pulled the trigger on the out route to Diontae against quarters but didn't trust himself. Instead, he forced one to JuJu after play extended. #Steelers pic.twitter.com/mAzYVEg8Sr

“The interception never should have happened,” Roethlisberger said after Sunday’s game. Diontae [Johnson] ran a perfect route, I need to trust it and throw it. And he was there, and he was open. And so, as I stepped up and tried to even throw it up to JuJu [Smith-Schuster] to let him make a play, it wasn’t even a good throw – like one-on-one ball. I made JuJu have to adjust too much. And so, a lot of the throws tonight that I missed are just me needing to trust myself and trust that the guys are in the right spots, because they are the right places. And so hopefully that will come.

While Roethlisberger was awfully hard on himself and his quality of play after Sundays win, he did make some throws and plays against the Broncos that resembled his preinjury form. One of those great throws was a deep pass to rookie wide receiver Chase Claypool down the left sideline that wound up being an 84-yard touchdown.

Another view of the Claypool homerun TD #Steelers pic.twitter.com/E3bDYsuyCb

In Sunday’s Week 3 home game against the Houston Texans, hopefully we’ll see an even better effort from Roethlisberger. The Texans defense hasn’t played too great in the team’s first two losses of the season to the Kansas City Chiefs and Baltimore Ravens. That unit has also yet to record a takeaway and has allowed 75 percent of all pass attempts to be completed for a total of 415 yards and four touchdowns.

In summation, on Sunday the Texans defense might provide Roethlisberger a great opportunity to tear a little more meat off the proverbial bone and knock some more proverbial rust off in the process.