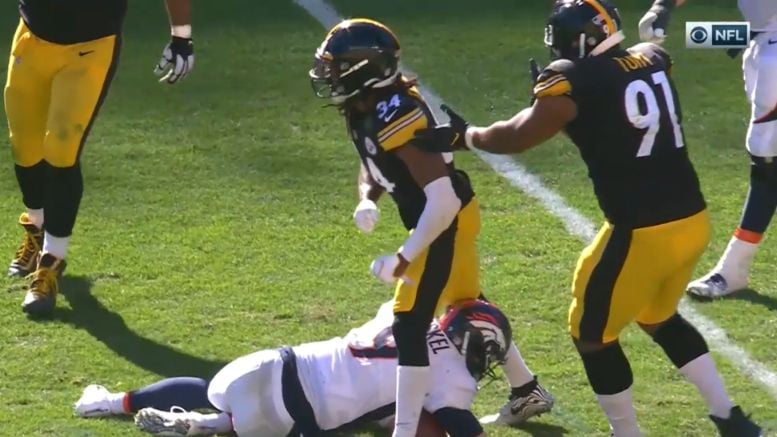 The Pittsburgh Steelers were clearly and consistently the better team on Sunday against the Denver Broncos for large stretches of the game, but if you look at the scoreboard and see that it came down to one final possession, you might think otherwise.

A lot of things went wrong for the Steelers to allow the Broncos to keep themselves in the game for about 58 minutes, until things suddenly changed on fourth down, needing two yards for a new set of downs from the Steelers’ 15-yard line.

That is when Terrell Edmunds got home and brought down quarterback Jeff Driskel—who started the game as Drew Lock’s backup before he was injured—to force a turnover on downs that allowed Pittsburgh’s offense to run out the clock, cemented by a 59-yard James Conner run.

“We were in an empty set. We released five, and I didn’t get my eyes in the right spot”, Driskell said of that play. “My eyes were in the wrong spot and that was on me. I have to find a way to get the ball out there. If my eyes are in the right spot, it happens a lot faster. I have to find a way to navigate a throw and get it to someone who’s running free”.

It was arguably the biggest play of Edmunds’ career, who did have one interception as a rookie. The sack virtually sealed the win, and even if he came in unblocked, he finished the play when he needed to. It was also something of a redemption moment after helping to keep the drive alive earlier due to a defensive holding penalty.

“I rushed a few times. When it came, when I had to come down, I was like, ‘if I’m open, I’ve got to make the play’”, he told reporters after the game. “It’s fourth down, everyone was out there. We were like, ‘we’re ready’. Everyone, we love the game. That’s exactly the words that were on the field. ‘Man, we love this, let’s go out and make a play’. So then it came and I was the open guy to make the play, so that’s how it came”.

It was the second sack of his career, his first on the season, and the defense’s seventh of the game. Outside of the first sack that forced a fumble and knocked Lock out of the game, it was also the most impactful even removed from the context of the game circumstances.

One can only hope that it serves as a spark for Edmunds as he continues to look for ways to make more plays, now in his third season as a starter for the defense. He leads the team with 12 tackles so far and one pass defensed.