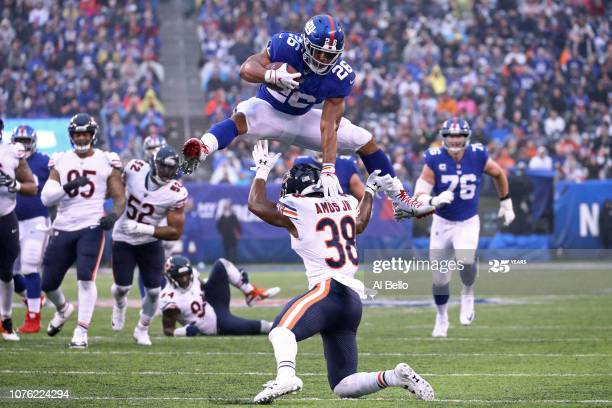 The Pittsburgh Steelers defense will face one of their greatest challenges of the 2020 season from a single player all year when they take on the New York Giants tomorrow night and have to try to bottle up running back Saquon Barkley, who immediately become one of the most dynamic and explosive players in the NFL as soon as he stepped on the field as a rookie a couple of years ago.

The Penn State product was the second-overall pick in the 2018 NFL Draft and was a Pro Bowler as a rookie, rushing for 1307 yards and 11 touchdowns, adding another 721 yards on 91 receptions and four more touchdowns. In all, he went over 2000 yards from scrimmage with 15 scores.

His follow-up season a year ago was not as successful, in no small part due to an ankle injury early in the season that cost him time, but he still put up over 1000 rushing yards in 13 games, and another 438 yards as a receiving option, with eight total touchdowns.

Starting off the 2020 season at 100 percent health, there is no reason to expect that Barkely won’t look better than he ever has before—unless T.J. Watt and company can stop him, and that is what the 2019 first-team All-Pro said last week that they were focusing on.

“Saquon’s a very well-rounded back”, he said. “That’s what he got picked in the top five. I was able to play against him in college when he was at Penn State. Just a specimen. Just a guy that’s very big that can run the ball inside the tackles, outside the tackles, has a good stiff-arm and a good spin as well. A guy that can do everything basically for them out of the backfield. So it’ll be a challenge, and that’s why, first and foremost, we’re always gonna have to start with smashing the run as a defense to be effective”.

Smashing the run isn’t easy, but the Steelers were one of the better defenses in the league in doing it last year. But it’s never enough with Barkley, who is always capable of making things happen and breaking off an improbable long touchdown run in Barry Sanders style—only faster.

In just two seasons, Barkley already has 10 rushes for over 40 yards in his young career, six of them going the distance. He was also able to turn four receptions into gains of 40 or more yards during that time as well, adding another score to his total.

One thing the Steelers did well last season was limiting the big play. They were one of only a small handful of teams last season that did not allow a run of 40 or more yards on the year. In fact, they only allowed two runs of at least 30 yards all season, and a whopping six total explosive runs. Two of them happened in Week Two before the Minkah Fitzpatrick trade, and one was an end-around by a wide receiver. So Pittsburgh may have as good a shot as any defense in the NFL in stopping Barkley.