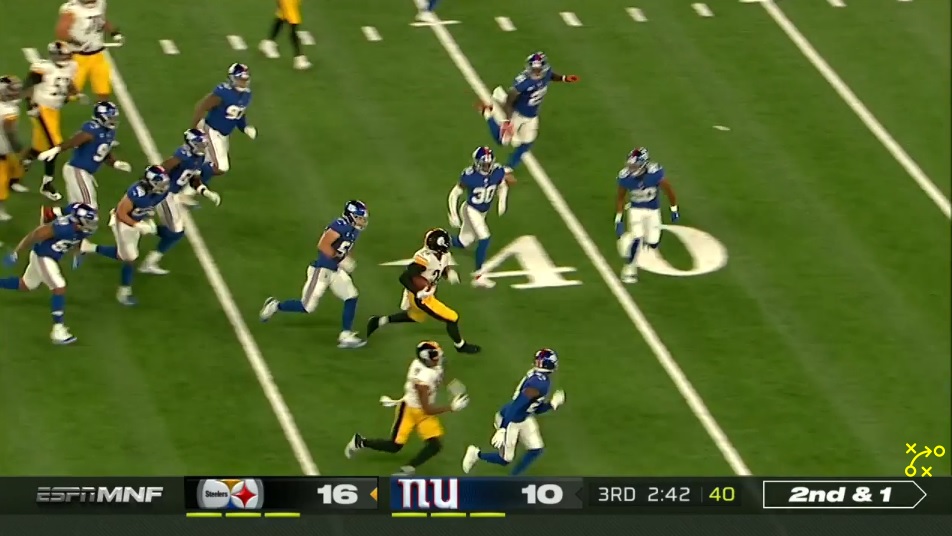 Aside from a potential devastating injury to Zach Banner, another sad, frustrating injury for James Conner, and a slow start early at MetLife Stadium, things went pretty darn well Monday night for the Pittsburgh Steelers in a 26-16 win over the New York Giants to open the season 1-0.

Ben Roethlisberger looked pretty darn good in his first game action in a full calendar year, while Benny Snell Jr. had a significant breakout game, potentially emerging as RB1 for the Steelers.

Defensively, Pittsburgh put a ton of heat on Daniel Jones, picked off two passes, and shut down Saquon Barkley throughout the game, leading to the solid 10-point win that wasn’t as close as the final scoreline read.

Now that the game is over, let’s get to the first Positional Grades piece of the season for the 2020 Steelers.

Roethlisberger looked rusty early, which was expected,  but once he settled into a rhythm he had the Steelers’ offense clicking, leading to three scoring strikes from the future Hall of Famer – two to JuJu Smith-Schuster and one to James Washington.

Roethlisberger also showed good touch on an early deep ball to rookie Chase Claypool and had some serious zip on the ball on short routes to Eric Ebron and Diontae Johnson.

Roethlisberger did take a bad sack, but overall he was decisive and helped get the Steelers’ offense rolling late in the second half by pushing the tempo.

I feel so, so bad for Conner. Seeing him as frustrated as he was on the sideline after exiting with an ankle injury was devastating for me. He worked so hard once again this off-season, but his body keeps failing him.

However, Conner’s injury opened up an opportunity for Snell Jr., who broke out in a big way. All that weight he lost this off-season paid off as the second-year back rushed for a career-high 113 yards on 19 carries, showing power between the tackles and straight line speed on the boundary.

He needs to hold onto the football though.

Jaylen Samuels did nothing with his touches, gaining 3 yards on two touches. He’s just a guy. Nothing more.

Smith-Schuster sure shut up a lot of people Monday night, no?

With Roethlisberger back, JJSS looked like his old self, putting up a 6/69/2 line on six targets. He was quick in and out of his cuts and found himself working open out of the slot with ease. It’s good to see 19 smiling again. He also came up with a mammoth fumble recovery on a long run by Snell, outmuscling a number of Giants to retain possession.

Johnson got off to a really rough start (more on that later), but once he cleared his head at halftime he really emerged in the second half, finishing with six catches for 57 yards, showing some shake in the open field throughout the second half.

Washington had arguably the play of the night, miraculously staying on his feet to power through multiple defenders for a 21-yard touchdown. I think he’s in for a really good year with 7 back under center.

Claypool had a strong showing in his NFL debut, tapping two feet inbounds for his first career catch – a 28-yard grab down the right sideline – and then bowled through three defenders for his second catch of the game.

Just two catches for 21 yards for the duo of Ebron and Vance McDonald, which was a bit underwhelming. However, Ebron’s catch picked up a key third down.

I did think McDonald was solid in the run game, especially in the second half.

It will take some time for Roethlisberger to get in sync with Ebron and McDonald, but it’s nice to have some depth at TE moving forward.

It wasn’t a great night overall for the Steelers’ offensive line, but they got the job done in the second half as the Steelers pulled way for the win.

I was a bit concerned early with the likes of Stefan Wisniewski, Alejandro Villanueva, Maurkice Pouncey and Zach Banner struggling, but the veteran group turned it around.

Pouncey continued to have a few low snaps while Wisniewski looked overmatched against a stout NYG defensive line. The group got rolling in the second half though, helping Snell Jr. roll to a big night.

However, Wisniewski and Banner left the game with injuries and didn’t return. Here’s hoping Wisniewski is okay because David DeCastro is still banged up. It doesn’t look good for Banner.

What a night for the front three.

Cam Heyward came up with his first career interception and lived in the Giants’ backfield much of the night, while Stephon Tuitt came back in a big way, recording a sack and a tackle for loss.

Even Tyson Alualu had a good night, recording two tackles for loss, helping the Steelers’ defensive line completely shut down the Giants’ run game with Barkley, who finished with 6 yards on 15 carries.

I sure wish there was a way to keep Bud Dupree long-term.

The former first round pick has really developed into an elite-level edge defender. He caused havoc all night long for the Giants.

Dupree finished with a number of tackles behind the line, hit Daniel Jones once and broke up a pass that led to Heyward’s pick.

Inside, Devin Bush and Vince Williams got off to good starts in 2020. Bush finished with seven tackles and was good against the run and sound in coverage. Williams recorded his first sack of the year and lived behind the line, finishing with three tackles for loss.

Not a good night overall for the Steelers’ secondary.

Steven Nelson gave up two touchdowns to Darius Slayton, while Joe Haden was called for a bogus pass interference penalty that set up the TD to Slayton. Regardless of it being bogus or not, Haden made a mistake.

I think Nelson will be fine but he let Slayton create too much separation.

Mike Hilton had a good night in the slot, recording a sack, breaking up a pass and recording two quarterback hits. He’s arguably the best slot DB in football right now.

At safety, Minkah Fitzpatrick had a quite night, but overall he took away the middle of the field. No, that touchdown to Slayton wasn’t his fault. That’s on Haden getting over the top.

Terrell Edmunds struggled at times getting off to a slow start in Year 3. He needs to turn his head around to find the football when the opportunity is there.  That said, he did lead the Steelers in tackles on the night.

Dustin Colquitt got off to a slow start punting the football, struggling with hang time early, leading to good returns by the Giants. He redeemed himself slightly by dropping is final punt inside the 20-yard-line, pinning the Giants back deep.

Chris Boswell missed an extra point to open the year, but he was perfect on field goal attempts. That said, he had a boneheaded kickoff, which is concerning. Here’s hoping this isn’t a year of struggles for Boswell.

I was very pleased with Ray-Ray McCloud’s 33-yard kickoff return as he showed serious juice and elusiveness, which is something the Steelers haven’t had back there in awhile.

Johnson at punt returner though was a disaster. He muffed the first punt of the game, was shaky on his second fair catch and overall didn’t look confident back there.