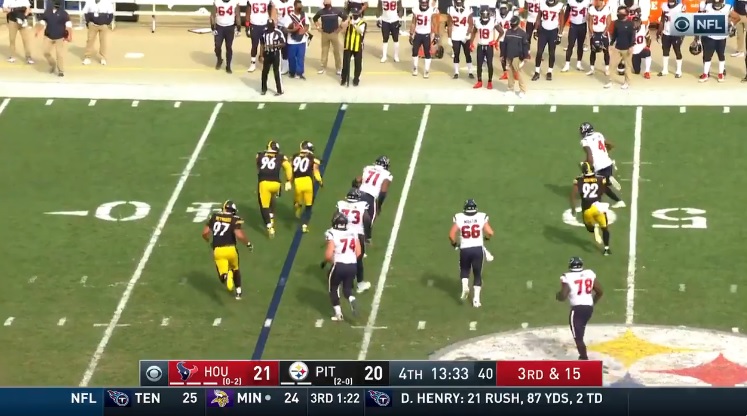 After struggling to slow down Houston’s offense in the first half, the Pittsburgh Steelers defense held their offense scoreless in the Steelers’ 28-21 win.

The Steelers forced a three and out on the Texans first possession, and used an 11 play, 63 yard drive that saw them get into the red zone end in a 33 yard Chris Boswell field goal to put them up 3-0. The Steelers were helped by a defensive pass interference call on a third down earlier in the drive.

Deshaun Watson and the Texans would respond, as Watson would connect with Brandin Cooks for a big gain. Later in the drive, Watson connected with Randall Cobb on a crossing route for a 30 yard touchdown to put the Texans up 7-3 mid way through the first quarter.

After three straight three and outs, two by the Steelers, Watson and the Texans took over early in the second quarter. Two completions of 20 yards from Watson to David Johnson and Kenny Stills put the Texans in the red zone. Their drive would be capped by a two yard David Johnson to put them up 14-3.

Rookie running back Anthony McFarland would get the Steelers offense ignited on their next drive with a 20 yard burst. Ben Roethlisberger would complete passes to his tight ends Vance McDonald and Eric Ebron for gains of 15 and 17 respectfully to get them into the redzone. Ebron would score his first touchdown in the Black and Gold on third and goal, to cut the Texans lead to 14-10.

After forcing another Texans three and out, the Steelers would drive right down the field again in the two minute drill. Big Ben would complete all five of his passes, capped off by a JuJu Smith-Schuster 26 yard touchdown to put the Steelers ahead 17-14 with 1:14 left before halftime.

However, the Texans’ offense would wake up and engineer a 50 second drive in just five plays. Watson would find Randall Cobb once again for big gains of 15 and 18, and then find Will Fuller for a 14 yard touchdown to put the Texans up 21-17 at the half. The Steelers defensive line only got to Watson twice in the first half.

The second half would go much differently for the Steelers defense. The offense would drive down the field on their first possession of the second half and come away with a 26 yard field goal after a 12 play, 62 yard drive. The defense would force two straight three and outs to start the half, as both teams combined for four straight three and outs throughout the majority of the third quarter.

The Texans would take over late in the third quarter, still leading 21-20. After Watson found Randall Cobb for a 34 yard gain to get into Steelers territory, the Steelers would force a third and long at their 43 yard line. The black and gold defense pressure Watson and force him into throwing an interception. Mike Hilton picks off the pass, forcing the first turnover of the game early in the fourth quarter.

James Conner would take over the fourth quarter along with the offensive line. Conner would pick up 32 of the 79 yards of the Steelers 12 play drive, capped off by Conner’s 12 yard touchdown run. A two point conversion by Smith-Schuster put the Steelers up 28-21 with 6 minutes left in the fourth.

For the third time in four second half possession, the defense would force a three and out. TJ Watt would come up with a sack on first down to put the Texans behind the sticks.

Conner would start off the final drive of the game with a big burst, this time 25 yards to set the Steelers up just past midfield. After the Texans forced a fourth and one, Big Ben would find James Washington for a seven yard gain to continue to milk the clock. Another third down conversion came from Chase Claypool who picked up 24 yards to ice the game for the Steelers. The black and gold now move to 3-0 after their 28-21 victory of the Texans.

Roethlisberger finished the game completing 23 of 36 passes, 237 yards and two touchdowns. Conner finished with 108 yards, eclipsing over 100 yards for the second straight week. TJ Watt finished with one sack, while Bud Dupree kept his hot season alive with 1.5 sacks. The Steelers defense only allowed 29 rushing yards of 15 attempts.

The Steelers go on the road next week to face the Tennessee Titans next Sunday, a 1 pm start time.