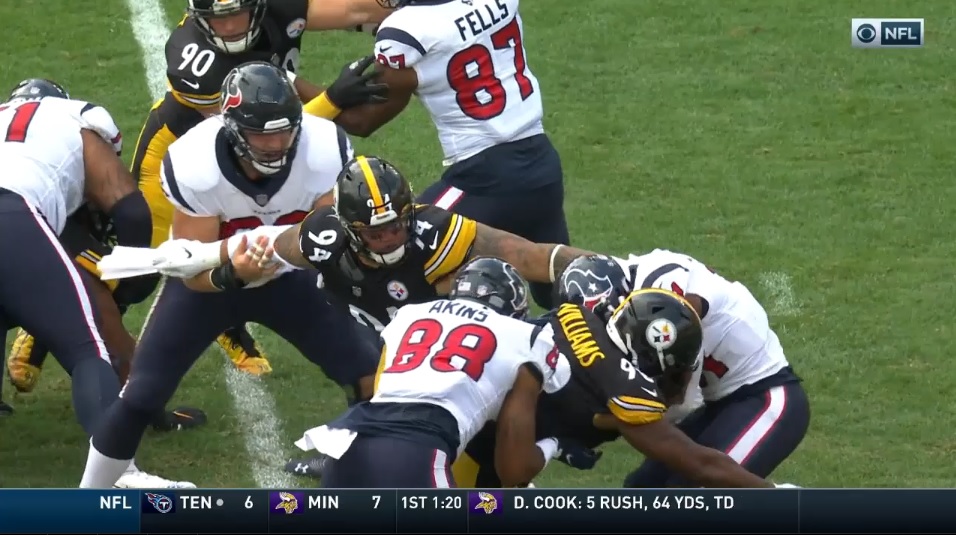 Attention towards the Pittsburgh Steelers’ defense has fallen into two camps through the first three games. One positive, one negative. To the positive, the immense pressure on the quarterback. 15 sacks through three weeks, the first defense to do so since the 2016 Minnesota Vikings. To the negative, a secondary that doesn’t feel as consistently reliable as the almost unmatchable standard set a year ago.

Almost none of the attention has focused on the core tenant of Pittsburgh’s defense. Run defense. It’s impossible to overstate how good this unit’s been.

In Week One, Saquon Barkley was shut down. 15 carries, six yards, one of the worst performances of his otherwise excellent career. Same story Sunday versus Houston. The Texans rushed for 29 yards, RB David Johnson bottled up with 13 carries for 27 yards, a “long” of five measly yards.

Denver has been the only team to level any sort of success against Pittsburgh’s front seven. No doubt helped by ex-Steelers coach Mike Munchak coordinating the Broncos’ run game. Melvin Gordon busted off a few impressive first-half runs but Pittsburgh adjusted in the second half and ultimately, Denver averaged only four yards a carry.

It’s a front seven that’s physical, aggressive, blending an old-school mentality with new age design. Run stunts against two-back sets to confuse run schemes. One-gapping to get penetration in the backfield. But at the end of the day, it’s about the personnel. Guys like Cam Heyward, Vince Williams, Tyson Alualu and his fountain of youth. TJ Watt and Bud Dupree, two of the best EDGE setters in football. Run defense is an 11 man job. The corners, the safeties, the rotational players, it’s an all-hands-on-deck attitude that’s creating this level of play.

Sure, a little bit of context is worth mentioning. The Giants and Broncos played from behind for most of the game. Houston barely had the ball to do any running with. Viewing run defense on a per-carry basis, the Steelers also rank first at just 2.7 yards per carry. Only Pittsburgh and Tampa Bay are under three yards allowed. And they’ve allowed just one rushing touchdown, a two yard run by Johnson yesterday, all season.

They’re forcing teams, even ones like Houston capable of passing the ball, to become entirely one-dimensional. That makes them predictable, keeps them in 2nd and 3rd and forever, and lets an already fierce pass rush pin their ears back and tee off.

This Sunday will be a greatest test when the Steelers travel to Nashville and take on the Titans. They’re as run-focused as any bunch and with good reason. Derrick Henry is arguably football’s best power back, rushing for an NFL-leading 319 yards and two scores.

It’s iron sharpen iron this weekend. But if the Steelers continue their stingy run defense and force Tennessee to win through the air, Pittsburgh will move to 4-0 for the first time since 1979.