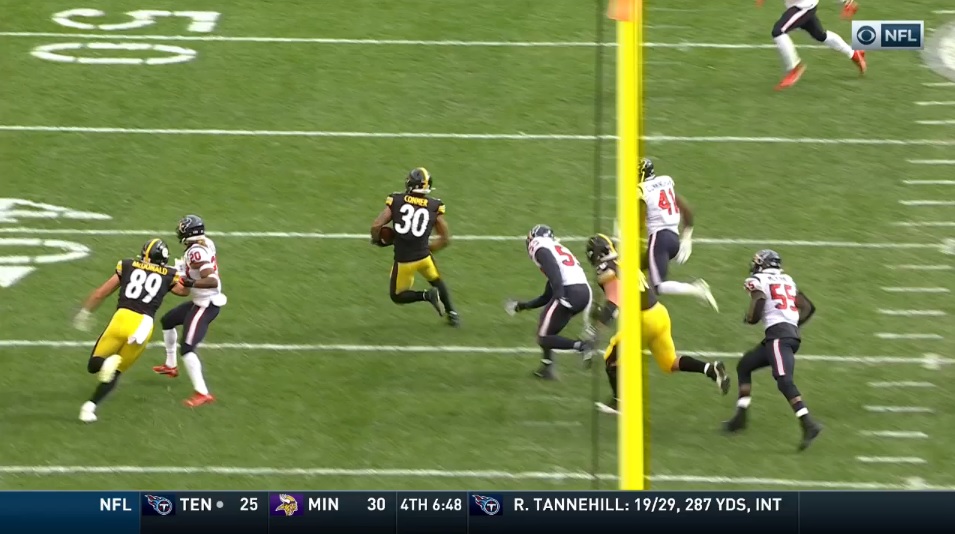 Weird, wild comeback victory for the Pittsburgh Steelers. Let’s end your Sunday with some additional weird.

– Pittsburgh allowed 21 first half points to Houston before pitching a shutout in the second half. That hasn’t happened since a 2015 win over the Denver Broncos. Down 27-13 at the half, Pittsburgh stormed back to win 34-27.

Since the 1970 merger, the 21+ points in the first, zero in the second half disparity has only happened ten times by the Steelers, including today.

– The Steelers have a 100 yard rusher in each of their first three weeks. Benny Snell in Week 1, James Conner the last two weeks. That hasn’t happened since Willie Parker did it three straight in 2007. It’s the only other time it’s happened in franchise history.

– The Texans ran for just 29 yards today, matching the same output of the New York Giants in Week One. It’s the first time in Steelers’ history they’ve held an opponent to under 30 yards rushing twice during the first three weeks of the season. Since 1989, here are the three other teams to match that feat: 1995 49ers, 1996 Dolphins, 2019 Ravens.

– Pittsburgh’s 419 rushing yards through the first three weeks are the most they’ve had since 2014.

– 10 different Steelers have caught a pass this year.

– Pittsburgh has 15 sacks through three games. That puts them on pace for 80 over a season. They of course won’t do that but could 2020 be the year they reach 60? Already a quarter of the way there.

– Steelers won the time of possession battle in a big way. Houston had the ball for just 23:09, the fewest by any team against the Steelers since the 2016 Bills. Pittsburgh possessed the ball for 11:50 of the final 13:27.

– Much cleaner game today. After ten penalties against the Broncos, just two day for the Steelers.