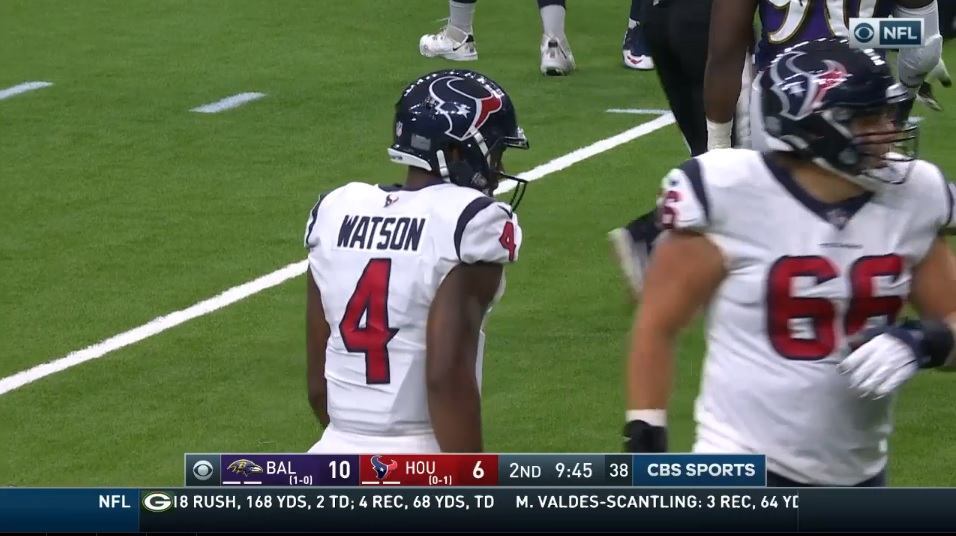 Here’s our breakdown of the Houston Texans’ offense.

Leading the run game is David Johnson, acquired in the DeAndre Hopkins deal that I’ll still never quite understand. Johnson is looking healthier than last season, averaging a healthy five yards per carry through their first two games. 22 carries for 111 yards and a Week One score against the Kansas City Chiefs.

Deshaun Watson is of course a threat to run with his legs. He has 11 carries and one touchdown. Duke Johnson has been limited by an ankle injury, carrying the ball only five times, the only other running back on the roster to record a carry. Will Fuller technically has a carry on an option play which turned into a backwards pass from Watson.

This run game ranks 30th in yards but 15th in yards per carry. The low yardage is indicative of them falling behind against two of the NFL’s top offenses in Kansas City and Baltimore. They can run the ball effectively so don’t let the aggregate numbers fool you.

The run scheme is varied, as most NFL offenses are at this point. There’s a fair share of zone schemes and split zone runs with the Y aligned off-ball and pulling across to kick out the EMOL. Couple examples.

Houston also runs dart an uncommon amount. Dart runs are the backside tackle pulling, something the Steelers have done a little bit of in past years but the Texans make it relatively routine in their run game.

Some other Texans’ offense stats. Averaging 18 points per game, that’s 27th in the league, while struggling on third down at 36% (that’s also 27th) though they’re finding the end zone on 80% of their red zone trips.

Led by Deshaun Watson who honestly is one of my favorite QBs in football. Not the best, though he’s upper tier but he’s just a lot of fun to watch. I know Josh will talk about it more but Watson is one of the best off-platform throwers in football. Maybe only second to Patrick Mahomes. He’s gotten used to throwing from a muddy pocket so the Steelers pressure won’t always bother him.

Through two games, Watson is completing just about 2/3 of his throws with two touchdowns and two picks. His 7.8 YPA is 14th in the NFL, slightly above average. He’s been under pressure a lot. Some of that is created by him, some of it created by a lack of weapons, and some of it by an offensive line struggling to pick up stunts and blitzes. He’s been sacked eight times, tied for the most in the league.

Will Fuller and Brandin Cooks are the team’s top two weapons with Hopkins thriving in Arizona now. Both are vertical threat in scouting report and usage. Fuller has an 8/112 line (14 YPC) while Cooks is at 7/115 (16.4 YPC). Watson’s also leaned on tight ends with the pressure he’s been under. Jordan Akins has the team’s most receptions with a 9/94/1 line while Darren Fells is at 4/42/1.

Y Stick is going to be their favorite concept if the Steelers come out as aggressive as they were the first two weeks. TE runs a five yard out route, a great blitz beater if you’re bringing an off-ball LB or DB.

They pair their split zone run game and Watson’s athleticism well. The Y off ball is a strong sign he’s pulling across on a split zone but they’ll fake that action and get him in the flat too. The short pass game plays well off the run game.

Coming off of back-to-back weeks in which the Steelers’ front seven turned out the heat on opposing quarterbacks in a serious way, Pittsburgh faces its toughest and most athletic test under center with superstar Deshaun Watson riding into town carrying the 0-2 Texans on his shoulders.

Watson is without his No. 1 target in DeAndre Hopkins, who was puzzlingly traded to the Cardinals in the off-season, but the fourth-year signal caller still has plenty of weapons to work with in veteran receivers such as Randall Cobb and Brandin Cooks that are pairing with mainstays Will Fuller and Kenny Stills.

Plus, Watson can still make throws like this, regardless of who his receiver is.

That throw right there shows off not only Watson’s insane arm strength, but his accuracy overall.

Without Hopkins, the Texans have had to get creative and utilize play action a little more, getting guys open for Watson to throw strikes to.

They did a nice job early against Baltimore in Week 2 getting guys open on crossers and deep over routes on play-action, making for easy throws for Watson that were designed to get the ball out in a timely fashion.

Take this throw to Cooks down the field in the first quarter off of play-action.

That’s a nice clean pocket that shifts right for Watson, allowing him time to survey the field and fire a dart to Cooks, who twists and turns the Ravens’ safety in space.

If Cooks can stay healthy and avoid the dreaded concussion issues this year, the Texans have themselves quite a trio with Cobb and Fuller. Fuller has clearly emerged as Watson’s go-to guy, but it was puzzling to see the Notre Dame product go without a target in Week 2.

Fuller seems to be thought of as just a burner, but he’s really developed into a solid route runner who isn’t afraid to go over the middle and can serve as a possession receiver, depending on the matchup.

Look at his release here. He does a great job of avoiding the press and then bursts into the middle of the field for the 20-yard catch. He’s going to be dangerous Sunday at Heinz Field.

Aside from Fuller, one guy I’ve noticed who is super underrated on the Texans’ offense is third-year tight end Jordan Akins, who is a physical specimen at tight end. He’s big and physical and moves really, really well for his size.

Through two games the 6’4” tight end has nine catches and is really developing some trust with Watson. He’s dangerous after the catch too.

That’s some serious shake in space by Akins and then he has the wherewithal to bowl over some smaller defenders in his path to pick up more yards. Expect the Texans to try and get Akins on Devin Bush and Terrell Edmunds in certain situations on Sunday.

In the backfield, David Johnson was the key piece in return for Hopkins in the off-season trade. He hasn’t quite put up the numbers, but he looks healthy and is playing more than 90% of the offensive snaps for Houston. Don’t expect him to come off the field much – if at all – on Sunday.

In Week 1 at Kansas City, Johnson flashed early, showing off his 2016 form with his vision and speed.

This was an excellent run from him out of gun.

If Johnson can return to 75 percent of his All-Pro form, look out.

The main issue in Houston currently is the offensive line, which they’ve invested heavily in.

This is how I expect them to line up left to right on Sunday:

Tunsil is the cream of the crop at left tackle in football, but he’s gotten off to a bit of a slow start in 2020 and is dealing with an elbow injury, which has limited him in practice this week.

I really like the left guard and center combination in Scharping and Martin. Martin is grossly underrated at center in the NFL, while Scharping started right away as a rookie and has put some decent tape together.

The right side of the line has been a mess the first two weeks of the season. Fulton is much better as a run blocker than pass blocker, while Howard is still a raw project.

This offensive line could be in for a long, long day on Sunday.

On special teams, kicker Ka’imi Fairbairn is an emerging star at kicker for the Texans, while punter Bryan Anger is the long-time veteran with the big leg. It’s a very solid specialists duo in Houston. Fairbairn, for what it’s worth, is a career 83% field goal kicker and put together an impressive 37-for-42 season in 2018.

Kick and punt returner DeAndre Carter is uber dangerous with the football in his hands, so Pittsburgh’s special teams units have to be on their game on Sunday.