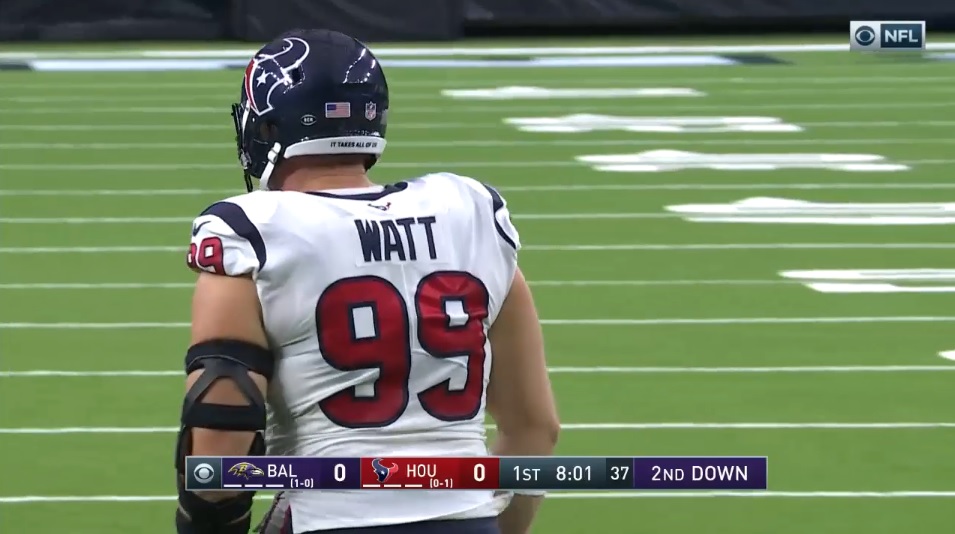 The run defense statistically hasn’t been great, 31st at an ugly 5.6 yards per carry. But the caveat here is they’ve faced two of the top offenses in football in Kansas City and Baltimore, two teams who built leads and ran the ball to close out their victories.

Every run defense is varied but the Texans feel a little more old school. Not a lot of gap shooters up front. Goal is to free up their linebackers. It shows in the stat sheet. Linebacker Zach Cunningham leads the team with 22 tackles. Those total tackles rank tied for 5th most in football and his 16 solo tackles are tied for third most in the league entering Week Three. Benardick McKinney is a big thumper who gets to play clean by the scheme up front. Watch him work unblocked and fill his gap here.

The Texans will play essentially a 5-1 front with everyone on the line of scrimmage. That leaves them vulnerable to toss plays on the perimeter if you can crack/leverage their ends up front. Chiefs had a great example of it.

JJ Watt primarily lines up as the RDE but they’ll align him over center in a lot of run situations, too. He isn’t a static player on this defense. Few elite players are.

They rank 15th in yards per attempt allowed so basically smack dab in the middle. The most notable stat with this defense is the lack of takeaways. Yet to force one in their first two games. Pittsburgh has turned it over at least once in 25 straight, an absurd streak, so something’s gotta give here.

JJ Watt has two sacks, the only Texan with multiple of them. While Houston is 6th in blitz rate at 35.9%, they are 27th in pressure rate at just 15.6%. So they’re having a hard time ginning up a pass rush even when sending extra rushers or sending them creatively.

It’s hard to peg the coverage scheme for this group. Against the Chiefs, they ran a ton of man coverage. Against Baltimore, it was much more of a mix of man and zone. And they had spies and QB contain on both Patrick Mahomes and Lamar Jackson. Ben Roethlisberger won’t create the same concern and in a sense, Houston will get to play with all 11 on defense for the first time this season. One guy isn’t dedicated to keeping the QB in the pocket.

Generally, they play more Cover 3 and zone against 3×1 looks and more Cover 1 against 2×2 sets. Against man, you can definitely create problems by using picks and rubs the Steelers’ offense has been effective using early on.

And while it’s just one play, the Chiefs ran the Tunnel Screen for a touchdown the Steelers and several other teams used in 2017-2018 to a high level of success. Pittsburgh might bring that back to Smith-Schuster, Claypool, or Washington if they get near the goal line Sunday.

In 3rd and long, Houston will go with quarters personnel, a 2-2-7 defense. I couldn’t pick up any exact blitz trends but they’re not afraid to twist, stunt, and bring DB pressure, though no DB has recorded a sack for them this season.

Someone at the NFL scheduling office is not a fan of the Houston Texas.  They come into week three looking for their first win of the season after opening with Chiefs and the Ravens.  Now they come to Pittsburgh in week three hungry to get into the win column.

The defensive line is versatile and is led by J.J. Watt. You may know him as the older brother of T.J. Watt and Derek Watt. He’s pretty good though. Three time defensive player of the year and 5 time All-Pro. He’s a high motor, disruptive defensive end who will kick inside as well so all offensive lineman need to be aware of where he is. Next to him is the nose tackle Brandon Dunn. The high effort run stopper who plays with good leverage and strength to keep the linebackers clean to make more plays. At the other defensive end is Charles Omenihu the long armed second year player with good quickness looking to improve in his first year as a starter. He uses his length and leans in his pass rush and had his first career sack last week.

Dunn (92) lined up as the 1 tech shows solid burst and good leverage and power to push the RG back as he works down the line hustling to make the tackle.

The reserve defensive lineman include DT P.J. Hall who’s a high motor, athletic defensive tackle with a good burst who’s improving steadily year over year. He had 5 tackles in 17 snaps in week one. Carlos Watkins will play in the 3-5 tech areas and has good quickness at the snap but plays with inconsistent pad level. They also have athletic rookie Ross Blacklock who has a good combination of strength and quickness and chases the ball well.  He was ejected last week after and unnecessary roughness penalty.

At inside linebacker the Texans have Zach Cunningham and Benardrick McKinney.  Cunningham is a long, lean defender who diagnoses plays well and has sideline to sideline athleticism which also allows him to cover tight ends and running backs one on one and use his length to his advantage. McKinney is the thumper inside weighing in at nearly 260 pounds and is the attacking, gap filling linebacker. Dylan Cole backs up the inside linebackers. He’s a strong tackler and loves being physical.

Cunningham (41) is lined up as the left outside linebacker.  He processes this run well keying on the QB. He scrapes to the outside using his hands to keep the blocker at bay and make the tackle near the LOS.

On the outside they have Whitney Mercilus, the veteran pass rusher mixing speed and power with active hands. The other starter on the outside is Brennan Scarlett a high effort player who is solid at the point of attack but is just solid athletically overall.  The primary backup is Jacob Martin who plays on the outside who shows quickness in his pass rush but tries to duck around blockers taking them on which will put him out of position.

Listed at the left corner back is the veteran Bradley Roby. He has good size, speed and athleticism and his aggressiveness makes him a fit for Man coverage.  On the other side is Vernon Hargreaves another former first round pick by another team like Roby.  He has good agility and quickness with acceleration to close on balls in the air. Justin Reid is the strong safety and will spend a lot of his time near the line of scrimmage.  He’s a very good tackler and attacks against the run. He’s one of the better players on this defense.  The free safety is Eric Murray. He has good awareness, speed and versatility and when they switch to Nickel defense he will move into the slot.

Here is a play by Reid (20) against the Ravens. He’s lined up in the box as the right outside linebacker.  He reads the run play well, mirrors to the outside and shows good burst to avoid the blocker and make the tackle for a loss.

Lonnie Johnson comes in on Nickel packages and plays the deep safety position.  He has great size and length and tracks the ball well.  Safety A.J. Moore makes his mark on special teams but will come in as the sixth DB in Dime coverage. He has good speed but lacks the length to play on the outside. Philip Gaines is another corner with size and length with very good speed that backs up on the outside.