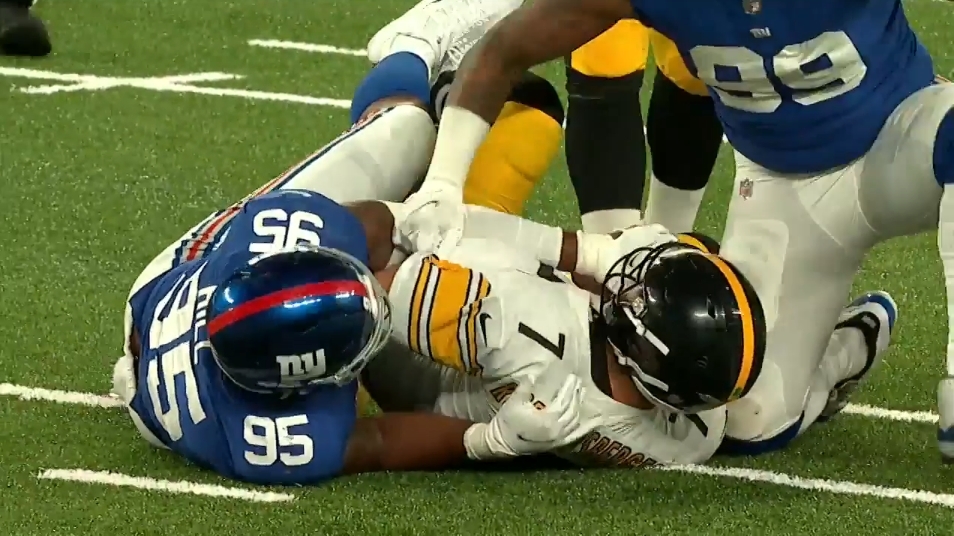 For the first time of 2020, we’re breaking down the two sacks allowed by the Pittsburgh Steelers in their Week One opener against the New York Giants. If you’re new here, we break down the play, assign blame, and also take a quick look at o-line penalties at the end.

Initially a two man route with both tight ends, Vance McDonald and Eric Ebron, checking and releasing. Ultimately five linemen on four pass rushers. Ben Roethlisberger looks to bail a little too quickly here, dropping his eyes and starting to run, but this is a nice rep by Lorenzo Carter (#59) against right tackle Zach Banner. Good punch into Banner’s body to get him off-balanced, Banner crossing his feet (a no-no for a linemen), and winning inside. Doesn’t ultimately get the sack, that goes to Dexter Lawrence working off Alejandro Villanueva to finish the play.

Though Roethlisberger looked a little panicked here, tackles can’t allow pass rushers to win inside. Force them upfield and let the QB climb. Banner loses this rep and I’ll put the sack on him.

Not too often the Steelers allow a sack on a three man rush. But happens here. Giants drop out and only bring three but Ben Roethlisberger keeps dropping and getting depth. By sacks end, he’s dropped 12 yards from the line of scrimmage. A tackle can only block for so long as the QB backs up. The further he goes, the easier angle a pass rusher has to now go around the tackle as opposed to going through him.

Villanueva does get out-leveraged against Leonard Williams (#99) and bullrushed back, no doubt about it, but Roethlisberger gets way too much depth here. Against a three man rush, hitch, climb the pocket, and roll out if need be. Not #7’s best play of the night. Reminder that pass pro isn’t just on the offensive line. A quarterback’s depth can be just as important.

It’s also worth talking about the route. Weird designed, especially to the left side, Roethlisberger’s first read. I…really don’t know what Pittsburgh’s trying to do here. Guessing someone screwed up, maybe Benny Snell since he hasn’t spent a lot of time aligned wide. He’s blocking so I assume he believes Diontae Johnson is getting the screen up top but Roethlisberger doesn’t throw it. James Washington is open to the bottom had Roethlisberger progressed to him.

Ultimately putting the blame on Ben for not climbing and missing an open receiver when that could’ve been the final part of his read. I generally don’t get on QBs missing open receivers because you don’t always know the progression of a play but Roethlisberger could’ve found Washington here.