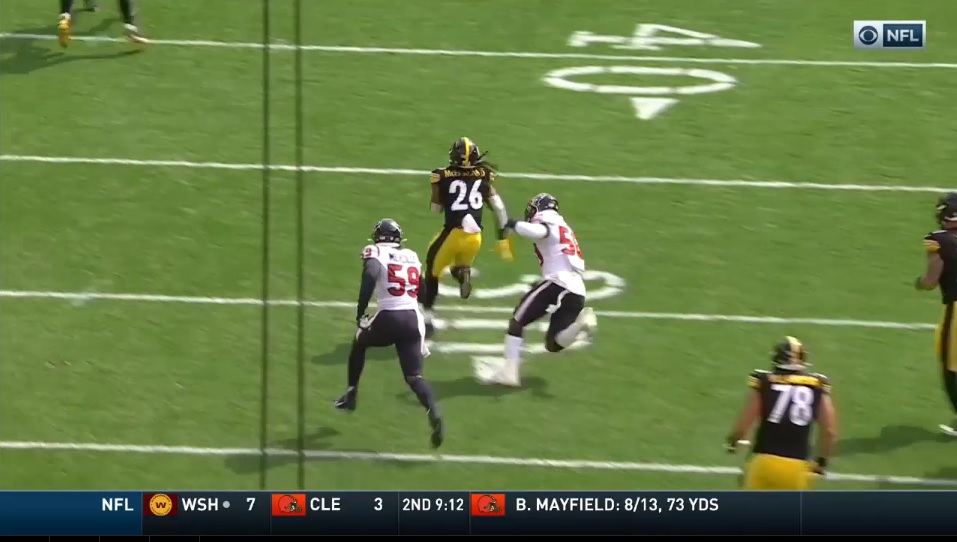 The training wheels came off in week three with Claypool. Due to the loss of Diontae Johnson to concussion protocol Claypool spent much more time on the offense leading the receivers in snaps. That didn’t result in a lot of production as he only had one catch. However that one sealed the victory in the fourth quarter showing quickness to make one tackler miss and strength to break another tackle. He fumbled near the goal line but it luckily bounded out of bounds. Two of his other targets were passes broken up and the other was a red zone target. He also drew a pass interference penalty on a fourth down play.

His route tree blossomed in week 3 with him being used in just about every route possible on all three levels.  He was open more often earlier in the game and later in the game didn’t earn a lot of separation on his routes. They also used him as lead blocker a couple of times as you’ll see in the clip below.

His special teams play was more limited this week due to all his work on the offense and he did not register a tackle.

Here is Claypool (11) being used as a lead blocker. It’s a nice wrinkle they added even if he didn’t block anyone. But if Chukwuma Okorafor (76) doesn’t miss his block this could be a good gain.

Highsmith’s usage was on par with the first two weeks. In his eight snaps, 4 were pass rushes and 4 were runs.  On his first pass rep he allowed a hand to his chest and provided no pressure and followed that with a spin that didn’t work.  His last two were a solid bull rush to push the right tackle back in the pocket and as the penetrator on a twist with Tyson Alualu that forced Watson out of the pocket to Bud Dupree for a sack.

Against the run his showed good effort overall but gave up the edge on the David Johnson rushing touchdown. He did make a really nice play on his tackle taking on the RG with his inside shoulder, keeping the outside clean, allowing him to reach out and corral the running back.

On special teams his blocking was solid. I like how he looked for people to block on kick returns. His effort was good overall on kick and punt coverage but it did not lead to a tackle.

This is Highsmith’s (56) tackle. The technique is good and good strength to catch and tackle.

Seven touches in 10 snaps for McFarland show they had a plan to use him. He also opened up the second half with 4 consecutive touches. He has admitted his adrenaline was flowing early in the game and it looked like it on his first run. To me, he didn’t look as quick as I expected and his mind may have been going faster than his body. He settled down and looked quicker as the game went on able to run past linebackers that looked to have good angles.

In the passing game they motioned him out wide to the right isolating him on a linebacker, a matchup he should be able to win more times than not. They also used him on a screen which I felt he was a little too overzealous on getting too far wide of his blockers giving David DeCastro no shot to get out in front.  His timing and spacing will get better.  Good start overall for him.

This isn’t his flashiest run but I like the ability to create something from nothing.  The Texans play this well and look to have him bottled up. DT P.J. Hall (96) seems to have the jump on him but McFarland (26) makes a jump to his right to avoid him and cuts inside J.J. Watt (99) to get 2 yards.

Dotson was a reserve for this game and did not enter the game.

Pierre had mixed results on his blocking of gunners. He has two solid blocks alone and one with help and also had 4 others where he didn’t get a hand on the gunner.  He was also used on kick off cover and had no tackles. The team took Claypool out as gunner due to his work on offense and Pierre took his place and he did well.  He beat the blocker on his first attempt on a punt that wasn’t returned. His second rep was really good splitting a double team block at the line of scrimmage and winning the race downfield.  He didn’t get credit for the tackle but he was in on it.

Here is the rep of Pierre (42) beating the double team and getting in on the tackle.