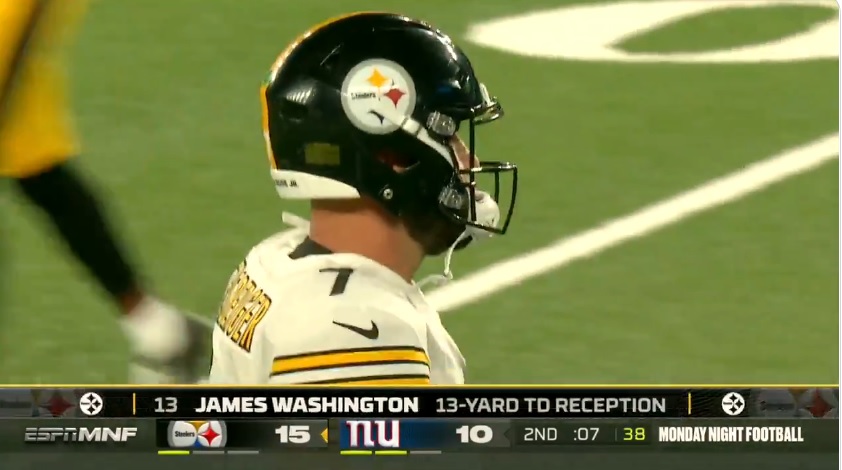 Two interceptions by the defensive line, including one in the red zone, helped propel the Pittsburgh Steelers to a 26-16, opening game win in primetime over the New York Giants.

The Steelers defense stifled Saquon Barkley all night long, holding him to negative eight yards rushing on eight carries in the first half. He finished with six yards on 15 carries overall.

The defense was engineered by dominating performances from Bud Dupree and TJ Watt, who made the night for the Giants offensive line a nightmare. Watt recorded one of the interceptions, and Dupree forced the other and finished the night with four total tackles, two tackles for loss, and one sack.

It was an ugly first quarter for the black and yellow, with Diontae Johnson muffing the initial punt, setting up the Giants with a first and goal. The Steel Curtain defense stood tall, only allowing a field goal.

After the Steelers connected on a field goal on their second drive to tie the game up at three, a questionable Defensive Pass Interference Call on Joe Haden led to a 41 yard touchdown from Daniel Jones to Darius Slayton to put the Giants up 10-3.

The Steelers would go three and out for the second time in three possessions and the offense looked sluggish before TJ Watt intercepted a Daniel Jones pass early in the second quarter.

Watt’s interception set the Steelers up with great field position, and Ben Roethlisberger dissected the Giants defense and connected with JuJu Smith-Schuster for touchdown. The 38 year old quarterback started the night off slow, but over the course of the game began hitting Smith-Schuster and James Washington. He would complete 21 of 32 passes, 229 yards and three touchdowns.

Roethlisberger would connect with Washington for another touchdown right before halftime, to put the Steelers up 16 to 10 at the break.

The second half was dominated by a 19 play drive by the Giants, with Daniel Jones picking up five first downs on third or fourth down, including running for one himself. The Giants were on the Steelers four yard line before throwing an interception to Cam Heyward, caused by the pressure Bud Dupree brought to Jones. The second year-quarterback spent most of the night dealing and running from the pressure, with the Steelers hitting home for three sacks. He would finish his night only completing 26 of 41 passes, 279 yards, two touchdowns and two interceptions.

The turnover would lead to a Steelers 36 yard field goal by Chris Boswell to put them up 19-10 in the fourth quarter.

The fourth quarter would be dominated by Benny Snell and Dionte Johnson’s third down conversions for the Steelers offensively. After the defense forced a punt early in the fourth, Johnson would pick up two of the four first downs on a 11 play, 75 yard drive capped off by a JuJu-Roethlisberger touchdown connection to put the black and yellow up 26-10 midway through the fourth. Snell helped put the Steelers in the red zone with a 30 yard burst on that drive. Snell finished the night with over 100 yards rushing on just 19 carries. Unfortunately for the Steelers, Zach Banner went down with an apparent leg injury on that drive.

The Giants would score a garbage time touchdown, Jones to Slayton again, making the final score 26-16.

The Steelers will have their home opener in week two against the Denver Broncos, who will be in action later tonight against the Tennessee Titans. The game is a one o’clock start, eastern time.