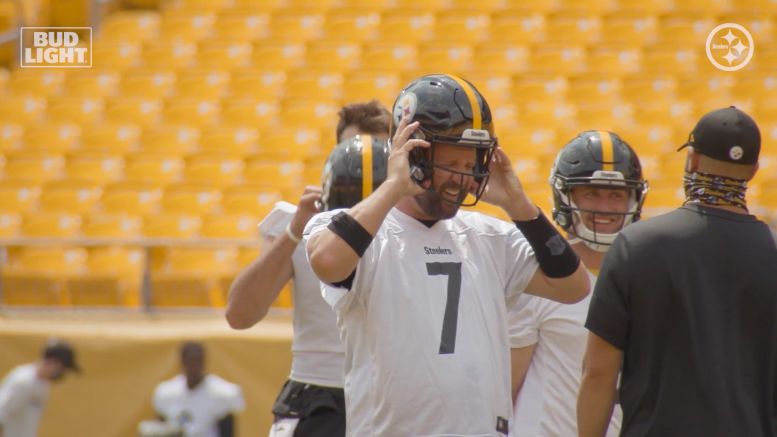 Ben Roethlisberger is as battle-tested as any quarterback in the league. But even veterans like him can get a little nervous. Roethlisberger admitted he’s expecting pre-game jitters right before the Monday night opener against the New York Giants.

“I’ll tell you what, I was driving in today,” he told reporters via Zoom call Wednesday morning. “This is no joke. Crossing the Veteran’s Bridge. And I was thinking to myself, man, I’m actually like nervous for the season. You always have a little bit of jitters and nerves for the first game, but  the way I feel now is more than I’ve felt in a very long time. I’m sure it’s only going to intensify as the week goes on. And then Monday night, I’m sure I’m going to be shaking like a leaf, but, it’s gonna one of those things that you get out there and hopefully it all comes back to me really quick.”

Monday night will the first regular season passes Roethlisberger’s thrown since September 15th, 2019, shut down after tearing three tendons in his elbow. It’s a new world Roethlisberger’s returning too as well as the NFL attempts to play football in the middle of a global pandemic. The Giants won’t have fans for the opener, making the night feel all the weirder.

Though Roethlisberger admits he’ll be nervous, he said it’d worry himmore if he wasn’t.

“If I wasn’t nervous and I didn’t have that anxiousness, then I think that you shouldn’t be out there, right? There’s not a love for the game if you don’t have that. And then I think since I have those nerves already just shows that I still love this game and so passionate for it. I want to go out and win for my teammates and the fans and the city.”

Roethlisberger is among the biggest competitors in the Steelers’ locker room. He’ll look to bounce back following an offseason filled with outside doubt from national media. Analysts who assumed his career was over, that Roethlisberger was overweight, washed up, and would quickly follow Eli Manning into retirement. He’s proven those assumptions inaccurate.

Though he’s excited to return to football, there are undeniable consequences to missing so much time and not even having the benefit of preseason to sneak in a few reps. Roethlisberger said he hopes to shake off the rust quickly.

“There’s going to be rust. There’s no doubt about it. But hopefully we can get it knocked off sooner than later.”

Roethlisberger will be throwing to some familiar faces like JuJu Smith-Schuster and Vance McDonald but also several new ones. There’s tight end Eric Ebron and receiver Chase Claypool. Even second and third year receivers like Diontae Johnson and James Washington haven’t caught many passes from Roethlisberger. A lack of timing and cohesion with those guys are potential stumbling blocks out of the gate.