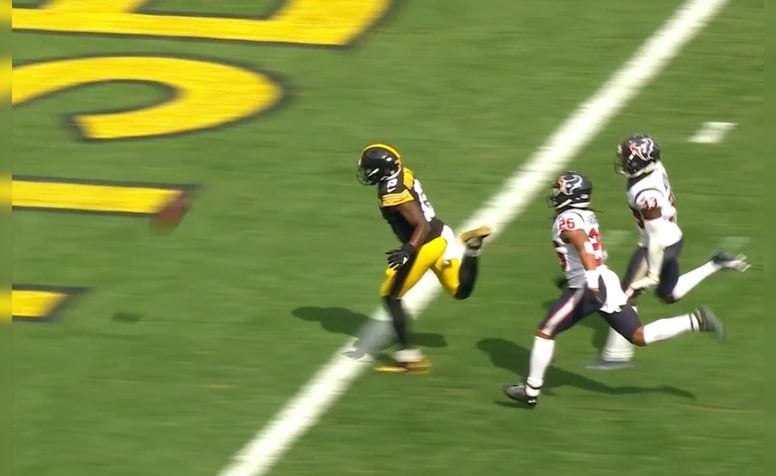 Statistically, Pittsburgh Steelers quarterback Ben Roethlisberger had a good game in the team’s Sunday home win against the Houston Texans as he completed 23 of his 36 total passes attempted for 237 yards and two touchdowns in addition to not throwing an interception. While Roethlisberger was sharp in that contest with his shorter throws of 15 yards or less, he struggled to connect with his deep throws of 16 yards or longer against the Texans at Heinz Field.

According to our initial game charting from Sunday’s game against the Texans, Roethlisberger attempted eight passes that flew more than 15 yards in the air past the original line of scrimmage and he failed to complete any of them. One of those eight, however, a deep pass down the middle of the field to rookie wide receiver Chase Claypool, drew a pass interference penalty so that throw wasn’t all for naught, even though it was as a bit of a gift call in the Steelers favor.

Of Roethlisberger’s other seven incomplete deep throws against the Texans, over half of them weren’t close to being completed and that includes a deep shot to wide receiver James Washington in the end zone with a little more than 11 minutes left in the third quarter. On that play, Washington seemingly had two Texans defensive backs beat by at least a step down the left seam but Roethlisberger’s pass to him was roughly 4 yards too long. That possession ultimately and unfortunately ended with a field goal.

“I missed a lot of throws,” Roethlisberger admitted after the game. “Overthrew some balls down the field. I hate having those misses, but you win a football game and you’ll take it.”

In total, Claypool was the target on four of Roethlisberger’s deep throws on Sunday. Two of those four were seemingly on target, however. Three of his other missed deep connections went to wide receivers JuJu Smith-Schuster and Diontae Johnson with the latter of the two being a target on back-to-back plays late in the third quarter.

Roethlisberger’s longest completion on Sunday was a 15 yard pass to Washington along the left sideline on a 3rd and 16 with 6:18 left in the third quarter. That low completed pass was a yard short of the sticks, however, and the Steelers were forced to punt. Roethlisberger’s first half touchdown pass to tight end Eric Ebron might have been about 15 or 16 air yards as well, but it was caught in the end zone and thus official went in the books as a 10-yard pass.

While Roethlisberger failed to complete a deep pass on Sunday, it’s probably too soon to be worried about those types of throws when it comes to him. Prior to Sunday’s game against the Texans, Roethlisberger was 6 of 12 on deep passes thrown more than 15 yards past the line of scrimmage with two touchdowns and an interception.

In Week 4, Roethlisberger and the rest of the Steelers offense will face a Tennessee Titans defense that has allowed 7 deep pass completions on 19 total attempts. Two of those completions went for touchdowns with one of them being a 71-yard completion from Minnesota Vikings quarterback Kirk Cousins to rookie wide receiver Justin Jefferson on Sunday.