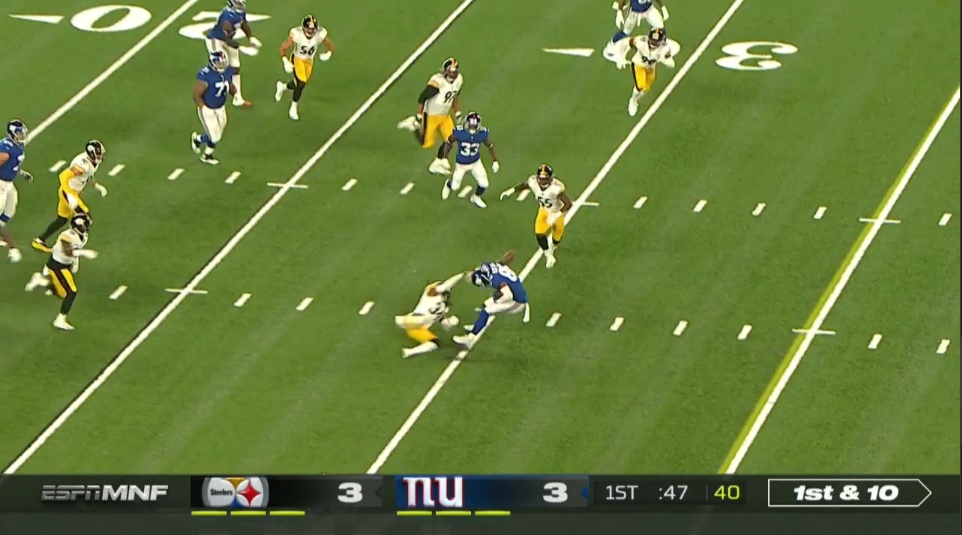 With no preseason and very few live tackling drills in an abbreviated Training Camp at Heinz Field, I was pretty worried about the Steelers’ tackling performance heading into Monday night’s season opener in New Jersey against the New York Giants.

Coming out of Monday night’s 26-16 win, I feel pretty good overall with the Steelers’ performance. Overall, the Steelers really didn’t miss many tackles on defense. In fact, just under half of the missed tackles I charted in Monday night’s game came on special teams. I am a bit concerned with that, but I will chalk that up to the first game of the season with no preseason.

Let’s take a look at my charting from Monday night’s win.

It wasn’t a great start to the season for Mike Hilton overall in the tackling department as he struggled to bring down Saquon Barkley and Dion Lewis at times in the game. Aside from Hilton defensively, the unit could have had an even better day if Bud Dupree and Ola Adeniyi finished off their sacks of Daniel Jones instead of letting the second-year pro slip out of their grasp.

Let’s take a look at some of the worst misses by the Steelers Monday night.

Terrell Edmunds had a pretty strong night in the tackling department for the Steelers, but he got off to a slow start with this miss against wide receiver Darius Slayton in space.

Edmunds does a good job driving downhill on the short throw, but he goes in too high and allowed the diminutive Slayton to duck underneath, leading to the second-year receiver picking up a first down late in the first quarter.

The Steelers asked Hilton to blitz quite a bit on Monday night, and for the most part he did a really good job creating havoc behind the line of scrimmage.

Here though, he comes in out of control and fails to break down for the TFL, allowing backup running back Dion Lewis to hit him with a slick jump cut to the outside, leaving Hilton grasping at air in the backfield.

Later in the game, Hilton recorded two more misses as Barkley hurdled him twice – once on the screen pass from deep in Giants territory, and then once on a broken play in which Jones shoveled the ball to Barkley to avoid a sack.

Spillane and Claypool both missed here in punt coverage against Peppers.

Claypool dove for his legs but Peppers was able to high-step it out of the tackle attempt. From there, Spillane over pursues, allowing Peppers to cut inside him and hit the seam upfield for a 20-yard gain that realistically should have been held to roughly 5 yards.

Offensively, the Steelers did a nice job forcing missed tackles Monday night against the Giants, recording 11 forced missed to end the Week 1 contest in a draw in the tackling department.

The usual suspects like Diontae Johnson and James Conner stepped up in the forced missed tackles department on their touches, but it was Benny Snell Jr. who led the way for the Steelers Monday night.

You might be seeing Conner’s name and think “really?” Early in the game Conner did a decent job of forcing defenders to miss behind the line of scrimmage. Unfortunately, he couldn’t do much else with the football after that before leaving with an injury.

Snell ran hard on Monday night and personally made rookie cornerback Darnay Holmes his personal punching bag early on. More on that later

Johnson was pretty solid at making the first man miss on the punts he attempted to return, while Roethlisberger somehow shrugged off a Lorenzo Carter sack before ultimately going down to Dexter Lawrence Jr.

Shortly after taking over for Conner, Snell went right to work. One play before this he ran over Holmes on the right sideline on a short gain. The very next snap he showed some good lateral movement to jump inside Holmes, sparking the Steelers offense slightly.

This is the type of run we saw from Snell late in the 2019 season, but he just looks more explosive here, thanks to the weight loss.

Later in the first half, James Washington came through with the first true “effort” play of the year.

Washington refused to go down, muscling through Adrian Colbert to score the late touchdown right before the half. Washington really showed off his farm strength there.